Phase Two of Work at Historical Landmark in East Liverpool 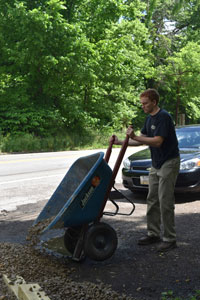 Students in the landscape construction class, taught by Stan Jones on the Salem Campus, were back in East Liverpool where they worked on the second phase of a beautification project at the Point of Beginning – an often overlooked registered national historic landmark that had fallen into a state of neglect in recent years.

The class used wooden beams and 18 tons of rock to create an area for visitors to walk to the historical marker that stands at the site. The work is partly funded through an environmental grant from Heritage Thermal Services this past spring. 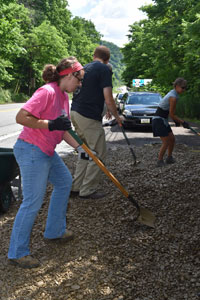 Last year, Heritage Thermal Services awarded Kent State East Liverpool a similar environmental grant. That money was used by Jones and his students to tackle the first phase of the beautification project, which included building a wooden fence backdrop that also serves as a barrier to the hillside behind the site’s monument.