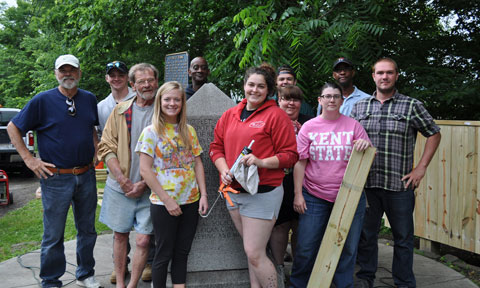 Students in the landscape construction class, taught by Stan Jones on the Salem Campus, traveled to East Liverpool where they worked on the initial phase of a beautification project at the Point of Beginning – an often overlooked registered national historic landmark that had fallen into a state of neglect in recent years.

Noted author Simon Winchester visited the site a while ago and later made a presentation to the Carnegie Council for Ethics in International Affairs, during which he lamented the historical importance of the site and called attention to its “disrepair.”

Shortly afterward, members of the local community began an effort to make the site more attractive and inviting to passing motorists.

Heritage Thermal Services awarded Kent State East Liverpool a $1,000 environmental grant during CitySweep this past spring. That money was used by Jones and his students to tackle the first phase of the beautification project, which included building a wooden fence backdrop that also serves as a barrier to the hillside behind the site’s monument.

If additional financial support is received, Kent State East Liverpool officials hope to continue the beautification project with concrete curbing, shrubbery, flowers and walkways. Anyone interested in helping with this project can contact Leonard Koshinski, director of advancement, at 330-382-7559.