Kent State University at East Liverpool announces the completion of work to celebrate the naming of John J. Purinton Hall, the main classroom building at Broadway and Fourth streets and the former location of East Liverpool High School. 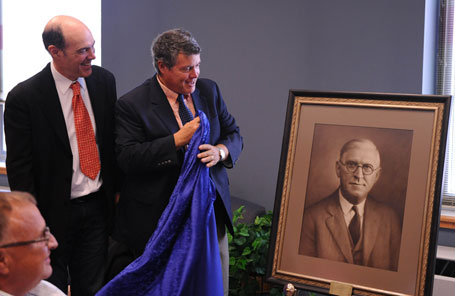 A dedication of the building’s naming was recently held during a private ceremony with family and friends in the building’s second floor Quiet Study Lounge.

The naming of the classroom and office complex was made possible by a generous gift from Purinton’s granddaughter, the late M. Patricia Burnett. According to her sons, Peter, Tom and Chris, Burnett wanted to celebrate her grandfather’s interest in improving the quality of life in East Liverpool.

“She was committed to seeing the city of East Liverpool and Kent State University at East Liverpool flourish,” Tom Burnett said. “We are excited to know that our mother’s gift will also provide improved facilities and an endowed fund for Kent State East Liverpool’s current and future occupational therapy students.”

The north and west entrances of the building have been reconstructed with columns to bring the architecture back to its intended form. 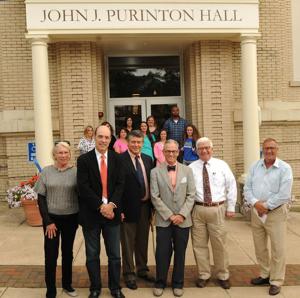 The building is now named after local prominent banker and civic leader, the late John J. Purinton, who was secretary of the Potter’s Savings & Loan Co. of East Liverpool.  He was also one of the founders of the United States Pottery Co. of Wellsville which manufactured semi-porcelain and decorated ware. Purinton served as a state senator, president of City Council and a leader of numerous other civic and government organizations.

“Mrs. Burnett’s interest in benefitting Kent State University was an expression of her mutual devotion to both family and community,” Nameth noted. “Her passion for higher education was derived from her own education, personal experiences, world travels and awareness of the importance of education for improving human health and well-being”.

Burnett grew up in East Liverpool and had a positive impact locally, nationally and globally through her community service outreach. She was a fervent supporter of the Mary Patterson Building and University District projects, as well.

“Her special commitment to Kent State comes from her devotion to her hometown, admiration for the civic leadership of her grandfather and her belief that East Liverpool needs institutions of higher learning to grow economically, culturally and spiritually,” Nameth continued. “Her gift to the campus was tied to her deep respect and admiration for her grandfather and we are truly grateful for her generosity.”

He concluded by noting that it was an honor to submit this naming recommendation to the Kent State University Board of Trustees, which approved the naming of Purinton Hall in 2010 and affirmed it in 2013.

Photo Caption - Top: During a private ceremony held at the Kent State East Liverpool campus Chris and Peter Burnett unveiled a photo of their grandfather John J. Purinton that will hang in the Fourth street entrance of the newly named Purinton Hall.