Kent State University at Salem recently held a reunion to celebrate 30 years of offering radiology technology degrees on its campus, bringing together faculty, alumni, current students and members of the local medical community.

In welcoming the guests to the anniversary event, Jan Gibson, senior program director of the Kent Salem radiology programs, acknowledged the foresight of those who started the programs and related the historical chain of events that helped the program evolve into one of excellence and high standards. 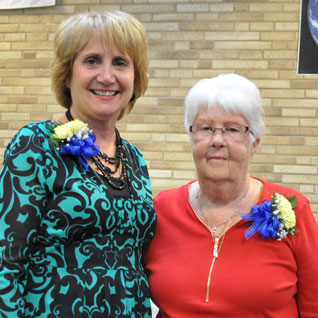 “For the Kent State Salem radiologic technology program, the first 10 years began with Roy and Shirlee Bell, Dawn Dickey, Carol Kuner and Mickey Zerbonia as instructors and clinical coordinators,” Gibson related. “They laid the foundation for the program to grow and succeed in so many ways. The students they graduated are the current leaders in the area serving as mentors, supervisors and educators to our current students.”

During the second 10 years, the program expanded its clinical sites and increased the number of students accepted. It also made changes to the curriculum to meet the needs of the graduates. It was during this time that Margie Iagulli was hired, working with clinical coordinators Carol Kuner, Mickey Welsh and later Gail Schroeder.

Sherry DeWitt is the secretary for the radiology programs.

“What all of these people have in common is their dedication, commitment, enthusiasm and loyalty to the students of all of these programs,” Gibson noted. “I thank them for the work they do.”

Students are trained in state-of-the-art labs and classrooms on the Salem Campus, and are welcomed at 22 clinical educational settings throughout the region. In the 30 years since the program began, more than 900 students have graduated from it.

“Of course it is because of the students and graduates that we are here today,” Gibson continued. “They put so much energy into their education and they have so many outside responsibilities to families and jobs. It is not an easy task to get accepted into these programs and graduate with these degrees.

“We commend them on their dedication in securing a future into the world of radiology. It is a future that we cannot even imagine, with the ever-changing technology innovations in medical imaging,” Gibson concluded.

One of the guests of honor at the event was Shirlee Bell, who, along with her late husband Roy, started the radiology technology program on the Kent Salem campus in 1985.

She related how her late husband worked with Dr. Frank Apicella to establish a hospital-based radiologic technology program at, what was then, Salem City Hospital. Mr. Bell later transferred the program to the Kent State Salem campus, where it was developed as an associate degree program. The first class had 19 students.

Shirlee Bell worked as a staff radiographer at Salem Central Clinic and Salem Community Hospital, after graduating from the radiologic technology program at Salem City Hospital in 1955 and after receiving her associate degree in technical studies from Kent State.

She became an instructor of radiologic technology at Salem Community Hospital, working there from 1966 to 1986, holding positions as instructor, clinical coordinator and program director. In 1985, she began working part-time as a faculty member at Kent State Salem and became a fulltime faculty member and clinical coordinator in 1986. In 1990, she served as acting program director and later served as the assistant to the dean until her retirement. She now lives in Toledo near her daughter and grandchildren.

Also speaking at the event were Dr. Peter Apicella, medical advisor to the Kent radiology program and current chairman of the Medical Imaging Department at Salem Regional Medical Center; Joan Parsons, retired executive vice president and chief customer officer of the American Society of Radiologic Technologists in Albuquerque, N.M., and former program director for the Aultman School of Radiologic Technology and assistant administrator of the department of radiology at Aultman Hospital; Cyndi Peterson, a member of the first class at Kent State Salem and now the program director for the diagnostic medical sonography program for the local campus; and Dr. Steve Nameth, dean of the Kent State Columbiana County campuses.