Rural Scholars Participate in “Anatomy of a Brain” Workshop

The Rural Scholars Program prides itself on introducing students to a variety of career fields. The scholars come with varying interests, from graphic design to criminal justice to mathematics; however, one field that has always been popular is health science. The most recent workshop helped to address these interests. “Anatomy of a Brain” allowed scholars to dig into the fields of biology and medicine. 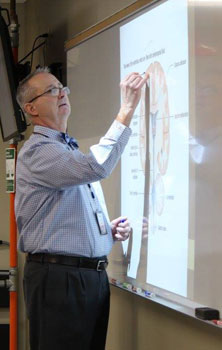 Dr. Dan Dankovich, a biology instructor on the Salem Campus, hosted this workshop, beginning with some important background information about the brain. Scholars learned about basic terminology, such as what different parts of the brain are called, while also learning about the functionality of this organ. They learned why our brain has so many folds, and what the different lobes control.

After they learned these key concepts, the scholars began dissecting sheep brains. They discovered the layers of fat designed to protect the brain, and then proceeded to explore the different lobes. Although some were a little squeamish about the process, many were more than willing to jump right in on this opportunity. After exploring the various parts of the brain, the workshop wrapped up with a discussion on the importance of dissections for future doctors.

While 68 percent of scholars expressed interest in careers in biology and medicine, 90 percent said the workshop helped them better understand these fields. “One interesting thing I learned today was all about the different parts of the brain, what they looked like, and what function they had,” one scholar shared. “By the end of the day, I could identify different parts!”

Scholars learned what future careers in medicine could look like from this hands-on workshop.

Photo: Scholars who participated in the “Anatomy of a Brain” workshop included (from left) Camryn Jackson, Shanna Miller and Izzy Jenkins.