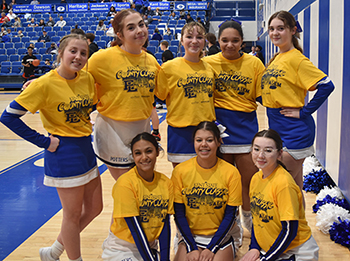 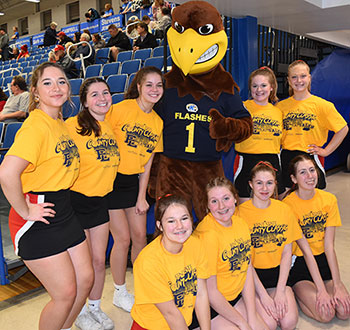 Until the final seconds of the contest, the winner of the seventh annual Kent State Columbiana County Classic basketball game between East Liverpool and Salem high schools was anyone’s guess. The two teams matched score for score for four quarters but, ultimately, the Potters claimed the win with a 72-69 score over the Quakers.

With the victory, ELHS leads the County Classic series 4-3.

Representatives from the Kent State Salem and East Liverpool campuses were in the stands cheering on the respective community high schools. Cheerleaders tossed t-shirts into the stands throughout the game and all players, coaches and cheerleaders also received shirts.

Always a favorite, Flash cheered and interacted with fans of all ages. 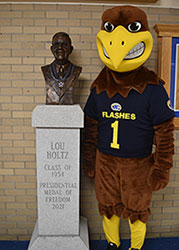 Cutline A:  Flash presented the County Classic traveling plaque to the East Liverpool Potters, who won this year’s contest over the Salem Quakers.

Cutline B: Cheers for the Potters!

Cutline C: Cheers for the Quakers!