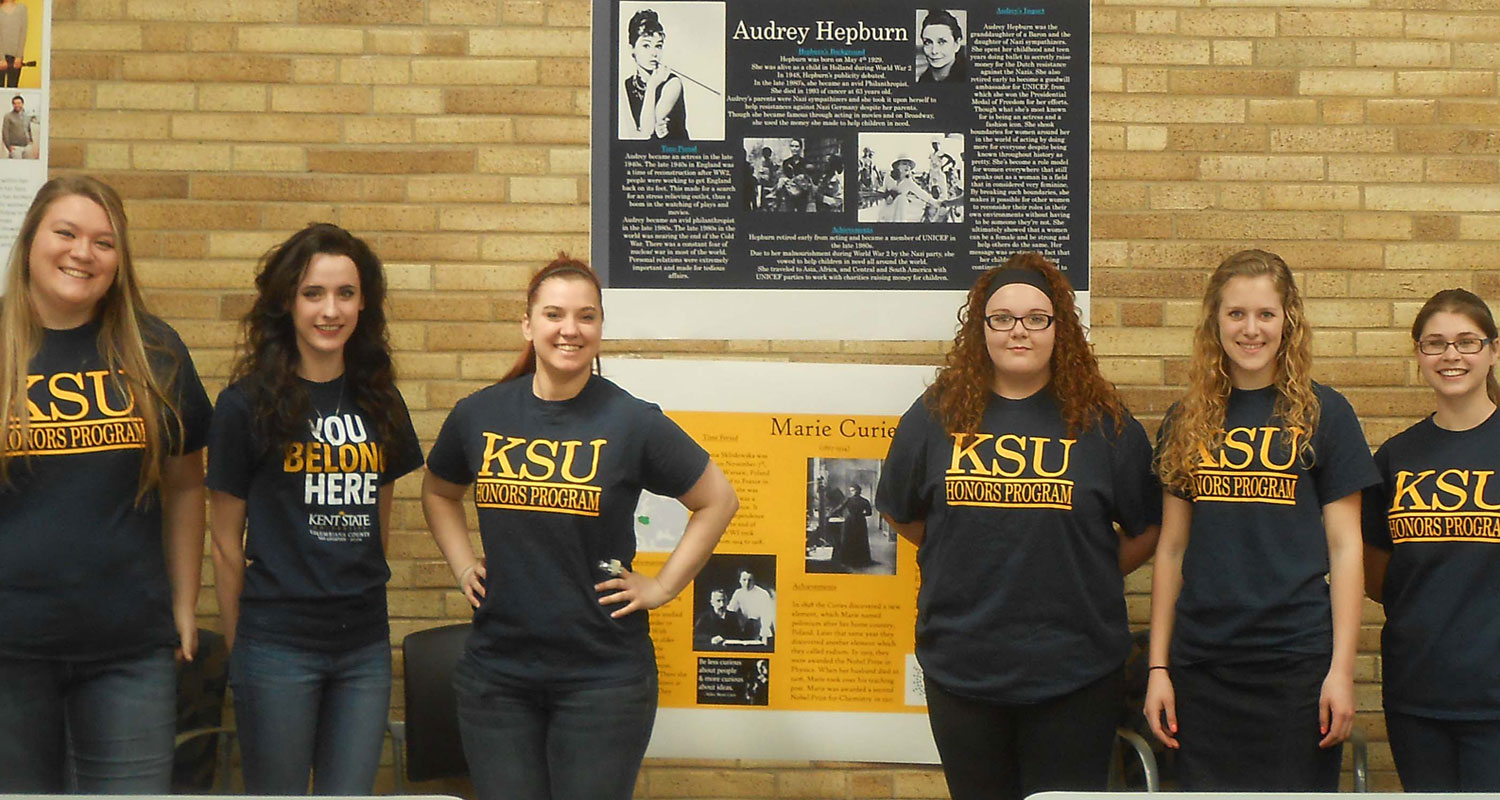 Six first-year honors students on the Kent State Salem Campus took the initiative to organize a research project that enhanced their learning experiences, despite not earning grades or class credit for their work.

“We chose to do this and organized it all ourselves. We were not pushed by anyone but ourselves to pursue this,” explained Brianna Parfaite, an English major. “We all gained so much more than any grade could have given us.”

The research project was named “Honorable Women Throughout History,” with each student choosing to study a different woman that she found to be inspiring. They worked through a timeline that began with the Revolutionary War and led to present day.

The students presented their research at on open forum on the Salem Campus, complete with oral presentations and posters. “We felt that by presenting our research we could encourage others to start their own projects and spread knowledge throughout the campus,” Parfaite shared. “It is hard to find positive female role models in the media today and, because we are all women, we latched onto this idea and decided to research some positive women.”

“When I went to Dr. Pfrenger with our idea about this project, he was more than supportive. He never limited our project and we plan to present even larger ones in the future,” Parfaite said.

“The first-year honors students took it upon themselves to develop this project to help promote the value of undergraduate research on our campus,” Pfrenger noted. “These research projects were not for a class, but for the sake of learning and the hope of inspiring that passion in others. Each student did an amazing job and I am proud of their work.”

Parfaite shared that working on this research project benefited not only the six of them, but others as well. “We were able to work together throughout every stage of this project, creating friendship and trust within our group. We were able to educate ourselves, the group and our audience. We learned by our own research and by the research of the group,” she said.

“We were able to incite interest and education on our campus. Many people, including staff and students, were intrigued by our presentations. Our audience learned about people and time periods that were new to them. Also, we were able to improve our public speaking and research skills,” Parfaite continued. “Organizing this much information and being able to present it is not an easy task for many students. This experience helped us to be leaders within our campus just by standing up and speaking out.”

The students and their research included the following:

Brianna Parfaite presented on Deborah Sampson: Deborah Sampson was a woman who disguised herself as a man and served 17 months with the Continental Army during the Revolutionary War. After she was honorably discharged, she spoke frequently in public about gender roles for women and became good friends with Paul Revere. He helped petition Congress to approve her request to receive a military pension, making her the first woman to earn such a right.

Skylar Wiggers presented on Audrey Hepburn: Born in Brussels in 1929, Audrey Hepburn was the first actress to win an Academy Award for a leading role when she was recognized for her acting in Roman Holiday – for which she also won a Golden Globe Award. She won Academy, Emmy, Grammy and Tony awards for her acting, but she also received the Presidential Medal of Freedom for her work with UNICEF.

Lindsey Rice presented on Muriel Faye Siebert: Known as the First Woman of Finance, Muriel Siebert was the first woman to own a seat on the New York Stock Exchange and was the first woman to head one of the NYSE’s member firms. She was born in Cleveland and attended Western Reserve University (now Case Western Reserve University), but left without graduating when her father became ill.

Conni Cross presented on Rebecca Sugar: Rebecca Sugar is an artist, animator, composer and director known for her award-wining animated short Singles, her graphic novel Peg Davis and her work on Adventure Time. She created the Cartoon Network’s Steven Universe, making her the first woman to independently create a network series.