When storms approach, most people heed the warnings by seeking the safety of shelter and waiting for the winds and rain to pass. There are many, however, whose jobs require them to respond and run into the storm’s path to help others.

That’s exactly what happened as the COVID-19 pandemic stormed into our lives and caused havoc in almost every aspect of life as we knew it. Many sheltered in place and many others were called to respond to the storm raging around us. 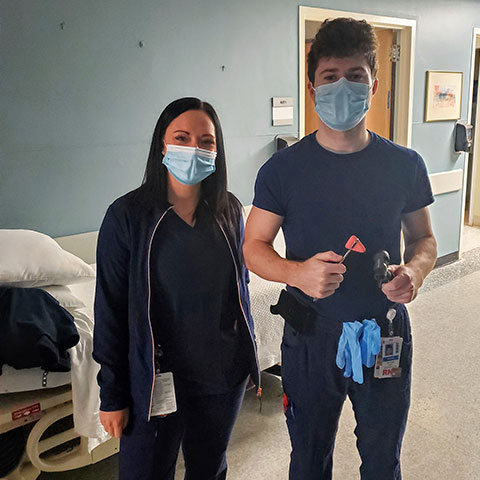 Two of those who responded, and found themselves in the eye of the storm, were Tony Koch and Brittany Bryte, both graduates of the Kent State Salem nursing program.

Koch, a 2017 graduate of Kent State Salem (and a 2010 graduate of Austintown Fitch High School), explained that he works as a traveling nurse, working over the last two years at facilities in Los Angeles, San Francisco and Washington, D.C. On Feb. 17, he began an assignment at a facility outside of Washington, D.C., before COVID-19 was a household term.

“The facility where I worked then was very wary of COVID before it hit the news,” Koch related. “We had a conference briefing every morning (but) things slowly changed. I got texts from my family outlining how proactive Ohio was about COVID-19, from shutting down non-essential businesses to shutting down schools. Where I was, we were a bit behind their moves.”

Bryte, a 2018 graduate of Kent State Salem (and a 2013 West Branch graduate), is friends with Koch and was ready to begin her first assignment as a traveling nurse at the same facility on March 17.

“She was all packed up, ready to drive to D.C. and then the governor of Virginia (where the facility was located) announced that non-essential surgeries were to be postponed,” Koch said. “So, we were both out of a job. I was offered to stay on board to work in the ER, but we chose to take a ‘crisis assignment’ in New York. We were each offered a six-week contract at the Stony Brook University facility outside of New York City with an ‘ASAP start’ and we jumped on it.”

Bryte explained that she was excited to begin her first assignment as a traveling nurse at the Washington D.C. area hospital and was quite disappointed when that contract was canceled. Prior to this, she worked on a progressive care unit, working three 12-hour shifts.

“I have just over a year’s experience and was ready to dive into traveling because that was my goal since graduation,” Bryte said. “When Tony asked me if I wanted to go to New York for a six-week assignment, I didn’t hesitate to say ‘yes.’ The hardest part was telling my family that I was leaving and that my destination was New York. Next thing I knew, we were signing our contracts and getting on a plane.”

Headed to the front lines

The day after signing their contracts, Koch and Bryte attended orientation at Stony Brook University Hospital-Southampton on Long Island, and the next day, they were on the floor as working nurses. 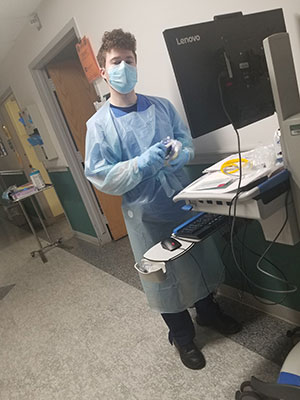 Koch said that they arrived in New York City, needing to “hit the ground running” with up to 30 other traveling nurses from states such as Ohio, Texas, Florida, Oklahoma and Arizona.

Their assignments found them floating between three floors. Two of the floors were COVID-only floors, with patients under investigation to rule out COVID. The other “floor” was a converted hallway for offices in the respiratory and wound care departments but was transformed, under mandates by the state of emergency in New York, so that the hospital could increase its bed count.

“I’ve never been so familiar with the morgue before this,” Koch said. “I remember on the first day I worked, I was required, three to four times throughout the night, to move bodies around the already-filled morgue like a cramped puzzle.”

For the first few weeks of his assignment, Koch worked only on the COVID units. He then requested his final weeks to be on a unit of “clean” patients so he could quarantine himself quickly when he returned home, anticipating the birth of his niece, and wanting to be there when she arrived. (He made it!)

While in New York, Koch and Bryte worked four days a week for up to 52 hours per week.

“I’m usually a day-shift worker and working nights is no walk in the park,” Bryte said. “My sleep schedule was completely out of whack and I tried to get as much sleep as I could between shifts. The struggle was keeping myself healthy while being so sleep-deprived.”

Koch said that working on the COVID units was unlike any other nursing assignment he has had in his career. “It was certainly different,” he said. “Many full-time regular staff were out due to getting COVID and some were hospitalized. It seemed as if every native there knows someone close to them who has passed because of COVID. The patients have been predominantly male. I remember having a young, 50-something-year-old police officer who contracted COVID and he was upset it spread to his wife and children, as well.”

When working on COVID floors, Koch noted that exposure to patients must be limited. He said that most of the rooms are equipped with baby monitors so the staff can observe the patients without entering the rooms as frequently as normal.

Once in a patient room, Koch said that it was quite important to accomplish all of his tasks at once to avoid exposing himself longer than necessary and to conserve personal protective equipment, which was in limited supply for a while.

“Gowning up included an N95 mask that I used all shift – it had to be signed out and cleaned between shifts – a hair cap, face shield, full gown, double gloves and shoe covers. The backs of my ears hurt from the mask use.” 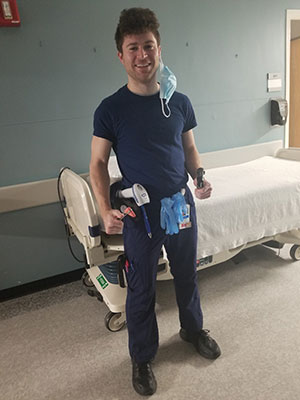 Koch said that he preferred walking to work each day, wearing his scrubs, a mask and a jacket. His attire, apparently, sent a message. “People crossed the street to avoid me daily and I’d be lying if I said it didn’t affect me emotionally,” he shared. “I don’t remember a person walking by me normally, not acting like I had the plague.”

Still, there were others who recognized the hard work of the healthcare workers and helped encourage them to keep going.

“On Fridays, people parked their cars on the street in front of the hospital, held signs with their kids hanging out the sunroofs, honked their horns, thanking us as we began and ended our shifts. Every Friday,” Koch said. “Just because I didn’t ask for a ‘thank you’ doesn’t mean it doesn’t mean the world to me when I get it. Vehicles with sirens drove by at 7 p.m. every Friday, with the sirens on, in support of us. Everyone in the hospital loves to hear it.”

Koch noted that his education at Kent State Salem helped prepare him for this experience in surprising ways. While the classroom, lab and clinical instruction was vital to developing the skills and knowledge to be a great nurse, it was a transcultural nursing class that made an important impact on his approach to patient care.

“I had the opportunity to go on a trip to a Native American reservation in South Dakota (Pine Ridge Reservation) and I was exposed to feeling like a foreigner in an acute setting before I ever had a nursing license,” he shared. “Patients will expose you right away if they know you are not from where they are from, and that is something you have to overcome as a caregiver. I learned to hit the ground running and care of a wide variety of people.”

Bryte agrees. “If not for the professors in the Kent State Salem program and my superiors at my first job, I would not be the nurse I am today,” she said. “I dove right in without a second thought and it’s because of those people that I was able to do so.”

“Make friends. And, like my dad always tells me, the name of the game is ‘get along.’ Your instructors will stress the need to know your skills and subject matter. My advice is to make friends.

“Years later, the memories of learning my skills and subject matter are nothing but an artisan’s clustered bookshelf in my mind,” he continued. “The friends I made and the times we had along the way is what mattered to me. … The work will get done if you focus and have fun landmarks along the way. Don’t let nursing school bog you down. It isn’t something to get through; it is a process to enjoy.

“These memories might not be as useful as a nursing manual, but I like to look back at them with the same enthusiasm I did as a toddler with my first pop-up book.”

Koch’s experience as a nurse in the eye of the COVID storm also affected the way he cares for patients.

“More than ever, I take the soak-it-all-in approach,” he said. “I like to know patients’ stories and learn where they come from, how they feel. Being required to always wear a mask means you must learn to show more emotions through your eyes and through your words with people and patients. A smile is no longer the universal sign of comfort when you have to hide it behind a mask.” 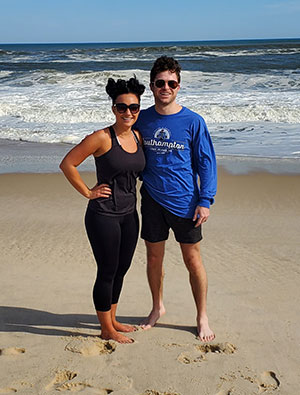 Koch related that, while preparing to graduate from nursing school, Hurricane Harvey had just hit the Houston area and he watched as nurses responded by traveling there to help in that crisis. That sparked a desire to become a traveling nurse, but he knew he needed at least a year’s experience as a working nurse to make that dream come true.

“And here I am with today’s scenario,” he said. “I hope I can look back and see that I tried to make a difference for the right reasons. We like to play scenarios in our minds – like the generic would-I-jump-into-a burning-building-to-save-someone-type scenario – and I like to think this is me proving to myself that I have it in me to do it.

“In the middle of March and early April, we had no idea the extent of the damage this pandemic would cause. Was I afraid I would get COVID? Not really. But I did know it was a possibility and being scared wasn’t useful.”

His final words of caution for those anxious to get back to “normal?”

“If you shouldn’t take financial advice from your broke uncle, why would you take health advice during a pandemic from anyone other than an expert in the field? The new normal doesn’t have to be worse just because it isn’t what you’re used to. Adjust. Adapt. Care more.”

Cutline A: Nurses Brittany Bryte and Tony Koch, both graduates of the Kent State Salem nursing program, worked on COVID floors in a New York City hospital during the pandemic.