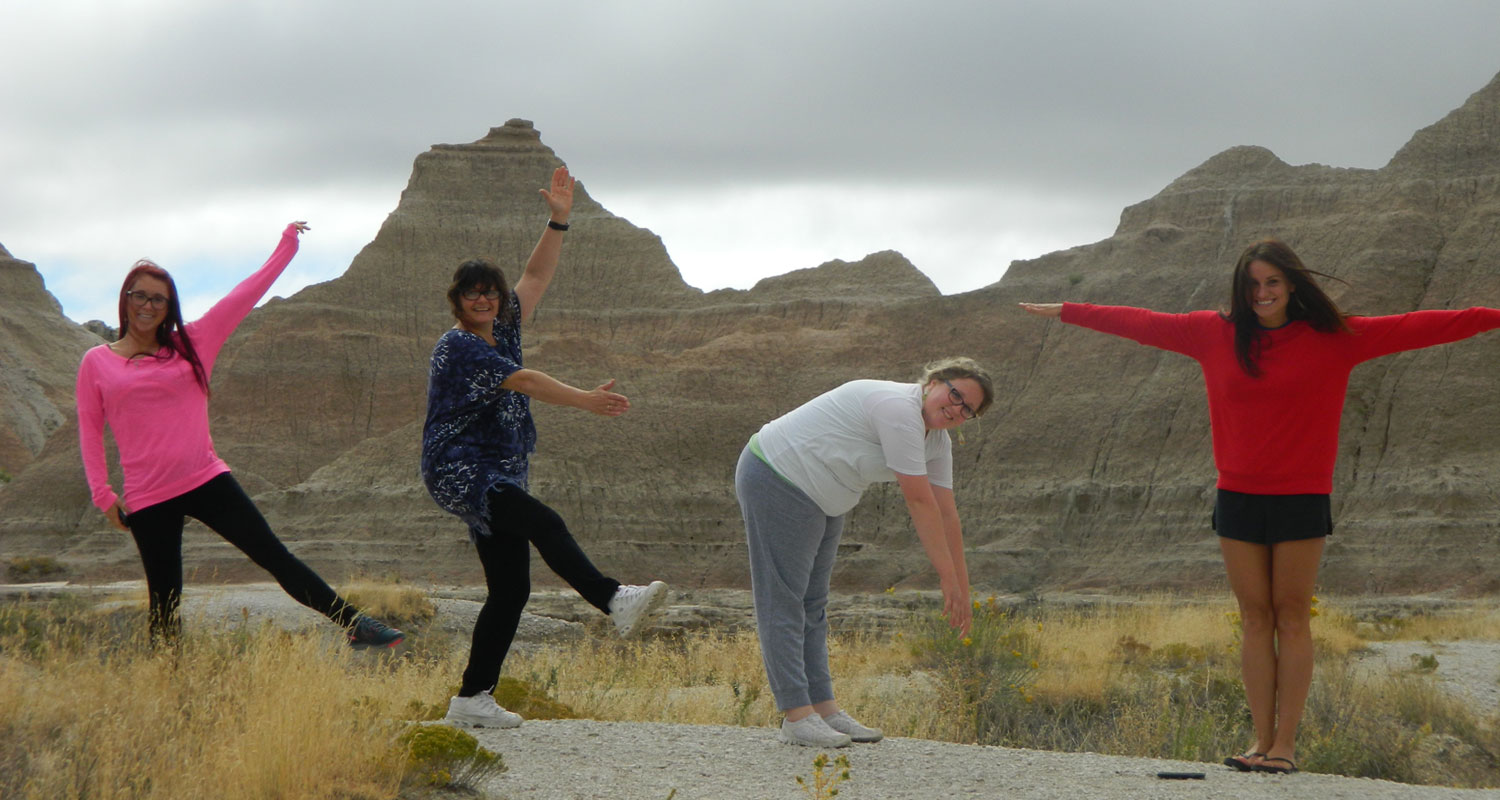 Last semester, four members of the nursing faculty at Kent State Salem, along with 15 nursing students, headed west for leaning opportunities that cannot be taught in a typical classroom.

Healthcare services are available on the reservation, yet they are sparse and many of the Oglala Lakota members are left without access to these services. The average life expectancy there is 48 years for men and 52 years for women.

The nursing students also interacted with children and adults in public venues such as the Wounded Knee Memorial, the local grocery store and at a dinner they hosted for healthcare workers from Indian Health Services. During the dinner, a lengthy discussion took place about health, socioeconomic and psychosocial issues facing those living on the reservation.

Lorene Martin, an associate lecturer in the Kent State Salem BSN program, explained that this was the fourth trip to the reservation by students and staff. “The relationship between Kent State and Pine Ride grows each time we visit the reservation,” she said. “We have secured clinical sites within Indian Health Services at all locations on the reservation and we also have an ongoing dialogue with the Oglala Lakota School of Nursing. One of their graduates is now in our RN to BSN program.”

The trip was offered to students through a transcultural nursing course taught by Dr. Mary Lou Ferranto, BSN program director on the Salem Campus, who has traveled with students to places such as Haiti, Tanzania, Canada, Japan and throughout Europe.

“The purpose of this trip was to engage students with a culture other than their own so that they may begin to gain cultural sensitivity,” Martin explained. “It is of utmost importance that nurses be culturally sensitive and strive towards cultural competence to provide holistic and culturally appropriate care. These trips leave students with a heightened awareness and appreciation of the need for cultural understanding and its application to healthcare.”

The Kent Salem students also attended an historical presentation at the Oglala Lakota College that provided a detailed historical account of the Lakota people’s spiritual beliefs and of events leading up to the Wounded Knee massacre.

The Kent State group hosted a lunch for students in the associate degree nursing program at the Oglala Lakota School of Nursing. Students from both schools met one-on-one to discuss cultural and educational differences between the two settings.

Martin noted that during this most recent trip to the reservation, the Kent State Salem nursing faculty members were able to establish a relationship with the Pine Ridge Dormitory, a facility where school-aged children, in first grade through grade 12, live during the week so that they can attend school. “This is necessary because their parents cannot travel the long distances necessary to get them to school,” she explained, “and this arrangement alleviates some of the financial struggles many parents have for caring for these children. We plan on providing after-school programming for these students on our next trip to Pine Ridge.”

In the weeks prior to the trip, nursing students and faculty collected donations of coats, hats, gloves, boots and scarves that they took to the reservation and gave to children and adults.

It takes a great deal of time to coordinate such a trip and to work out all the details – traveling, lodging, schedules, preparing students, figuring out how to transport the collected items – but all who go report that it is worth every minute.

“This trip changes us, not just as nurses, but as people,” Martin said. “It is an amazing experience. The population of Pine Ridge is steadily growing as members are beginning to return home to, once again, live within their societal values and revitalize their lost cultural norms.”

“This trip exposed me to a side of the human race that I have never seen before,” shared Clayton Poteet, a junior in the BSN program at Kent State Salem.

As he talked about his experiences on the trip to the Pine Ridge Indian Reservation, Poteet was excited, reflective, somber, more excited and even somewhat reverent. It was a trip, he said, that changed his life.

“It is difficult to fully explain how much I learned by being part of this experience and how the people we met changed me,” he said. “When I see that so many people in our own country are living without many of the things we take for granted – fresh fruits and vegetables, safe roads, technology, medicine – it makes me feel lucky. Yet, I feel confused about how we can allow this to happen in the United States.”

Poteet was part of the transcultural nursing class taught by Dr. Ferranto last semester. He explained that the class spent a great deal of time researching the Lakota Oglala Indian Nation and the Pine Ridge Indian Reservation. “Before the trip, we had many meetings regarding the day-to-day agenda of our trip, the kinds of experiences we would be exposed to and the conditions in which this population lived,” Poteet noted. “Still I was shocked by a lot of what we witnessed.”

He and the other nursing students spent time working in the Pine Ridge Hospital and the Kyle Health Center, which he said was fascinating and eye-opening.

Working with community nurses from the reservation, some of the Kent Salem students traveled to the homes of some of the reservation’s residents. “They were able to experience first-hand the types of environments these people live in,” Poteet said. “Poor. Very, very poor. Other students were able to shadow nurses in the E.R., where many of the students broke down in tears after only working half of a shift. These people live under such horrific conditions that it was hard to take it all in.”

Poteet explained that because of poverty, lack of transportation or even beliefs, residents of the reservation often seek medical attention only in dire situations or much too late. “There is little to no preventative care,” he said. “We saw many people with conditions that started as something minor but turned into serious situations simply because they couldn’t get care early on.”

Poteet shared that one of his most vivid memories of the trip occurred while the group was visiting Wounded Knee.

“We met a little girl. Her family lived only a mile away from Wounded Knee, in a small trailer with several other family members,” he started.

“She was 12 years old and told us that she wants to be a nurse when she is older. Her family came over to Wounded Knee when they saw our cars pull up to the memorial. They were selling jewelry to make money for food, shelter and heat. She was wearing a t-shirt, light sweatpants and sandals with no socks.

“Keep in mind: the temperature on that day was around 46 degrees, with drizzling rain and moderate winds. Needless to say, she needed a jacket and proper shoes with socks. She told us that she had gone to the hospital a week earlier because a horse had stepped on her foot.

“She removed her shoe and exposed a large wound that was infected,” he continued. “She needed to be seen by a physician and given antibiotics. That’s easy for us to say, knowing that we would have a hospital nearby if any of us were in that situation. But, that wasn’t such an easy thing for this family. We were able to treat the wound, apply antiseptic cream and re-wrap it in fresh bandages. Hopefully, that little girl did not lose her foot and I hope that, one day, she will be able to become a nurse. She had such a spirit about her and a story inside worth telling. I will never forget her.”

Poteet explained that the group was often placed in very remote situations which helped him better understand just how vulnerable the people are who live in such areas. He explained that, as they traveled from the airport near Rapid City to the reservation, they drove for miles on dirt roads, without seeing any other vehicles, structures or people.

“We were driving on a dirt road for several miles – which felt like a hundred – when we realized that if anything were to go wrong with our cars, we would be stranded,” he said. “We were traveling in new SUV’s, with full tanks of gas, unlike most of the other people who drive that dirt road in old, beat up vehicles. If something were to go wrong, there is no cell phone reception, no gas stations or restaurants and the nearest hospital was over 50 miles away.

“You start to realize while driving down that dirt road how fortunate some of us are and, by contrast, how unfortunate others are.”

Poteet said he encourages other students to consider taking advantage of opportunities to learn outside of the classroom or local clinical setting.

“On this trip, I was able to go outside of my comfort zone and learn about a population that I knew nothing about,” he said. “Many professional nursing associations stress the importance of cultural competence in nursing practice and this trip helped us begin our journey toward cultural competency. This trip changed me and my approach to caring for my patients, and I know it changed the others who were with me. We will be better nurses because of this experience.”