Kent State University at Salem was well-represented earlier this month at the Ohio Society of Radiologic Technologists annual education seminar by students who competed, as well as by faculty and staff members who helped organize the event. Twenty students participated in the competitions, all graduating in May from the associate of applied science degree program in radiologic technology.

The annual meeting showcases the latest in technology and educational advances and several members of the Kent State Salem staff participated in this year’s event. Jan Gibson, senior director of the radiologic technology program, and Shellie Warino, clinical coordinator for radiation therapy, served as committee chairs, while Judy Miller, clinical coordinator for radiologic technology, was a member of the seminar planning committee. 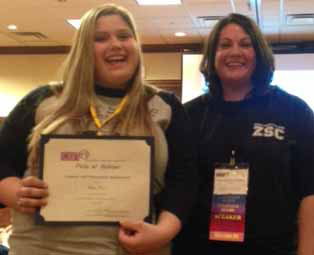 The event included the Roy Bell Memorial Educational Luncheon, named for the late Roy Bell, who, along with his wife Shirlee, began the hospital-based radiology program at the Kent State Salem Campus in 1985, working closely with what was then known as Salem Community Hospital. Presenters during the luncheon included Kelly Dragomir, lecturer, and Margie Iagulli, senior lecturer.

Lauren Huffman-Thompson, the inaugural radiologic and science imaging graduate of the computed technology (CT) program at Kent State Salem in 2003, was honored as the incoming president of the OSRT.

Photo B: Amber Biser (left) scored higher than nearly 300 other students taking the assessment exam at the Ohio Society of Radiologic Technologists seminar and was a member of the Quiz Bowl team. She is with Lauren Thompson-Huffman (right), the inaugural radiologic and science imaging graduate of the CT program at Kent State Salem in 2003 and 2016-17 president of OSRT.