Kent State University at Salem was well-represented earlier this month at the Ohio Society of Radiologic Technologists annual education seminar by students who competed, as well as by faculty and staff members who participated and helped organize the event.

The students graduate in May, each with an associate of applied science degree in radiologic technology.

Student Heather Kennedy placed first in the Philip Ballinger Student Assessment exam, recording the best score of 150 students who completed the exam. This is the fourth time in six years that a Kent State Salem student won this award.

Presenting the only two posters submitted at the meeting were Kennedy and Abbey Sheronovich, with “Automated Breast Ultrasound System;” while Katelin Knapp and Jen Lawrence presented “X-ray Phase Contrast Imaging.” 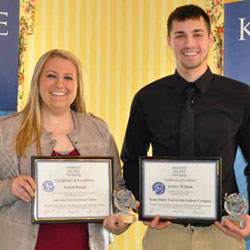 The annual meeting showcases the latest in technology and educational advances and several members of the Kent State Salem staff participated in this year’s event. Jan Gibson, program director of the radiologic technology program at Kent State Salem, along with Margie Iagulli, senior lecturer, authored and administered the Philip W. Ballinger Self-Assessment Exam to 150 students from 15 Ohio radiologic technology programs.

Judy Miller, the clinical coordinator for the radiologic technology program, was installed on the board of directors of the OSRT.