Dominic Spiker and Grace Beltran are students on the Kent State Salem Campus and part of the newly-organized eSports team. They love computer gaming, computer technology and each other.

Dominic and Grace are husband and wife.

Their love story began six years ago, through an online video game called Perfect World International. Dominic was in Salem. Grace was in Mexico City, Mexico.

While the love between them was natural, it was the eSports team that drew them to the Salem Campus. Their love for one another and their love of video gaming led them to become Kent State Salem students.

This is their story:

Dominic: I was born in Alliance and lived there for a small portion of my life, but ended up moving to Salem for most of my life. I lived in Leetonia for a few years, then Lisbon for the last bit of my school life, then back to Salem where I’ve lived ever since.

Grace: I was born and raised in Mexico City. I moved to the United States two years ago. That was my first time ever leaving Mexico. The experience has been a rollercoaster ride ever since.

Dominic: Grace and I met on a private server, which is a private owned version of a game. The game is Perfect World International. Think of it as a Chinese-esque version of World of Warcraft. You have healers, damage dealers and tanks. Really a team-oriented game.

Grace: The video game has a chat feature and a wedding system. We talked through this video game for hours upon hours. We even had a video game wedding, in which his real-life cousin was part of. After the video game, we continued talking through other means like Facebook, Skype or by cell phone. It was difficult, since I was still learning English at the time. We continued a long-distance relationship for over two years, then we decided it was time to move on and meet in person. 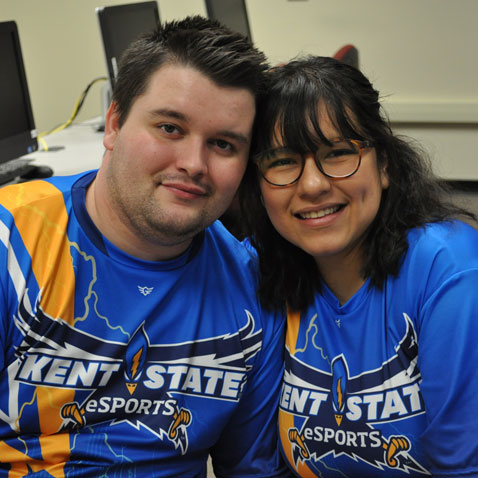 Grace: He is my best friend. He makes me happy and laugh so much. He also is handsome, smart and very humble. We also happen to share the same passion for video games, music and traveling. He has proved that he will always be there for me, regardless of the situation.

When we decided to be together, we had to go through a lot. I had to go through interviews, medical checkups and gather documentation constantly – just to be able to travel here. Although, when I made this decision and it got me closer to him, it, sadly, got me away from my family. This, sometimes, is very difficult for me because I am a family person and I miss them greatly. But, even my family understands how much I love him and they love him, too. He has become part of my family and I have become part of his.

Sometimes, love means sacrifice and you have to be with the right person in order to endure all difficulties life gives you.

Dominic: I told her when we first began talking that I had a history of girls dumping me and that I was not really looking for a relationship. I wanted to push through school at the time. She and I talked and played games together; I helped her through some quests on the game. She played dumb with me and asked what I looked like.

I told her that I had “snakebites” (piercings) and she said she had no idea what those were. So she found her way into my Facebook page and, from there, we had constant contact.    I decided to ask her if she wanted to date. It started with us getting married in the game. As things got deeper, I told her, flat out, that if we were going to be together, I wanted to date her to marry her, not date and move on. I didn’t want another relationship that would just end in heartache. I used that to find out if she was really going to stick by me. Well, from what I see, she stuck with me!

It was the best thing that ever happened to me. Every day we spent talking with each other, sharing stories of our lives; where we came from; what our hopes and dreams are. Everything just came together to make a beautiful picture. The hobbies and interests she had flowed with mine so nicely. We played the same games, enjoyed the same music. Every day we shared more and more, realizing that, even though we were worlds apart, the things we enjoy are no different. We had slight cultural differences, but they were awesome to share and we both fell in love with each other’s life. Meeting was a must.

Grace: We met for the first time at the airport (in Mexico City). At that time, we really had no idea how it was going to end up. While I was waiting for him, I began to wonder what was taking so long. I called my mom and she assured me that the waiting time is normal, due to security checks. I kept waiting, but as time went by, the gate where I was waiting became empty.

I decided to ask for help and, sure enough, the police officer told me that I was standing in the wrong gate – after 40 minutes of waiting. As I began, literally, jogging to the designated gate, I grabbed my phone and started to message Dom. Sadly, he was unable to receive any of these messages because he lost all cell service. I kept walking, staring at my phone screen. Suddenly, I had someone standing in front of me, whom I ignored because I was waiting for a text from him.

I landed on a Sunday night. I exited the security doors and began looking around for her. She had been accidently sent to the wrong terminal to wait, so I grabbed my bags and started heading to someone to guide me. I began walking down the hall and I noticed her walking toward me.

I began smiling and expecting her to see me, but she was so nervous and scared and was looking all around, not noticing me in front of her. As we got closer, I began calling her name. It took two or three times before she snapped out of it and the moment we locked eyes, she lit up like a Christmas tree!

She instantly wrapped her arms around me and we hugged for, what felt like, forever.

Grace: My first reaction was to hug him. I was incapable of talking at the time because I was nervous. Instead, we kissed for the very first time!

My brother and best friend were outside waiting for us, so we had to rush and we held hands. We began to talk more during the car ride, but it was mostly staring and giggles.

We gave him a tour around the city before we went home where he was going to meet my mom and dad. It was a very special night for both of us. I couldn’t believe he was there!

Dominic: I had only planned to stay one week, which was a huge mistake because, once I got down there, everything blew me away. The atmosphere was intoxicating! I always wanted to see a huge city – something about the tall buildings, everyone out and about, nothing is quiet, everything going on. It was like a blast to all of my senses.

Grace: We got married on June 14, 2016. It was a bittersweet moment for me, since my family couldn’t be there. We did a live video and recorded it so that they could see it later. We would love to renew our vows and get married again the traditional way.

Dominic: It was a very happy day. We didn’t have a full-on wedding, but that is coming later in life when we become more stable and have the means to do it. … The dream plan is renewing our vows here in the United States for my family and, possibly her immediate family, if we can. Then, we want to do the same thing in Mexico for her family. One of the main things we stress is equality between each other. We have to make sure that neither of us feels like the other is getting better treatment; it’s hard enough being so far from your family.

Dominic: I always had a passion for games and computers. When Grace got here in the United States, she told me I had to get my GED and think about college. Before, I felt like life here is just going to force me to work in a factory like the people I went to school with, so I kind of lost my passion and figured that was going to be my life, too. But, Grace changed that and got me interested in college. I wanted to be part of Overwatch (a video game) by creating a character and programming that character.

…After I got my GED, I started looking at colleges, but I wanted to go to college the same time Grace did so that we can do things together. Once she was approved for college, we looked at colleges that fit our interests in other states and in Ohio. One day, I saw that Overwatch was offering scholarships and found out that Kent State was part of that opportunity. I flipped out and began my search for programs Kent offered.

I didn’t think a college from my area would even be interested in something I was interested in. Once I saw Kent had the path Grace and I wanted, we were on a mission to be part of Kent. After meeting Dr. (Steve) Toepfer (assistant professor of sociology and advisor to the eSports team), I knew I was where I belong. He has such an exciting attitude and makes me really enjoy being part of the eSports team.

Grace: We love every aspect of a video game and our dream is to create them. We wanted to learn how to do it, so we decided to try to get into college for this. When we explained our situation to the advisors at Kent State, they mentioned an eSports team and that it happens to play Overwatch, a game we’ve been playing for over a year. We love the experience of playing competitively and now we have created a new family with our team players.

Grace: I say that eSports involves more than skill. Having passion for gaming, being a team player, being dedicated and capable of communicating with your team are great qualities. If you have any of these and are a healthy competitor, don’t give up and come challenge yourself to become the best you can be.

Dominic: I grew up as an only child. I didn’t really care for football or soccer. I didn’t enjoy track. I felt out of place in my childhood; I felt like I was weird because everyone loved football. I felt most myself when I was shooting Covenant in Halo or collecting every gem in Spyro. I never had any kind of activity in my school that gave me a purpose like football did for my school. Football was the pride and joy.

Now, there is a sport for me that is based off my passion and my love of games. You can now be on a team for your school, playing against another school in the virtual world of that game. This is a dream come true.