The Seasoned Café Opens on the Salem Campus

A ribbon-cutting ceremony was held to mark the official opening of the Seasoned Cafe on the Salem Campus. Representatives from Kent State and Aramark planned a full morning of activities that included free samples, goodie bags, games, music and raffles. 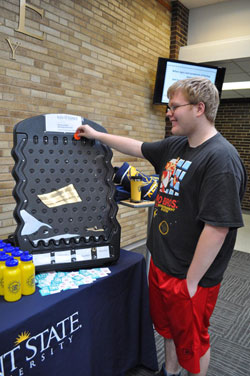 In his remarks to students and staff, Dean David Dees noted that the opening of the café was the result of a promise made – and kept – by Kent State President Beverly Warren to have food on the Salem Campus. 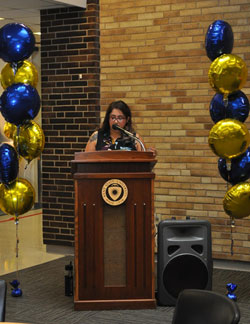 “When President Warren was fist hired in 2014, she embarked on what was called a ‘Listening Tour,’ during which she visited all of the campuses and met with students, faculty and staff. She heard them express their wants and needs for each campus and, while at the Salem Campus, she heard over and over a desire to have food here,” Dees related. “Well, she not only heard, but she listened. And she pushed hard to get food on our campus. This café also is part of her bigger plan to make Kent State University the healthiest campus in the United States and that is why we have healthy food options at the Seasoned Café.”

The new cafe is open 9 a.m. to 3:30 p.m. each Monday through Thursday, offering fresh food options for breakfast and lunch that include sandwiches, salads, beverages and daily specials.

Speaking on behalf of the Kent State Salem students, Sylvia Hernandez thanked Kent State officials for making the café possible and she encouraged all students to take advantage of this service. “Now, we don’t have to leave campus to get something to eat between classes,” she said. “It makes it much better to be able to stay here rather than go off campus for food and then be tempted to not come back for your next class. This café makes it feel like a real campus. Thank you, Kent State.”

Hernandez is a pre-nursing student and vice president of the Student Government Organization on the Salem Campus.