Keynote speaker M’Baye examined current problems created by global warming for former or current colonial countries of developed nations through rising sea levels in Senegal in his talk “Theorizing Environmental Injustice through the Prisms of Racism and Colonialism.” M’Baye pointed out that “developed” nations have a responsibility to support and to help protect former colonial possessions around the world as the consequences of climate change become increasingly harmful to the people and the economies of these countries.

St.-Louis, Senegal, a city located on a northern archipelago in the mouth of the Senegal River, and often referred to as “the Venice of Africa,” is considered by the United Nations the African city most at risk for flooding, often occurring 10 months out of the year. The U.N. attributes the flooding not only to rising sea levels, but increasingly heavy rain, the result of climate change.

As a former French possession, Senegal was not permitted to develop industry. Natural resources were sent to France for manufacture and then shipped back to Senegal for sale, impoverishing the nation and its people who do not have the resources to deal with increased flooding because of climate change. M’Baye noted that, because of their role in exploitation of resources of countries around the world, current and former colonial powers must be part of the solution of these problems in former colonies.

The Paris Climate Accord, with all but two nations represented at the time of the conference, is a start to solving the problems of nations like Senegal whose resources were put to use by colonial powers, rather than for the benefit of the population of the countries themselves, resulting in the current status of those countries as unable to combat the effects of climate change due to the impoverishment caused by colonialism.

As M’Baye pointed out, former colonial countries around the world do not have the resources to combat flooding, drought and other results of climate change; they must rely on world-wide agreements to assist with the economic problems faced as post-colonial countries with these world-wide problems.

Physicist Levensen spoke to problems of climate shift, including drought and rain cycles worldwide, as well as to the shift of ocean currents and winds that are creating problems with food production. Using physics to demonstrate current and future problems with flooding and drought cycles, Levenson pointed out the increasing problems of famine and agriculture in his talk “Global Warming and Crop Failure.”

Levenson also drew conclusions and predictions from the coast and from drought-ridden areas of Africa, explaining the effects of global warming on drought cycles and flooding that lead to crop failure and subsequent famine and starvation due to the greenhouse effect. 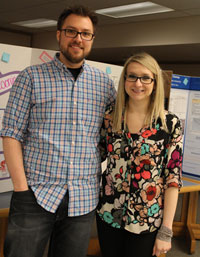 The conference’s final speaker, graduating senior Kyle Barron, read from his honors thesis, Rogue Wave, a collection of poetry concerned with the  environment. Barron’s poetry examines the current quality of the environment from concerns about air and other environmental pollution, and the relative lack  of concern of “big money” about environmental concerns, to celebrating the earth in poems that look at childhood experiences like blackberry picking;  camping in the wild; photo rather than killing safaris in Africa; and human and nature interactions like that of his wife, also a poet, reading her poetry aloud to birdsong at the Cuyahoga Valley National Park.

Student papers, roundtables and poster displays rounded out the conference. Trees, as in every other year since the conference’s inception in 2006, were supplied to attendees, allowing them to take action, one at a time, by  planting the trees to combat the harmful effects of CO2 to the environment.

Organizers for this year’s conference were Dr. Lydia Rose, sociology professor, and Megan Rodgers, who works with the campus biological sciences department.