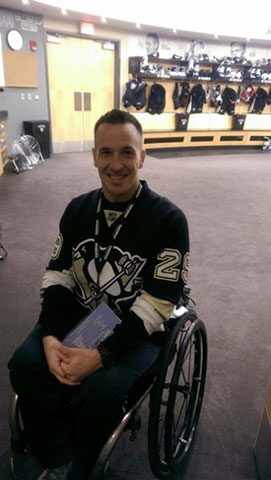 Kent State University at East Liverpool welcomes the public to hear the story of Terry Dear, a local man whose life was changed dramatically following an accident that left him partially paralyzed. He will speak Tues., Feb. 19, beginning at 4:30 p.m. in the Library in Purinton Hall.

Students in the physical therapist assistant program are hosting the event and invited Dear to campus to share his experiences as a soldier, athlete and student, and how he has adapted to life following his injury. Admission is free, but there will be a basket raffle and light refreshments.

In 2012, Dear received a gunshot wound during a domestic dispute, leaving him partially paralyzed. He left the Army in 2014 and, later that year, began playing sled hockey for the Pittsburgh Mighty Penguins. He has competed all across the United States and Canada.

Dear lives in Toronto and is a student at Kent State University, studying computer technology and computer forensics.