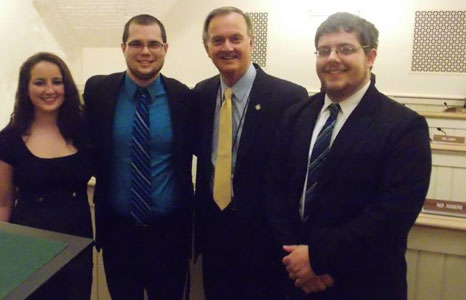 This past spring, while baseball teams all across the country were preparing for their upcoming seasons, a group of students from Kent State University at Salem were preparing to testify before the Ohio House of Representatives, urging them to declare Oct. 7 as “Moses Fleetwood Walker Day” in honor of the Ohioan who was the first African American major league baseball player under contract.

Students Robert McBride and Ryan Benner were part of an American politics class taught by Craig Brown, adjunct lecturer on the Salem Campus, who organized and coordinated efforts to designate a state day to honor Fleetwood Walker.

They, along with Cassie Jackson, testified this past March in Columbus before the State and Local Government Committee of the Ohio House of Representatives seeking support of House Bill 436 which would create a day of recognition for Fleetwood Walker.

Following the students’ testimony, the bill was unanimously voted out of the committee. “We now have to convince Speaker of the House William Batchelder to allow it to go to a floor vote,” Brown explained. “It’s a long process, but we’re determined. This is our first big hurdle.”

HB 436 is sponsored by Rep. Stephen D. Slesnick (D) who stated that Fleet Walker himself likely did not realize the significance of his role as catcher for the Toledo Blue Stockings in 1884. “While Jackie Robinson often receives credit for breaking the color barrier in major league baseball, it is important to note that Fleet Walker took the field more than 50 years before Robinson’s debut,” Slesnick wrote. “In fact, the uproar and controversy over Fleet Walker playing alongside white players led to the professional ban of black athletes.” 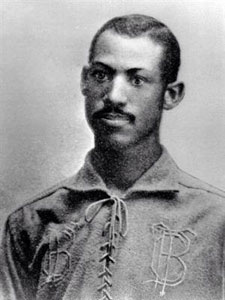 Moses Fleetwood “Fleet” Walker was born in Mount Pleasant, Ohio, on October 7, 1856. He played catcher for the Toledo Blue Stockings in 1884, and also played for the St. Louis Browns, Philadelphia Athletics, Baltimore Orioles, Cincinnati Reds and the Louisville Colonels. Interestingly, Curt Welch, from East Liverpool, was an outfielder with Fleetwood Walker on the Blue Stockings team.

According to the students’ research and testimony, Fleet Walker was known for catching bare-handed, which led to an injury and an early removal from his Major League contract. “Fleet was an excellent catcher and performed well while he was at bat,” Benner testified.

“However, throughout much of his career, people were unable to overlook color for skill. He was refused service at the St. Cloud Hotel while staying in Kentucky for a series against the Eclipse Club. Before the series began, the Eclipse Club’s managers refused to play against Fleet’s team unless they replaced Fleet with a different catcher for the series. While playing for the Blue Stockings, Fleet was once again ousted from catcher, due to complaints from the opposing team. This time, however, he was placed in the outfield.”

Benner stated that Fleet was a man whose actions of courage and determination were not celebrated and, instead, he was cast aside. “For this reason, I believe that we should recognize Walker and finally give him the credit he deserved for being the first African American to play baseball professionally,” he said.

In his testimony, McBride noted that Fleetwood Walker was a controversial figure during his short-lived baseball career, but that “his prowess was unmatched.”

“The attention surrounding him was a sense of admiration, though this was contorted into jealousy and racial injustice,” McBride said. “His participation in a team setting was enough proof that the whole was greater than the sum of its parts, even during a time of racial turmoil It is not enough to simply concede recognition, especially to a man who rightfully earned it by catching the baseball bare-handed.

“The uneasy bond he shared with his teammates was a precursor to what Jackie Robinson would do 62 years later,” McBride continued. “…This honorary day would bring to light the birthday of a man who was oppressed by his environment, along with his resolve to challenge it when no one else would. A posthumous award is better than none at all.”

Brown and his students created a Facebook page that contains additional information about Fleetwood Walker, along with photos and information on how to support this effort. It can be found at https://www.facebook.com/mosesfleetwoodwalkerday.

The Steubenville City Council voiced its support of House Bill 436 with a letter asking Ohio lawmakers to vote in favor of the bill. “We, as a government body, feel that this is the least he deserves,” council stated.

The letter states that “Moses Fleetwood Walker, if history had been written correctly, would have been recognized as the first African American to play in Major League Baseball. While the clear majority has been living under a false pretense for years that Jackie Robinson integrated baseball in 1947, Moses Fleetwood Walker actually did that 63 years earlier.

“This letter is in no way intending to discredit Jackie Robinson, but to recognize Mr. Walker for his accomplishments, He will never be recognized by the Major League Baseball, but what he went through and what his success meant for players like Jackie Robinson can never be replicated or overstated.”

The letter continues: “On May 1, 1884, Moses Fleetwood Walker took the field against the Louisville Eclipse and in doing so, officially broke the color barrier of Major League Baseball. Jackie Robinson certainly displayed courage on April 15, 1947, but lost in history is a man who overcame the ugly divide of the post-Civil War era to help integrate a sport now known as the ‘American pastime.’”