Nurses on a Mission to Haiti

To most students, spring break means just that: a break from classes, lessons and campus. For a group of Kent State University nursing students, however, their most recent spring break was an intense learning experience that took them to remote villages in Haiti for a medical mission trip. Among those who made the trip were Dr. Mary Lou Ferranto, director of the BSN program at Kent State Salem, and two of her students: Sheila Daniels and Mathew Duck. 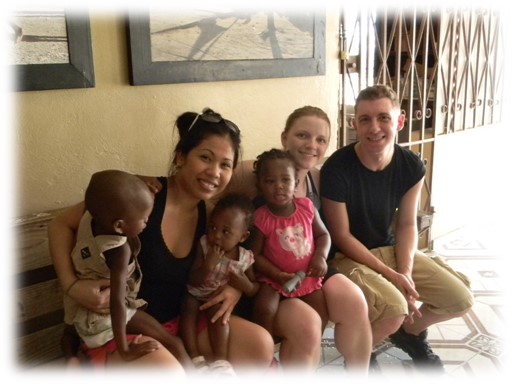 According to Ferranto, interested nursing students from all Kent campuses had to apply to be part of this trip and a small group was selected. “I was so proud of Sheila and Mathew for being chosen and I was honored that they wanted to be part of this project,” she said. “They have the clinical skills and the compassionate hearts that are needed for a mission such as this.”

The trip was arranged through People for Haiti, an organization to help provide services to those in remote areas of the country who are still feeling the effects of the devastating earthquake that hit a few years ago. In just three days, the group from Kent State saw 1,005 patients.

The group’s first day was spent at the Cabaret Baptist Children’s Home in La Belle Frecher Village where they treated 461 patients.

The orphanage housed about 50 children who interacted frequently with the nursing students, since that is where the mission group stayed. “These kids were so happy to see us and had so much love to give,” Duck said.

“The children living at the orphanage were so joyful and loving,” Daniels added.

On day two, the group traveled to Terre Noire Village in the mountains where they saw 303 patients, including a very sick infant. 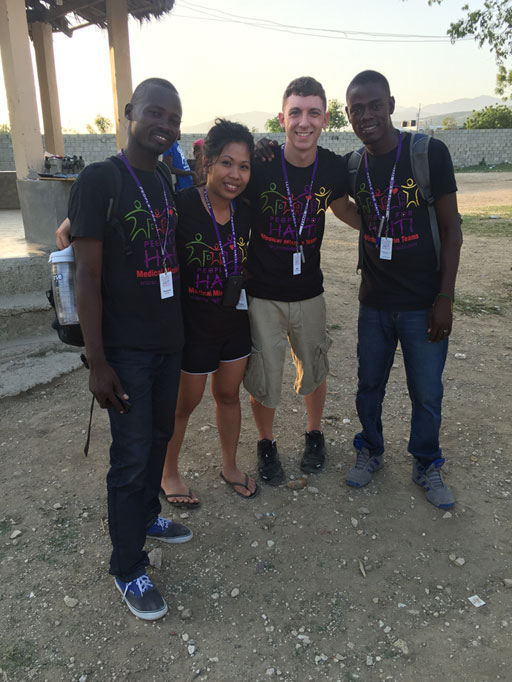 “After we wrapped up our day and were sitting down for dinner, a woman brought us her very sick three-month-old baby who had been one month premature,” Daniels related. “Weighing only six pounds, the baby had a very high temperature, a very fast and irregular heartbeat, and was in severe respiratory distress. Our team dropped everything, raced in different directions to gather supplies and quickly treated this baby. Each member was deeply affected emotionally.”

Daniels explained that the baby received several breathing treatments and a shot of antibiotics before being rushed off to find a hospital. The first two hospitals they visited were closed and the third had no available beds. The fourth hospital accepted the baby and took over his care. “No one gave up on this baby,” she said.

The group spent the third day of the trip back at the Cabaret Baptist Children’s Home where they treated another 241 people from the local villages. Ferranto and Tezie also held a teaching session with students from a Haitian nursing school reviewing the assessment skills of the nurses there and teaching them techniques for treating adults and pediatric patients.

“Dr. Ferranto may have been out of the classroom in Ohio, but she is in her element in Haiti,” Daniels said.

Ferranto, also a family nurse practitioner, has taken other medical mission trips to Haiti – as well as to other parts of the world – so she had some idea of what to expect once they arrived. She and Tezie were in Haiti last November, so they met with the Kent State students several times before this most recent trip to explain what they may encounter.

“We had an idea of the amount of people we’d treat and the hot conditions, and we were told that the only drinking water was the purified water at the orphanage where we would stay,” Daniels said. “They also informed us that we would need a mosquito net.”

Prior to leaving on the trip, the students researched topics such as diseases they may encounter in Haiti, cultural differences, religion, family dynamics, language barriers and living conditions.

“I did some research about the country and the people and I did have some reservations about going,” Duck shared. “Before the trip, I was nervous. I had never flown before so this would be my first time flying and it was definitely nerve-wracking. But then I looked at the good that I might be able to do and that was all the reason I needed to go. If I was able to help just one person while there, then I made a difference.”

Daniels related that they worked with translators to communicate with the Haitians, which helped greatly. “I expected our team to treat lots of patients, but I didn’t expect us to see over 1,000 patients,” she said. “This was only possible through the teamwork and hard work given by each of us. Each clinic was so organized. Some of us were assigned in triage, a couple students worked alongside Dr. Ferranto and Dr. Tezie as they treated patients, and the rest worked in pharmacy. 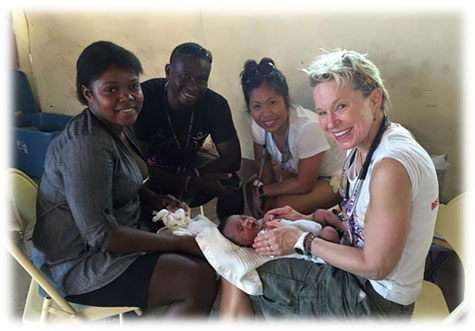 “I was thankful to see our instructors and nurse practitioners at work,” Daniels continued. “They were so knowledgeable, compassionate and personable with each interaction.”

She explained that People for Haiti provided about $10,000 worth of supplies and medications for the trip that included antibiotics, inhalers, eye drops, blood pressure medications and even eye glasses. “Still, these medications weren’t enough,” Daniels said. “Kent State nursing faculty and students, along with People for Haiti, provided the best care we could with the resources we had.”

Duck said they saw and/or treated people of all ages. Some came to them with aches and pains, while others came with very serious conditions. “Some would stand in 98-degree weather for six hours to only get an antacid, Tylenol or vitamins – and they couldn’t have been more pleased,” he said. “It really puts things into perspective.”

Daniels agreed. “Every person we saw was so patient,” she said. “They waited in the heat, dressed in their best clothing, with the biggest smiles on their faces. People from all over would walk the distance to be seen. After seeing the providers for just a short amount of time, because of the amount of people waiting to be seen, they were still so thankful and appreciative.”

At one location, a mother arrived with her son, knowing something was wrong with him, but had never been told what made him “different.”

“After a developmental assessment, we determined that this 5-year-old boy was only 18-months developmentally,” Duck related. “We also determined the boy has cerebral palsy. His mother was unaware of this, but was somewhat relieved to have it explained to her. Education is something that desperately is needed in the country.” 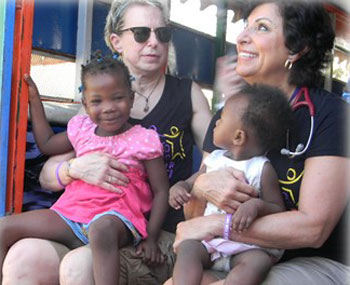 Both students shared that this trip not only taught them more about themselves, but also about how they will approach their future careers in nursing.

Daniels is from Canton and graduates in August with her BSN degree from Kent State Salem. She currently works at Mercy Hospital and hopes to eventually work in the intensive care unit, while also furthering her education. She is married and has a 3-year-old daughter.

“This trip not only changed my life, but motivated me to know that I can make a difference back home. I learned the true meaning and importance of compassion and empathy,” Daniels said. “Whether I’m in Haiti, or holding a patient’s hand here in the hospital, I realized I don’t want to lose those qualities as I start employment in the near future. I also value and appreciate the healthcare system that we have in the United States.

“I didn’t realize how much we can do for sick patients until we were seeing patients in Haiti with conditions, such as cancer and diabetes, and we couldn’t do anything but give them vitamins,” she continued. “This concept was tough to take in and process because, in nursing, I am used to seeing patients be given a chance to improve their quality of live. In Haiti, that almost seemed impossible.”

Duck is from Wellsville and graduated from Kent State Salem with his BSN in May. He hopes to work in critical care, while also continuing his education eventually becoming a nurse practitioner.

“This experience definitely changed my way of nursing,” he said. “It helped me improve my critical thinking skills because there wasn’t any technology in Haiti. The only tools we had were the knowledge and judgment we learned along the way. My level of compassion has increased, along with my patience.

“I would definitely do another medical mission trip like this. I fell in love with Haiti and want to go back as many times as I can,” Duck continued. “All of us left Haiti changed in a way that is hard to put into words.”

Picture A: Kent State nursing students Sheila Daniels and Mathew Duck with some of their young patients in Haiti.

Picture B: Sheila and Mathew with their translators.

Picture C: Dr. Connie Tezie (far right) examines a baby brought to her by his mother, while Shiela Daniels (back) and her translator observe.

Picture D: Dr. Connie Tezie (left) and Dr. Mary Lou Ferranto with some of “their” babies.