The third Kent State Columbiana County Volleyball Classic took place Aug. 24, when the Salem Quakers hosted the East Liverpool Potters for a full night of volleyball action and helping kick off the volleyball season in this area.

The night featured freshman, JV and varsity games between the cross-county rivals, In a hard-fought varsity match, East Liverpool High School defeated Salem High School for the second year in a row. 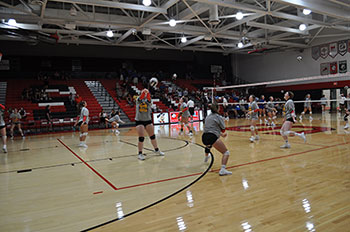 As hosts for the evening, Kent State Columbiana County provided t-shirts for the players and coaches and fed the teams following the games. Flash was on hand to cheer, as well.

Cutline A: The East Liverpool Potters won the 2021 Volleyball Classic.

Cutline B: Flash was there for both schools.