Kent State University at East Liverpool recently welcomed Franklin County Commissioner Paula Brooks to campus. Brooks began her academic career at the Kent State East Liverpool Campus and was appointed to President Obama’s White House Task Force on Climate Preparedness and Resilience in 2013. During her visit to the East Liverpool campus, Brooks listened as community members, faculty, staff, administration and students voiced their ideas on how the government can better prepare our communities for the impacts of climate change.

Brooks is one of 26 members on the task force, comprised of governors, mayors, county officials and representatives of tribal governments. She is Ohio’s only representative on the committee and leads the energy sector of the task force.  The task force is gathering recommendations to help communities better prepare for the impacts of climate change. Brooks shared a number of the committee’s concerns, including a 38% rise in precipitation which is causing significant property loss and water run off with various chemicals and the possibility of a 5 to 10 degree Fahrenheit rise in temperatures within the next 20 years.

National, state and local leaders across the United States are already contending with more frequent or severe heat waves, droughts, wildfires, storms and floods, and other impacts associated with climate change. The Task Force will provide recommendations to the President to better support local efforts, and develop the information and tools communities need to prepare. 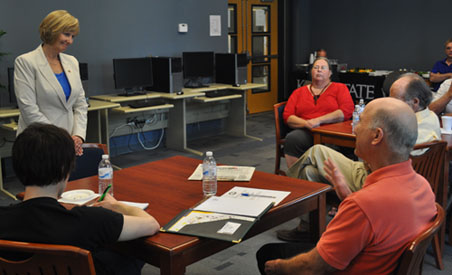