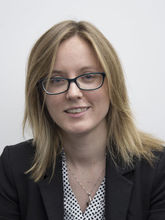 COMM Assistant Professor Cristin A. Compton, Ph.D., co-authored “Organizing Sexuality: Silencing and the Push-Pull Process of Co-Sexuality in the Workplace” in the Journal of Communication Vol. 67, Issue 6, 2017, 874-896.

The article was co-authored by Debbie S. Dougherty from the University of Missouri.

“This project emerged from my dissertation. I described to Debbie how frustrated people are with LGBTQ+. Everybody that I’ve talked to is frustrated with these important yet quickly shifting categories; we’ve got a giant spectrum of terms and it’s causing confusion in the real world. I wanted to have a way to talk about sexuality on a larger scale, based in theory,” Compton said.

According to the abstract, the article conveys the growing social legitimization for sexual minority relationships and a more fluid social understanding of how sexual identities have shifted how we bound “normal” sexuality. The paper introduces the concept of co-sexuality, the push-and-pull process of communicatively organizing around sexuality. The concept was used as a grounded theory approach to explore how employees of various sexualities and in different occupations understand “normal” sexuality and subsequently organize around it.

“My purpose was that I was tired of this heterosexual, other, binary, etc. labels so as I started talking to people across all sorts of sexual identities, I realized there’s a process going on. There’s a pushing-and-pulling around what we call ‘normal.’ And what we consider ‘normal’ changes contextually,” Compton said. “In queer-centered spaces, being heterosexual is abnormal. So how you communicatively position yourself and others will be similar but not the same process. I want to know what resources people are drawing on to communicate our identities. How are we saying or doing things a certain way to convey our identities? And so I took the research into the Midwestern workplace, where this process can have serious impacts for people.”