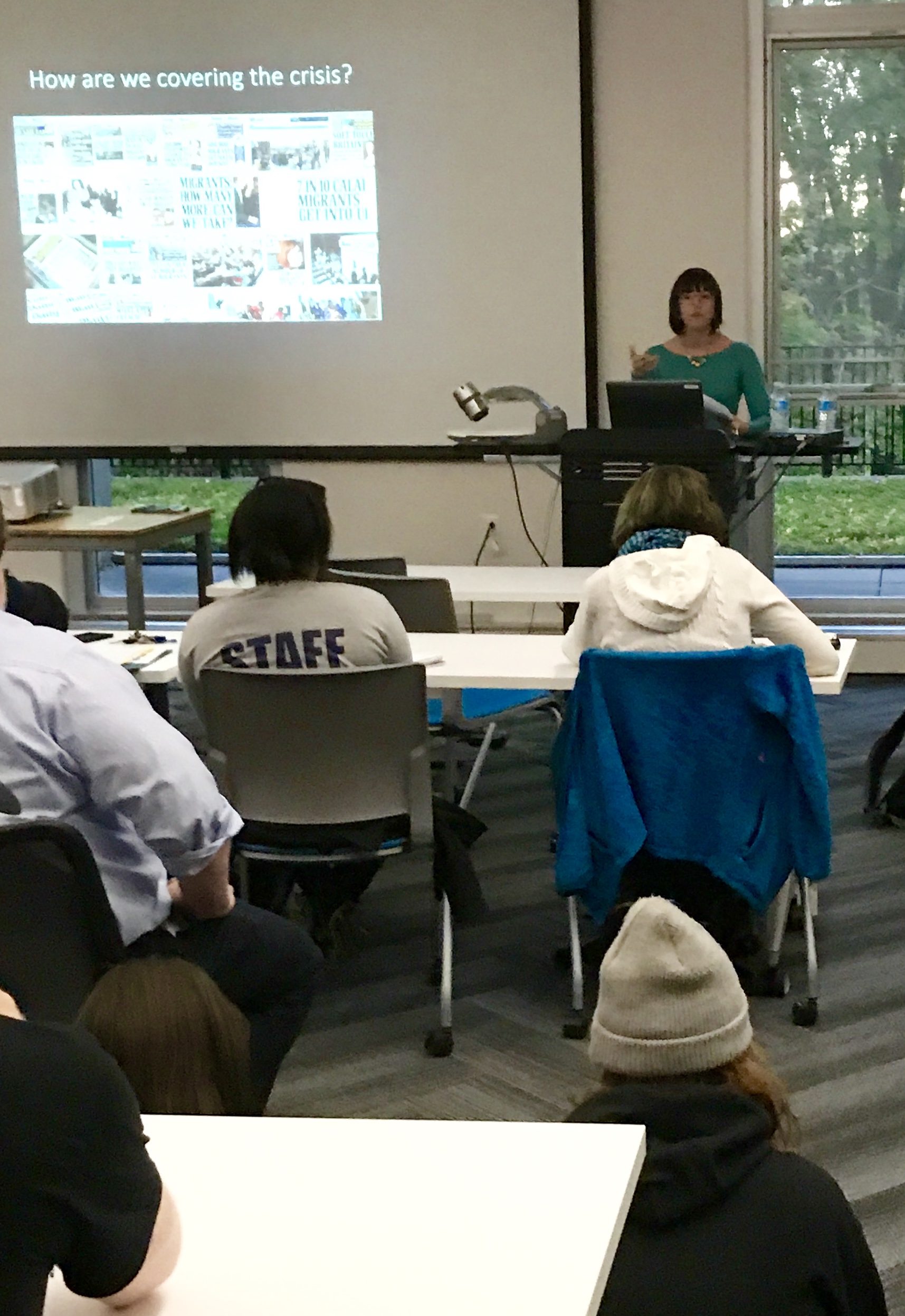 Nearly 150 attendees packed into Rm. 226 in Taylor Hall to hear international journalist Malia Politzer talk about her reporting of the refugee crisis in Niger, Italy, Germany and Turkey. Politzer was the featured speaker for the Kent State University School of Communication Studies fall Global Issues Forum which brings Pulitzer Center on Crisis Reporting reporters to campus who offer personal and professional perspectives on how a news story is covered.

Politzer discussed her yearlong, award-winning investigative project, “Refugee Boom and Bust: A Global Gold Rush,” which described how “CEOs, criminals and small-time vultures are making a killing off the refugee crisis.” This free forum highlighted Politzer's work for Huffington Post’s investigative magazine Highline on the political and economic impact of the refugee crisis — from smuggling economies in Turkey, to the rise of transnational criminal networks in Africa and a spike of nationalist activity in Europe.

"I first got the idea for the story when I was in the mountains in Morocco," Politzer shared. "I was following the work of the migration wing of the Catholic dioceses which took me to see the camps of migrants getting ready to attempt to cross into Spain. I was told that nearly all the women were in the process of being trafficked; and that their numbers had spiked significantly since the Syrian refugee crisis began."

Then, while visiting Turkey, she noticed that there were street fairs aimed at migrants selling life vests and water bottles and backpacks.

"I began to connect the dots," she said. "A lot of people are making money off refugees." And this is how the idea started. Politzer wanted to look at how economies changed because of the refugee movement.

Politzer has covered Europe's economic recession, the refugee crisis, immigration, identity issues and religious tensions in both Europe and India. She has won multiple awards for her reporting, has published articles in the Wall Street Journal, The Economist, Vogue, Far Eastern Economic Review, Foreign Policy Magazine, Reason Magazine, and Migration Policy Institute’s monthly magazine The Source, and is a regular contributor to Devex.

Kent State is part of the Pulitzer Center’s Campus Consortium network that includes 27 colleges and universities. The Campus Consortium initiative is a core component of the center’s effort to create awareness campaigns around global systemic issues. Previous forums have focused on the topics of fracking and women and children’s issues.

The School of Journalism and Mass Communication and the Gerald H. Read Center for International and Intercultural Education were event sponsors.