From Half Way Around the World, Student Pursues Ph.D. at Kent State 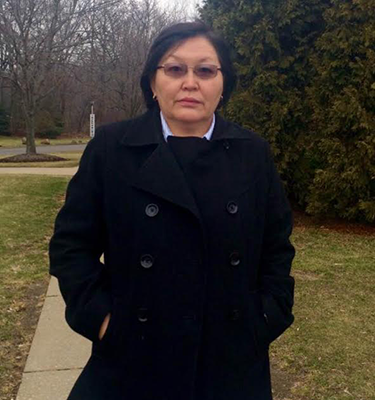 After attending Kent State University as a Fulbright Visiting Scholar during the 2011/2012 academic year, Chynarkul Ryskulova has recently returned to the KSU campus from her home in Bishkek, Kyrgyzstan to pursue her Ph.D. in the Higher Education Administration Program. In addition to the pursuit of her Ph.D., Chynarkul plans to research the U.S. education system, including its accreditation system, assessment of student learning outcomes, quality of teaching, as well as the quality of learning. Following this second academic endeavor at Kent State, Chynarkul hopes to return home and assist in the evolution of her country’s education system.

Prior to attending Kent State, Chynarkul held positions as Vice-President of Academic Affairs, Dean of Academic Affairs, and Associate Professor at the American University of Central Asia. She has also been a professor at numerous universities across both America and Kyrgyzstan. According to Chynarkul, the education system in Kyrgyzstan is typically uniform for all students. She thinks highly, though, of the flexible and adaptive American education system and hopes to emulate it in her home country.

Chynarkul finds it remarkable that she is enrolled in a university that is located nearly half-way around the world from her home. Kyrgyzstan is a former Soviet republic located in Central Asia, which shares its eastern boarder with China. Chynarkul was delighted to have the opportunity to talk about her country and its natural beauty to a group of Kent State students at a recent Cultural Café hosted by the Office of Global Education.

When Chynarkul returned to Kent last August, she brought her teen daughter, who currently attends a nearby public school. She has mentioned that having her daughter here in the U.S. has made her transition much easier and her daughter thoroughly enjoys being in America. Although any time spent away from one’s home country is difficult and challenging, Chynarkul has felt extremely welcomed by her fellow peers and faculty at Kent State. She states that her fellow students have gone out of their way to provide notes for her when needed and her professors have been more than helpful with her research efforts. Despite her time here, Chynarkul eagerly looks forward to eventually returning home with her additional knowledge and fresh insights into the U.S. education system. Plus, she plans to strongly recommend Kent State to potential Kyrgyzstani students whenever she can.