Making a Home-Away-From-Home at Kent State 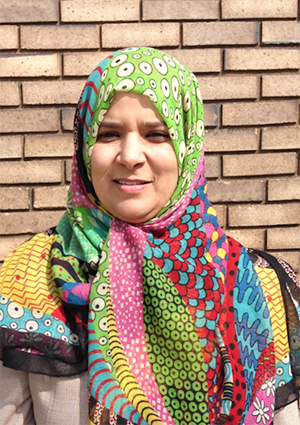 Fatema Nafa is a one-of-a-kind student. She is an enthusiastic Arabic woman from Libya who is currently completing her PhD at Kent State University. Fatema received her Bachelor’s and Master’s Degrees while still in Libya -- both degrees are in computer science, specifically data mining. After completing her Master’s Degree, both she and her husband decided to pursue their PhDs, but knew they would have to do so at a foreign university. The couple applied to the Libyan government which presented them with five countries from which to choose where they could complete their PhDs. After deciding on the United States, they contacted an association for Libyan students who recommended Kent State.

Fatema along with her family – which includes her husband and their three children – came to Kent in 2010 knowing only a limited amount of English. She and her husband enrolled as ESL (English as Second Language) students. Despite the language challenges, though, she and her family found the transition to their new American lifestyle relatively easy, even though they had never previously lived outside of Libya.

"The first year was challenging for us, because we didn’t know much English," explains Fatema. "I took about six to nine months to try to learn from websites and we spent a year at the ESL center. It’s harder for daily life than in school. For computer science, they teach the terms in English all over the world. We still have trouble sometimes, but we often go to our friends or neighbors for help."

"If you have a problem, Kent State will help you. I don’t feel like I’m here without family because the international office (the Office of Global Education) is like my family. They help with department and immigration issues, but they’re also there for me if I have a personal problem. They make everything easier."

Despite her Arabic background, Fatema says she has not encountered any cultural bias since she’s been in the U.S.

"I hear my friends talk about it, but I’ve never felt that. As long as everything with immigration is okay, you have nothing to worry about. Here, I feel like I’m human and I have all my rights. You can keep your culture alive here and nobody will say no."

When asked what she misses the most about her home in Libya, she responded immediately with thoughts of her family. Fatema has five brothers and five sisters and she is very close to them.

"We always used to text and call each other, but here it’s expensive so we can’t do it as much. I don’t miss the food because I know how to make cultural dishes and I can find all the material here. As a culture, I really miss the parties; mostly dressing for the parties because we can go without covering. They close the place and we can wear whatever we want. Only women can go, no men are allowed."

Her children were four and five when they arrived in the United States but she said the move was not too difficult for them.

"The children learned English very fast. They speak perfect English and perfect Arabic. They go to a regular school during the week and an Arabic school on the weekends where they learn the language, culture and Islamic studies. We’ve also tried to have a babysitter as little as possible because it’s so expensive. I took classes in the morning and my husband took them in the evening to makes things easier."

Fatema and her husband are Muslim and are devotedly connected to their faith. They go to Mosque every Friday and pray five times a day.

"Usually we pray two or three times at the university. At ESL, there is a specific room for Muslims to pray but we typically just pray in the lab during our studies. It’s easy because you have to pray at certain times. I don’t usually do it around people, but you can. People are understanding if you just let them know."

Although Fatema loves living in the United States, she and her family are planning to return to Libya after their studies.

"We would like to return home about one or two years after we finish our program because we want to practice what we’ve studied here. Then we’ll go back home and teach others how the teaching level is here."