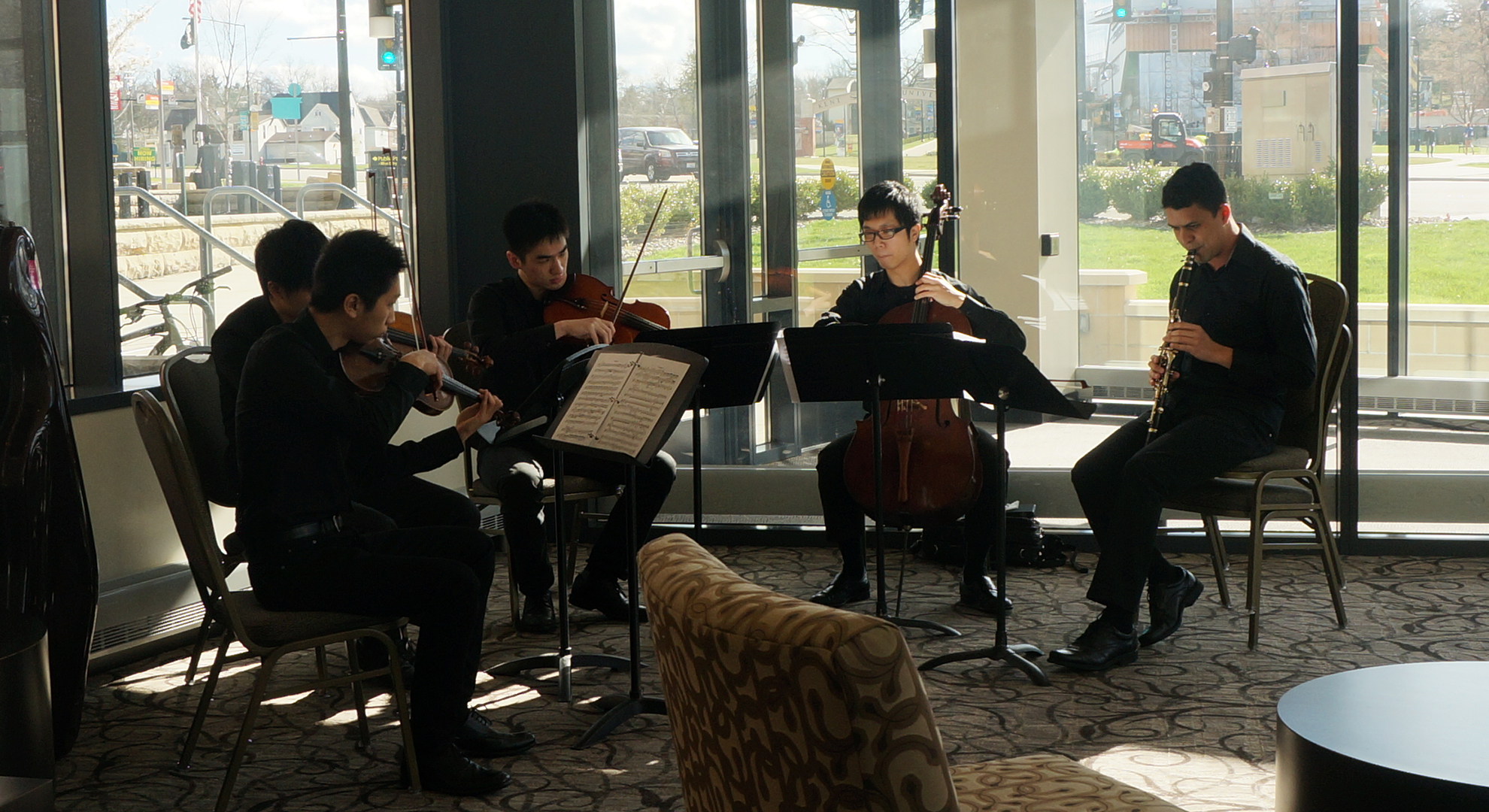 Meet international student Tiago Delgado (far right in the photo above in a performance with the Stopper String Quartet at the 2016 International Symposium), a musician from Brazil who has had an incredible first year playing the clarinet as a Masters of Music student at Kent State. After completing his Bachelors of Music Degree at Minas Gerais Federal University in Brazil in 2012, Delgado moved to the United States to work toward his Performer Diploma at Indiana University’s Jacobs School of Music, which he finished in 2015. Later that same year, he decided to further continue his musical studies at Kent State University.

Delgado’s journey as an accomplished musician began as a young teenager in his home country of Brazil. He knew he wanted to find something he could succeed at, and something he could do that would allow him to provide a source of enjoyment for others. He discovered his passion, however, when he began playing music with his friends. Through his drive and determination, Delgado quickly became an outstanding performer on the clarinet. In fact, he eventually came to realize “I did not choose the clarinet. The clarinet chose me.”

The same can be said about his choice of Kent State. Just as he chose Kent State, so did Kent State choose him. Delgado does not only embody the qualities of the ideal Kent State Student, but also presents a positive vision for the future of both his home country, and the United States.

To achieve his dream of studying music in the United States, Delgado credits the numerous people who supported and encouraged his musical education along the way, including receiving the Kent State’s Orchestra Society George J. Hejma Scholarship during the past 2 years. From the time he has begun his studies at Kent State, Delgado has regarded his learning experience as “very pleasant.”

“When I graduate from Kent State, I will continue to improve my understanding of music, while also trying to help other people through music. With everything happening in the world nowadays, this is the best thing I can do. If I could go back and change anything from the past, I wouldn’t, because I wouldn’t be here at Kent State today.”

Delgado said that one of his favorite accomplishments is being a member of the Kent State community. His main goal at present is to determine how he can best use his music-related experience and education to develop social projects that teach young people, as well as to provide opportunities for the disadvantaged to experience, the beauty of music. He believes that education – especially musical education – is something everyone should have access to.

Delgado completed his initial year at Kent State in a remarkable fashion. In addition to receiving the 2016 Leopold Sipe Award for Excellence in Music Performance at Kent State University, Delgado also won the 2016 Kent State University's Concerto Competition. His recent activities include attending the prestigious Fresno Summer Orchestra Academy (FOOSA) as well as the Scotia Music Festival during the summer 2016. Some of his live performances include Weber’s Clarinet Quintet Op. 34, Mozart’s Clarinet Quintet K581, Villa-Lobos’ Choros No. 2, and Jörg Widman’s Fantasie for Solo Clarinet

For those interested in hearing Delgado play in person as well as supporting his emerging musical career, he invites everyone to attend the next Kent State Orchestra concert, on Sunday, February 19 in Cartwright Hall at 3:00 pm. During the concert, Delgado will be featured as a soloist with the orchestra in the performance of Carl Nielsen: Concerto for Clarinet and Orchestra, You can also follow him on SoundCloud at https://soundcloud.com/tiago-delgado-4