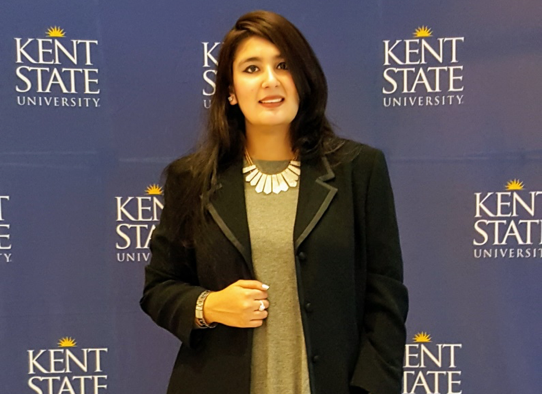 Tahira is an international student from Sialkot, Pakistan. She is here with the Global Undergraduate Exchange Program with Pakistan which is sponsored by the U.S. Department of State to allow her to study at a university in the U.S. for one semester. She comes from a small town in Pakistan where women don’t have opportunities like this one very often. In a family of four, Tahira is the oldest daughter of two. Her parents don’t have boys, which can be seen as a bad thing in her community. Tahira wants to change that and show that she can be a provider for her family, even as a woman.
When she was planning on going to college, Tahira wanted to become a doctor. She wanted to be able to provide for her family and was passionate about medicine and helping others. She took an entrance exam so that she could get into medical school and become a doctor. When she got the results from the exam, she was devastated: she had missed the cut off by only a few points. Angry that the exam that would have given her many opportunities didn’t pan out, she gave up on her dreams to become a doctor. Her parents were sad but they knew that the option to marry after high school was always a good option as well. When Tahira was told she would have to marry if she didn’t go to college she didn’t know what to do. “I was mad because I wanted to make a difference. I wanted to be somebody, not just someone’s wife,” she said. “So I decided that I wouldn’t give up. If I couldn’t be a doctor, I will be something else. I will get up and keep trying because I learned that if I were to give up, I wouldn’t be anybody. I had to be better and provide for my family.”
After some debate, she decided to study biotechnology. This major includes disciplines within biology and technology, which can be used in the medical field among others. Tahira is now in her senior year of studies and really enjoys her major. The opportunity to study in the United States has given her even more inspiration to continue on in this major and try to make a difference. She hopes that once she returns to Pakistan and graduates from college, she will be able to help in some area in the country, whether that be in the medical field, or in a government position, she will be happy to find a job where she can prove that women are powerful too and be able to help others. “Overall, I just want to make my parents proud. If I can say that I made them proud of me, I am happy.”
During her time here at Kent State, Tahira has gotten involved with the Muslim Student organization, the Red Cross, and the campus kitchen volunteers. She loves to serve others and help them in any way she can. She is also interested in archery and badminton and enjoys watching the Kent State basketball and volleyball teams. She loves that the people here in Kent are so helpful and kind. “One thing that surprised me about the people here is that they stop for others in road. In Pakistan, you could never cross a road when cars are coming because they won’t stop. Here, they will stop and let you cross. I think it’s because people respect each other in a lot of aspects.”
Pakistan is a country in Southern Asia nestled in between India and Afghanistan. It is the sixth most populous country in the world and has a very rich culture. Nationally, many languages are spoken in the country and even though Islam is the official religion, many other religions are practiced there. According to Tahira, the biggest cultural differences between Pakistan and the United States are the way women are treated, the importance of family, and the culture surrounding food. “Women are not allowed to share their feelings. If a man is stressed, or worried, or sad, he can share that with someone. But women are expected to remain quiet and not express their feelings. That is what I love about the U.S. Women are free to talk about their feelings as equally as men can. What I love about Pakistan though, is the way we treasure family.” In Pakistan, children live with their parents, grandparents, aunts, and uncles until they marry. The boys stay with their families but the women follow their husband’s family. “You always know that your family will be there for you no matter what. They will always support you.” Pakistani food is very different from American food also. They use a lot of spices and the dishes are always very colorful. “Sometimes it takes a long time to cook the food. It seems like everyone here is just worried about time and convenience when it comes to food, not so much in the quality,” she explained.
Tahira would like to share to other women that it is not hard being on your own and it is possible to do everything that a man does. “I came to the U.S. by myself and others thought it would be too hard for me. I’m not saying it was easy to be here by myself, but it wasn’t impossible. If you believe in yourself and in what you are capable of, you can achieve your goals. Don’t give up. If I had given up when I failed my entrance exam, I would be nobody and I wouldn’t have been able to have this amazing experience. Know that if one thing doesn’t work out, try something else. But you can never give up!”
POSTED: Tuesday, January 22, 2019 01:05 PM
Updated: Monday, February 06, 2023 10:59 AM
Office of Global Education