Mission: Life connects students from all backgrounds, all grade levels and all nationalities to enable the development of innovative designs, ideas, tools, resources, and services to address global issues and concerns. Each year, a different issue is selected and leading students from around the world gather together to cultivate solutions to the issue within a competitive context. Each year, the competition has grown in scope and awareness. Now in its sixth year, Mission: Life VI focuses on Global Sustainable Development in the 21st Century.

The competition operates on two levels, the local and the global. Universities hosting the competition hold a local run-off completion among its participating students and then send the winning team to the global finals to compete with teams from around the world. 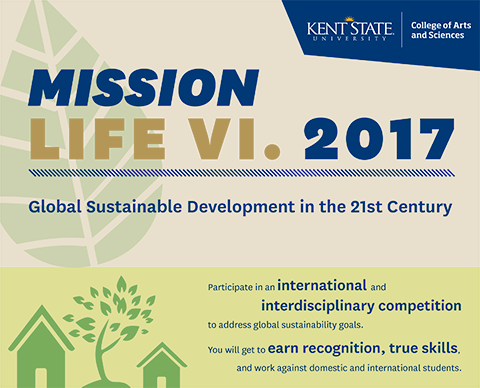 Students from Kent State took part in the competition for the first time last year, when three interdisciplinary teams worked on the theme of One Health. The winning team, SenseUrWater, later travelled to Curitiba, Brazil, over the Thanksgiving break to contend in the international competition. But this year, participating teams will have a “home field” advantage. Following its local Mission: Life competition on October 26 in the new Integrated Life Sciences Building, Kent State will have the honor of hosting the global competition a few weeks later on November 13. The event will serve as an appropriate lead-in to International Education Week 2017, which takes place over the following week.

Mission Life originated in 2012 at the Pontificia Universidade Catolica Do Parana (PUCPR), an acclaimed not-for-profit private Catholic university located in Curitiba in southern Brazil. Kent State has a long history of collaborating with PUCPR and signed a formal strategic partnership agreement with the university in March, 2016. The close partnership resulted in Kent State being chosen as the site for Mission: Life VI. Previously, the school of life sciences at PUCPR has hosted the competition.

“PUCPR is one of Kent State’s most strategic partners,” explains Sarah Malcolm, Director, International Partnerships, Marketing, and Communications for Kent State’s Office of Global Education. “We have enjoyed an active partnership with them since 2012. To date, we have collaborated on several programs – including our International Storytelling course – student and faculty exchanges, and most recently the Mission: Life competition. Currently, we are exploring the possibility of developing a joint liberal arts program in Brazil hosted by PUCPR.”

Kent State Associate Professor and Director of the Biotechnology Program, Edgar Kooijman, has led the university’s drive to participate in Mission: Life and was instrumental in the development of the strategic partnership between the two universities. Kooijman first learned of the program during a visit he made to PUCPR in September, 2015. The purpose of the trip was to recruit Brazilian students to the Department of Biological Sciences. While there, Kooijman was introduced to the program and felt that participation in the program would help to expand Kent State’s global competitiveness.

”As an international scholar myself – I am originally from the Netherlands – I am so excited to have the opportunity to mentor and lead students in international activities at Kent State University," explains Professor Kooijman. "When we joined the Mission Life competition for the first time last year we had three amazing teams that worked on some super relevant issues related to 'One Health.' This year I hope we have many more teams take advantage of this unique research opportunity. I look forward to working with this year’s Mission Life’s teams!”

Professor Kooijman enthusiastically encourages students to get involved in the completion, regardless of their areas of study. He firmly believes participating students will gain many personal and professional benefits, not the least of which is the opportunity to foster lifelong international friendships.

For more information on Mission: Life VI and to apply, please click here.