Attendees at the signing ceremony with Jazan University pause for a group photo.

On April 20, Vice President of Jazan University in Saudi Arabia, Professor Sultan Hasan Al-Hazmi met with members of the Kent State faculty and staff to sign two partnership agreements between the two universities. The agreements included a Memorandum of Agreement, which establishes a mutually beneficial educational and pedagogical relationship between Jazan University and Kent State University, and a Visiting Student/Faculty Amendment, which provides study and research opportunities and cooperative projects among students and faculty from both universities.

Founded in 2006, Jazan University is a public research university located in the city of Jazan on the Red Sea on the southwest coast of Saudi Arabia. It is one of the largest public, non-profit institutions in the Kingdom. It is particularly well known for its medical school, dental school, school of business, its social sciences and humanities programs, as well as its biomedical teaching and research capabilities.*

Professor Sultan Hasan Al-Hazmi arrived in Kent on Wednesday, April 19, and was formally welcomed to Kent State the following morning by representatives of the Office of Global Education led by Moema Furtado, International Partnerships Coordinator for the office. Following the greeting, Furtada conducted Professor Al-Hazmi on a tour of campus. Following the tour, Al-Hazmi met with Debora Rozner, Interim Director of the English as a Second Language (ESL) program to discuss the possibility of conducting English courses for Jazan students during the summer.

Later in the day, a formal signing ceremony was held in the Urban Conference Room within the Library’s Executive Offices. The ceremony was attended by a number of Kent State faculty and staff, including Provost Todd Diacon and Associate Provost Marcello Fantoni, who has been instrumental in establishing and fostering relationship with Saudi universities. Both Diacon and Al-Hazmi delivered short statements about the hopes implicit in the partnership, the benefits the relationship will provide both universities and the importance of global education as a means to better understanding between cultures. Following the signing, Diacon and Al-Hazmi presented each other with gifts commemorating Al-Hazmi’s visit and the formalization of the partnership.

We are pleased for formalize our partnership with Jazan University. This is an important new partnership as it allows us to establish collaborations with such a well-established university in Saudi Arabia.
Sarah Malcolm, Director of International Partnerships, Marketing and Communication

A reception followed the signing ceremony, which enabled Al-Hazmi to meet with Saudi students studying at Kent State. A small group of 16 students attended the reception, and appreciated the opportunity to meet Al-Hazmi and speak with him in an intimate setting. Taking the opportunity, Professor Al-Hazmi gave a short talk to the students in attendance applauding their initiative in pursuing and education in the United States and encouraging them to do their best as academic representatives of the Saudi people. 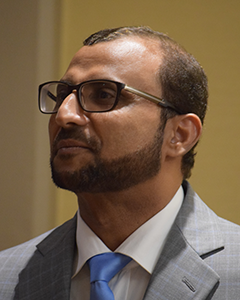 Professor Al-Hazmi obtained a doctoral degree in Applied Linguistics from the University of Essex in the United Kingdom in 1998. He has previously worked in Department of English at King Khalid University, Abha, KSA as Assistant and Associate Professor and Director of the English Language Center.

He joined Jazan University in 2006 where he served as the Dean of Jazan Community College. In 2013 he took the position of Vice President of Academic Affairs. He is also a professor in the Department of English, Faculty of Arts and Humanities. In addition, he served as a visiting professor at the Faculty of Languages at University of Malay.

Professor Al-Hazmi has published many papers in local periodicals and Arab and international journals in the field of “Second Language Acquisition” and “Writing in English as a Foreign Language.” He has also presented papers in scientific conferences and specialized seminars at the local, national, and international level.