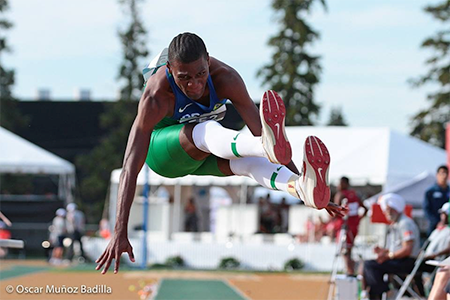 Samory Fraga is a freshman international relations major from Porto Alegre, Brazil.  He is also a long-jumper attending Kent State on a track scholarship. Although he had never visited the United States before coming to Kent, Samory learned English from a young age. Both he and his parents knew that attending an American university was their goal. They wanted to capitalize on a unique opportunity and they knew that having an American degree would help him in the future. Plus, running track was a number one priority for him and colleges in Brazil don’t have sports teams. After attending an international college fair in his hometown, he decided to come to Kent State.

“My favorite part about living here is that I get to be independent far from home. I love living alone and taking care of my own things. It’s preparing me for the rest of my life. I really like Kent too. I like the small, calm, quiet city. It’s peaceful compared to my city. Running track is different too. Here they give a lot of support and there’s a good team behind us. It’s very different than Brazil.”

He doesn’t face many challenges living in the United States because he has travelled all over the world for track competitions and has been exposed to many different cultures, which is also why he chose to be an international relations major. His main task is just getting acclimated to the American way of life and making new friends. It’s the small things that are the hardest to get used to.

“The biggest difference is probably the different measurements, like going from Fahrenheit to Celsius and the dates. It’s the little things that take time to get used to. Also, it's takes longer to get close to people here than in Brazil. (In Brazil) We’re always hugging and kissing and talking close. Here it’s different. People say hello and shake your hand. It’s just always very formal.”

After college, Samory said he’d like to move back to Brazil, but he’s open to other opportunities.

“After school I’d like to come back to Brazil. It’s my home country and I love it. I’d like to go back with a nice background and keep running track. I have a dream to be in the Olympics so I’ll just keep training and try to reach that.”