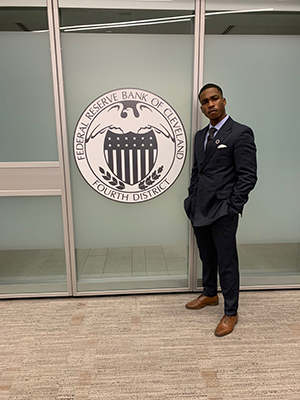 A brilliant finance student in his junior year, Kingsley Akinola brings a worldly perspective to KSU with his unique background. Lagos, Nigeria is populated with over 20 million people of intertwining cultures, and it is the place Akinola calls home.

Akinola says Lagos is filled with diversity, and what he loves the most about Nigeria is the hustle. “Everyone is always hustling, and the hustling culture is inspiring,” he says.

After living in Lagos for 2 years, he and his family moved to Brampton, Ontario where he spent 8 years before moving back to Nigeria. He graduated high school early at the age of 16 years old and made the decision to come to the United States for higher education.

“A lot of parents in Nigeria work very hard to send their kids to school to another country,” he says. “To go to school abroad is a stepping stone in life to have more job opportunities.”

Akinola says going to school to study engineering is common in Nigerian culture, but he was set on taking a different path. He began his college experience abroad as a computer science major at the University of Idaho in Moscow, Idaho.

Always excelling in math and having an interest in the stock market, he transferred to KSU to begin his sophomore year studying finance. When asked what brought him to KSU, Akinola says LeBron James was a driving force in his decision to come to the Cleveland area.

He stays involved on campus by being the treasurer of Pi Kappa Alpha Fraternity and a member of the Golden Flash Asset Management Group (GFAM). In his free time, Akinola can be found playing soccer, staying up-to-date on the investment world, or reading a good book—his favorite being Think and Grow Rich by Napoleon Hill.

When beginning his college experience, Akinola says, “I had the goal to make as many friends as possible.” A loyal friend to those who know him, his value of loyalty comes from the great friendships he built over the years. He enjoys bonding with other international students over European culture and attending events held by OGE.

Akinola says being an international student is on his mind with everything he does and having a different outlook on the world is an advantage he is proud of. He says, “absorbing knowledge and having knowledge” is important and contributes to his worldly view.

His word of advice to others is, “Don’t be afraid to share what you care about.”