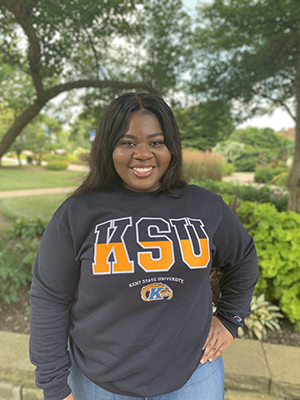 Blaire Thompson is an ambitious graduate student from The Bahamas committed to furthering her education. She is currently enrolled in the Higher Education Administration Master's program at KSU, and has a certification in International Higher Education.

Thompson’s undergraduate studies began in her home country at the University of The Bahamas. In 2014, she moved to Miami, FL to continue her studies in culinary arts and food service management. Both the culinary and hospitality industries are major in The Bahamas, which supported her dream of becoming a chef.

“While in undergrad, I found a love for global experiences and cross-cultural connections, gained a passion for student development, and found my place within education,”Thompson says.

Thompson is currently the Graduate Assistant of Wright Hall within the Department of Residence Services where she supervises, advises, and mentors student leaders. She also recently became a KSU Ambassador, and interns in International Students and Scholar Services at the Office of Global Education.

“Also, I volunteer, which allows me to explore my surroundings and network. I interned at Disney World, which was my first time visiting. I even studied abroad (while studying abroad!) in Deutschland (Germany) and went all over Europe,” Thompson says.

A world traveler with an appreciation for culture, Thompson still recognizes there is no place like home. She says, “There is a reason why aspects of culture like music, food, accents, and traditions are attributed to The Bahamas, because it is unlike no other.”

Thompson partakes in Junkanoo during the holiday season, which is a tradition unique to The Bahamas. “For many folks to get a good idea of what it is, I have to compare it to Carnival, like what is held in Brazil or Trinidad and Tobago, but it is different in many ways,” Thompson says.

Junkanoo is a street parade held on Boxing Day (December 26) every year, rooting back to times of slavery. Large groups of people gather downtown on Bay Street for choreographed and freestyle dances in artistic, colorful costumes. Various marching bands and musical groups fill the streets with music from instruments like cowbells, goatskin drums and trumpets. The Junkanoo festival goes from midnight to dawn, and a winner is announced the next day.

As a word of advice to other international students or those planning on studying abroad, Thompson says it is important to keep in mind what motivates you to study at a university and the support that follows. She says, “this support can be family or friends, they can be faculty or staff, international offices, Facebook groups, and more - never be afraid to ask for help.”