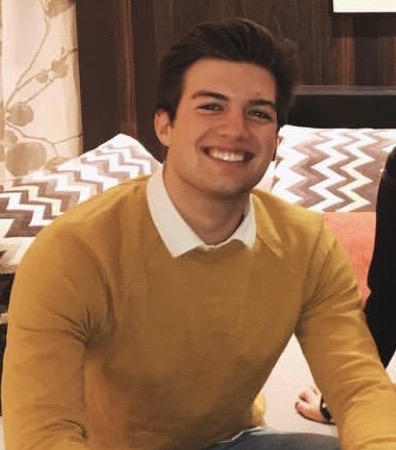 A driven international student focused on staying involved and achieving high academic ideals, Marius Karl is a junior business management major from Vienna, Austria. Karl brings a unique perspective to the College of Business after completing his mandatory military service in Vienna and coming to Kent State in 2017.

In addition to being a member of Ski and Snowboard Club, Karl stays involved in his fraternity on campus serving as the Vice President of Sigma Chi and a team member of the soccer league. “Joining a fraternity was a perfect opportunity to hold myself accountable for doing well academically, being involved on campus, and making a lot of connections,” he says.

As for his next big goal, Karl aspires to work for Red Bull this summer. He says, “Many people do not know that the energy drink company is based out of Austria, which would make it extremely beneficial for me to work there. I could spend the summer with my friends and family back home, while also gaining experience at the world leader in the energy drink industry and a marketing giant.”

Outside of school, Karl can be found practicing one of his favorite hobbies, cooking. He loves challenging himself with new recipes and cooking for his roommates and friends. He feels in every place around the world, food is different and unique to each one.

“While the US is doing a great job of accumulating the world’s best dishes, the place they were founded in still does it best, in my opinion. Wiener Schnitzel, Käsespätzle, Tafelspitz, Kaiserschmarrn or Kaspressknödelsuppe are some of Austria’s most traditional dishes and I look forward to eating them every time I go back home,”Karl says.

Karl’s interest in studying at Kent State began in 2012 after he spent two weeks at a summer camp in Vermont and toured the West Coast with his parents. When his high school graduation approached and he made the decision to study in the United States, his parents were tremendously supportive in him wanting to experience and get his degree in a different country than the one he lived his entire life in.

Karl believes being an international student continues to have a major impact on him as a person. Being away from home helped him find a new appreciation for Austria and the places he frequented growing up. “Studying abroad is definitely something I can recommend to everybody. The amount of people I have met here, that I would have never met if I didn’t come to Kent State is crazy for me to think about. I have met some of my closest friends here – two of which have even visited me in Austria already,” he says.