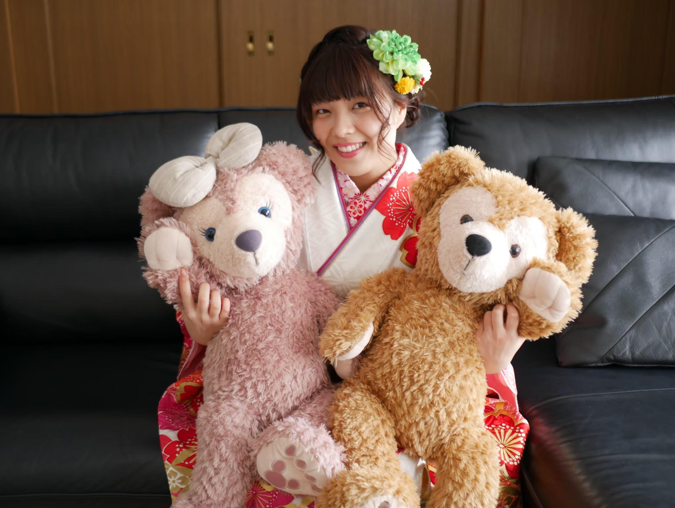 Reika wearing a traditional Japanese kimono with her favorite Disney characters, Duffy the Disney Bear and ShellieMay, for a Coming of Age Day ceremony earlier this year.

Reika Nakano is a Japanese exchange student studying Business Management. Although she’s originally from the small town of Hokkaido, Japan, Reika’s education has been an international affair; before coming to Kent State, Reika attended schools in New Zealand, Canada, and Tokyo. This is her first semester studying in the United States, but she’s excited to experience everything that Kent State has to offer.

When she was only 15 years old, Reika studied abroad in Ashburton, New Zealand, but she wasn’t prepared for the culture shock. She explains: “Everything was just so different! Even though I studied English a lot, I couldn't understand what they were saying, and my motivation took a dive.” Reika notes the importance of maintaining a positive attitude while studying abroad—transitioning to a completely new culture can be challenging at first, but it is also an opportunity to grow.

After participating in a summer business course at the University of British Columbia, Reika decided to study in the United States to improve her English skills in an international business setting. Reika chose Kent State University for its robust business program and scenic, green campus. “I really wanted to stay in the countryside, like my hometown in Japan,” she explains. Reika loves how big the campus is, and spending time in Kent’s greenspace lets her feel refreshed every day.

Although she’s only been in the United States for a few weeks, Reika’s favorite parts so far are the people and the food. "The people here are really friendly! In Japan, people don’t do things like say hi to strangers. Everyone here is so nice.” Reika admits she’s still surprised by how large the portions are at American restaurants. She says, “The food is like, huge! I like the food here, but I also really miss Japanese food. I think it’s the best food in the world.” Her favorite American food so far is mac and cheese, and she eats it every chance she gets.

When she’s not travelling, Reika loves to stay busy—back home in Japan, she worked three part-time jobs in addition to an internship where she taught English to Japanese kids by playing soccer. For one of her jobs, Reika worked at television news station where she did field research on social media. She hopes that this industry experience will one day help her land a job working for a major television network. She says, “I haven't decided on my future yet, but I really love TV and I think working [in the field] could be fun. My boss at the station said a lot of the workers [in Japan] don’t speak English, so it’s a really valuable skill to have.” Reika is trying to keep busy at Kent by taking a full course load and participating in Kent’s women’s soccer club, but she’s always looking for more opportunities to meet new people and experience new adventures.

Another one of Reika’s part-time jobs was at a Disney store in Tokyo that gave her free passes to visit Disney locations around the world. So far, she has been to Disneyland resorts in Orlando, Shanghai, Tokyo, Hawaii, and Hong Kong, and she’s planning to travel to the California and Paris Disneyland locations before the year is over. Her goal is to visit every major Disney destination before she turns 21 in January.

Reika thinks everyone could benefit from the kind of world traveling she’s been able to experience. She says, “I think that people should go to other countries. They should get exposed to different cultures to learn their perspectives and knowledge. I think it's the best way to expand your horizons and grow.”