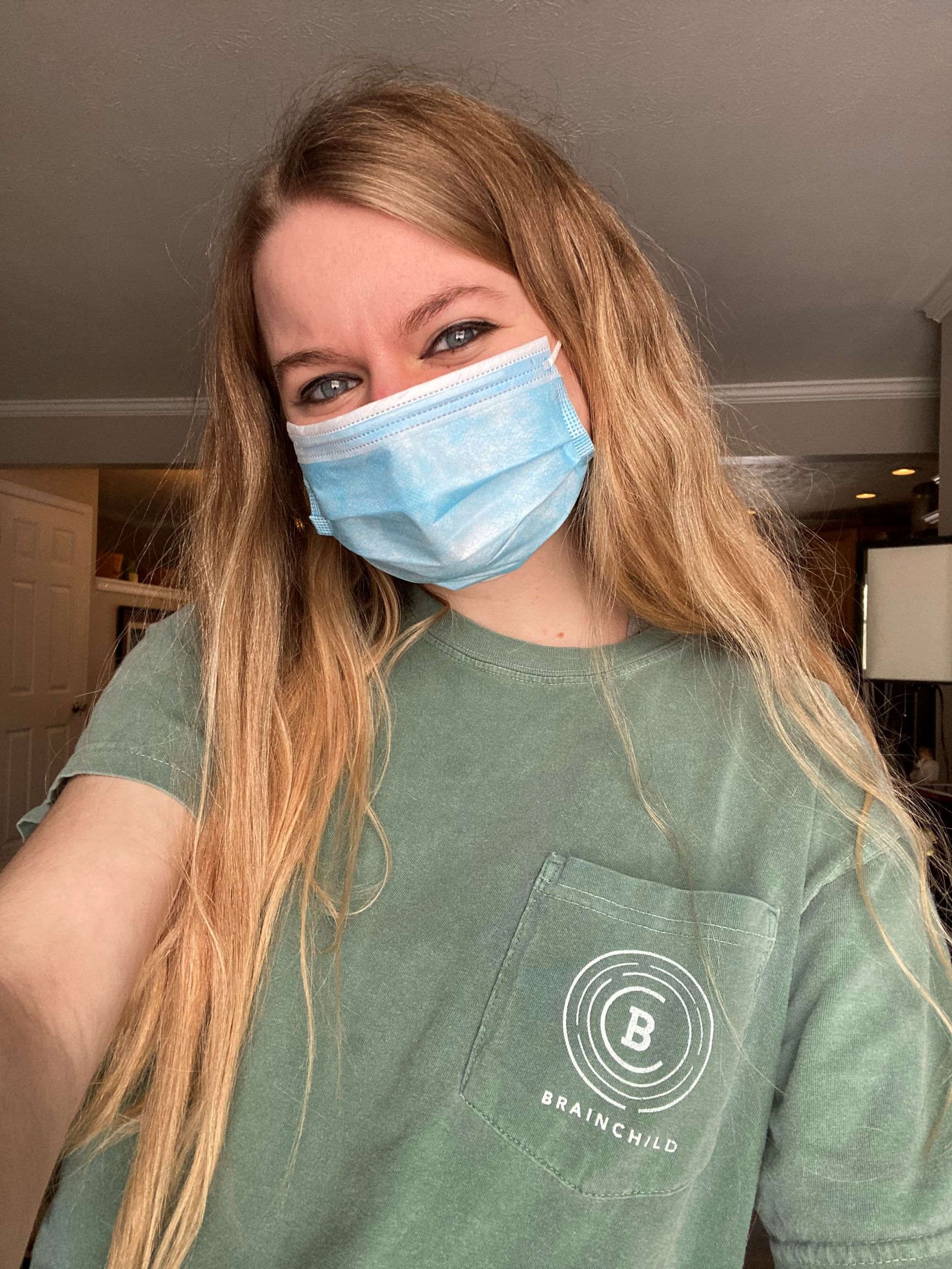 Megan Hamilton is a senior Honors College student, majoring in English with a minor in women’s studies. Since the 2020 Fall Semester, Megan has also been the Editor-in-Chief of Brainchild, the student-led literary and arts magazine at Kent State’s Honors College. Brainchild is also a member of the Mid-East Honors Association, an organization serving and connecting university honors programs throughout the mid-east region. Megan worked on the magazine’s editorial staff in the 2019-20 academic year, and she loved the experience. After her fellow staff members encouraged Megan to apply for the Editor-in-Chief position for the 2020-21 academic year, she recalls, “I honestly realized I wanted to apply after the start of the pandemic. With everything seemingly crumbling around everybody, I knew the importance of art as an outlet, and I wanted to focus on helping Brainchild curate an environment that encourages people to keep making [art].”

Along with this hope of fostering creativity, one of Megan’s primary goals as Editor-in-Chief is to support art from traditionally marginalized groups, such as BIPOC and LGBTQ+ artists, and one way she has fulfilled this goal is through the magazine’s submission process. Each year, Brainchild accepts creative submissions from Honors College students, out of which a select few submissions are published in the print magazine. In the past, the magazine offered a cover letter option in the submission process, which allowed students submitting to add information about themselves to their submitted work. This year, Megan and her team decided to remove that section of the magazine’s submission portal. “Not that the biography ever had a deciding factor,” Megan says, but separating a submission from any identifying information about the artist “help[s] to encourage diversity in submission because we aren’t making decisions based on anything else besides the work itself.” Though Megan is proud of the work she and her team have done this year to promote diversity in artistic and literary publishing, she says it is just the beginning of what she hopes to see the magazine accomplish. In light of the pandemic, Megan was not able to partner with other organizations to promote artistic diversity through in-person events, but she hopes that in the future, Brainchild will be able to make those connections and better support diverse creativity.

Megan also notes that her time as Editor-in-Chief has fostered personal growth. “I have come out of my shell so much in the past few years,” she explains. Megan says that being surrounded by so many talented staff members was intimidating at first, but that becoming Editor-in-Chief helped her challenge herself to lead with confidence and not to judge herself based on other people’s strengths.

Not only has the magazine been a chance for Megan to grow personally, but she also notes how Brainchild has helped her develop her career goals. After graduation, Megan hopes to attend graduate school, ultimately becoming a college professor, and within her graduate studies, Megan plans to focus on gender and sexuality. She notes that working on the Brainchild staff has allowed her to see the real effects that gender roles have on individuals, and how art is a way in which people process that impact. Megan explains that the pressure of gender roles “can lead to a variety of mental health and physical issues that, artistically, can lead to commentaries on those anxieties, on body image, on figuring out sexualities and gender identities outside of the traditional box, and the list goes on. We get those pieces in our submission pile, and I find myself wondering how different the lives of these artists would be if culture and society weren’t so unforgiving.” This experience with diverse artistic submissions has reinforced Megan’s passion to focus her graduate studies on the complex role of gender and sexuality within society.

When asked what she would say to fellow honors students considering applying to a creative organization, Megan said, “[J]ust do it! Underlined, bolded, italicized, all caps--just do it and be confident in your abilities and your general self.” She remembers how intimidated she was to first apply to Brainchild, but Megan reflects, “[It] ended up being one of the greatest experiences in my undergraduate career.” Megan is grateful for her time on the Brainchild team, and she is very excited to begin graduate school and keep advocating for marginalized voices.

PHOTO CAPTION: Megan Hamilton, Editor-in-Chief of Brainchild, wearing a mask at her home in Stow.