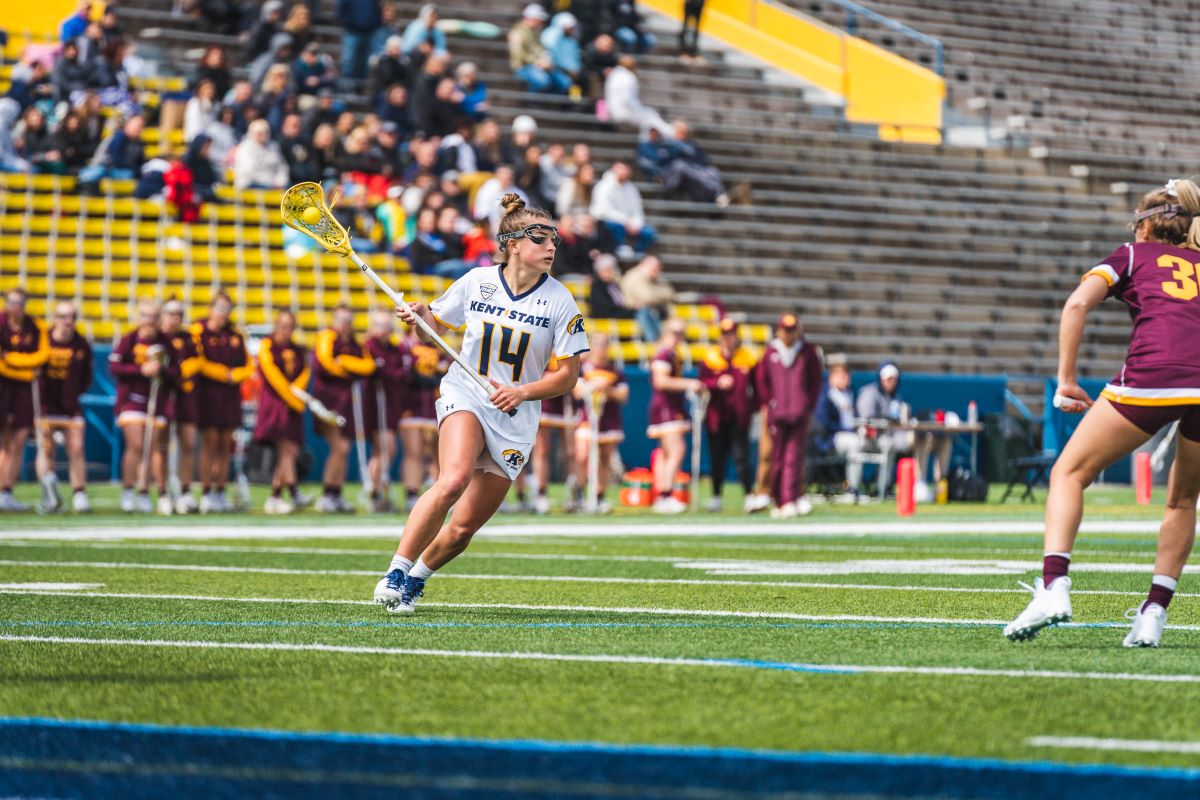 Translating Success in the Classroom onto the Field

In recent decades, the game of lacrosse has grown in popularity, especially among the high school and college population. In spring of 2018, the Kent State women’s lacrosse team 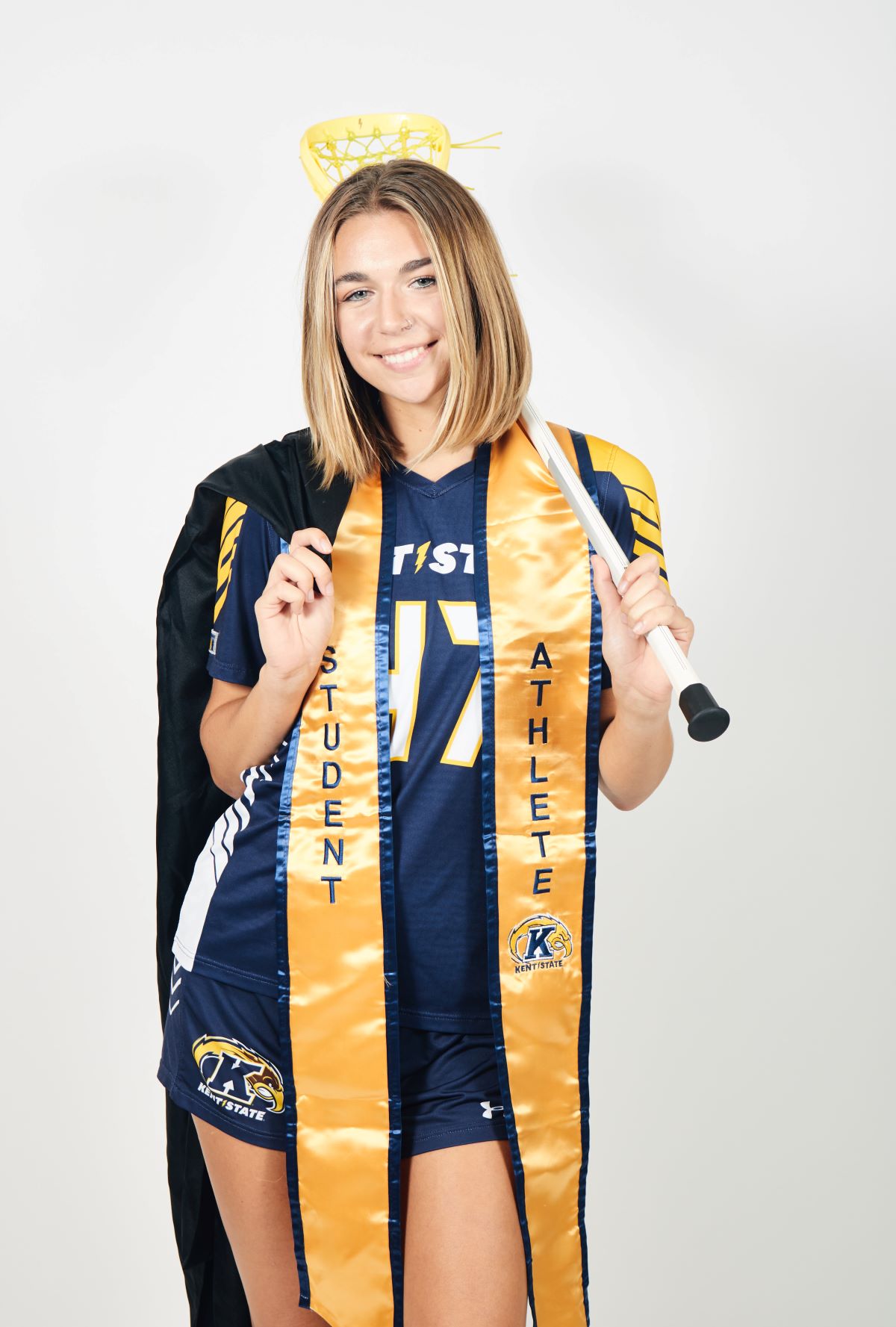 became the first new women’s Division I sport to be added to the Kent State University roster since women’s golf was added nearly two decades prior. As one might imagine, a new sports team has much to prove, and these collegiate athletes are no different, with attempts to validate themselves both on the field and in the classroom each day. Junior Taylor Monturo and seniors Allison Kortowich and Kenzie Sklar are all members of Kent State University’s women’s lacrosse team, as well as students in the Honors College. Though they spend many hours in practice and on the field, academics are always a priority.

Allison is a fashion merchandising student with minors in fashion media and marketing. She plays defense and serves as a team captain. Taylor, a goalie, and Kenzie, an attacker, are both nursing majors. All three girls love playing lacrosse in college and claim it was one of the best decisions they have ever made. According to Taylor, “You really have to love playing the sport,” to make the most of playing collegiately because it requires a lot of time and dedication.

A critical part of being a successful student-athlete in a Division I sport is finding a balance between school, the sport itself, and free time. For Kenzie and Allison, finding ways to stay organized has led to success. Kenzie says that to stay on top of her schedule, she uses  a planner. “It’s my saving grace. I will spend a good amount of money on a planner because I will write down everything.” Meanwhile, Allison uses a program called Notion. “Notion has been my lifesaver for the last three years… it’s like having a planner but on my computer.” She describes it as a platform that can meet many needs, like creating to-do lists and budgeting, but she primarily uses it to plan out her schedule. She also uses a calendar on her phone for everything else besides lacrosse and school, like hanging out with friends. “Everything has to be in [my phone calendar]. That has been really helpful in staying on track and not missing events… all the little stuff on top of practice and school.”

Taylor’s trick for success is to identify the time she has for school and then use it wisely. “I try to limit how much I use my phone, and when I am working on homework, I try to limit all my distractions so that I can get assignments done faster. I don’t have much free time so using it wisely is most important.”

Brianne Tierney, head coach of the Kent State women’s lacrosse team, described sports as a “microcosm world where you can learn life lessons with no life or death repercussions.” She says the Honors College is an additional layer to that which asks more of its students and will translate lessons like adversity and responsibility into real life. Tierney also noted how influential the learning specialists are to the success of the students, such as academic advisors, tutors, and many more, who help students develop these lifelong skills.

Allison, Kenzie, and Taylor all said that the women’s lacrosse coaching staff played a role in deciding to attend Kent State. When recounting her decision process, Kenzie said: “I fell in love with my coaches, fell in love with the team, and it ended up being the easy answer because it filtered down to all my yeses.” Allison also mentioned that she instantly got along well with the coaches when she met them, talking about them to her parents as if they already were her coaches before committing.

An advantage that Kent State has over many other universities and colleges in Ohio is its distinguished programs. For Kenzie and Taylor, who are both studying to be nurses, Kent State has one of the largest and most respected nursing programs in the nation. While lacrosse is a big part of her life, Kenzie said that she wanted to pick a college that would lead to a good career. “I am playing lacrosse for four years but this job is going to be my life, so I wanted to be set up for that, and Kent State has one of the top ten nursing schools in the country,” she explained.

As for Allison, who grew up in Avon, Ohio, she had always wanted to go to Kent State for fashion. She had doubts though, in high school when she had thoughts of selecting another major, but after touring Kent State’s campus, she committed very quickly to the university. Allison explained that she decided to start out in fashion to see if she truly liked it and ended up falling in love with it. To her, it felt like an “everything happens for a reason, stars align moment” because of Kent State’s lacrosse coaching staff, her teammates, and the school’s accessibility to one of the top fashion schools in the nation.

After committing and beginning college, the girls started putting in the work required of Division I collegiate student-athletes. As Honors College students, they carry an extra workload that other students do not have. “I loved the idea of having something that would challenge me outside of fashion courses,” Allison said about being a part of the Honors College. “And I am also really big about trying to differentiate myself and setting myself up for success with careers.” For Kenzie, one of the great advantages of being in the Honors College is the small class sizes. There are about 10 to 20 students in her Honors courses, which is rare for nursing students. Kenzie also noted that the Kent State Honors College has led to excellent opportunities in research. All of her Honors courses are research-heavy and writing-intensive, which can set her apart from other nurses. Taylor also appreciates the accessibility to research. Along with school and lacrosse, she participates in a research study through the Honors College and her nursing program, developing a prototype that would help children with asthma. “I think [the Honors College] is really helpful, and, of course, a great resume builder for the future,” Taylor said. 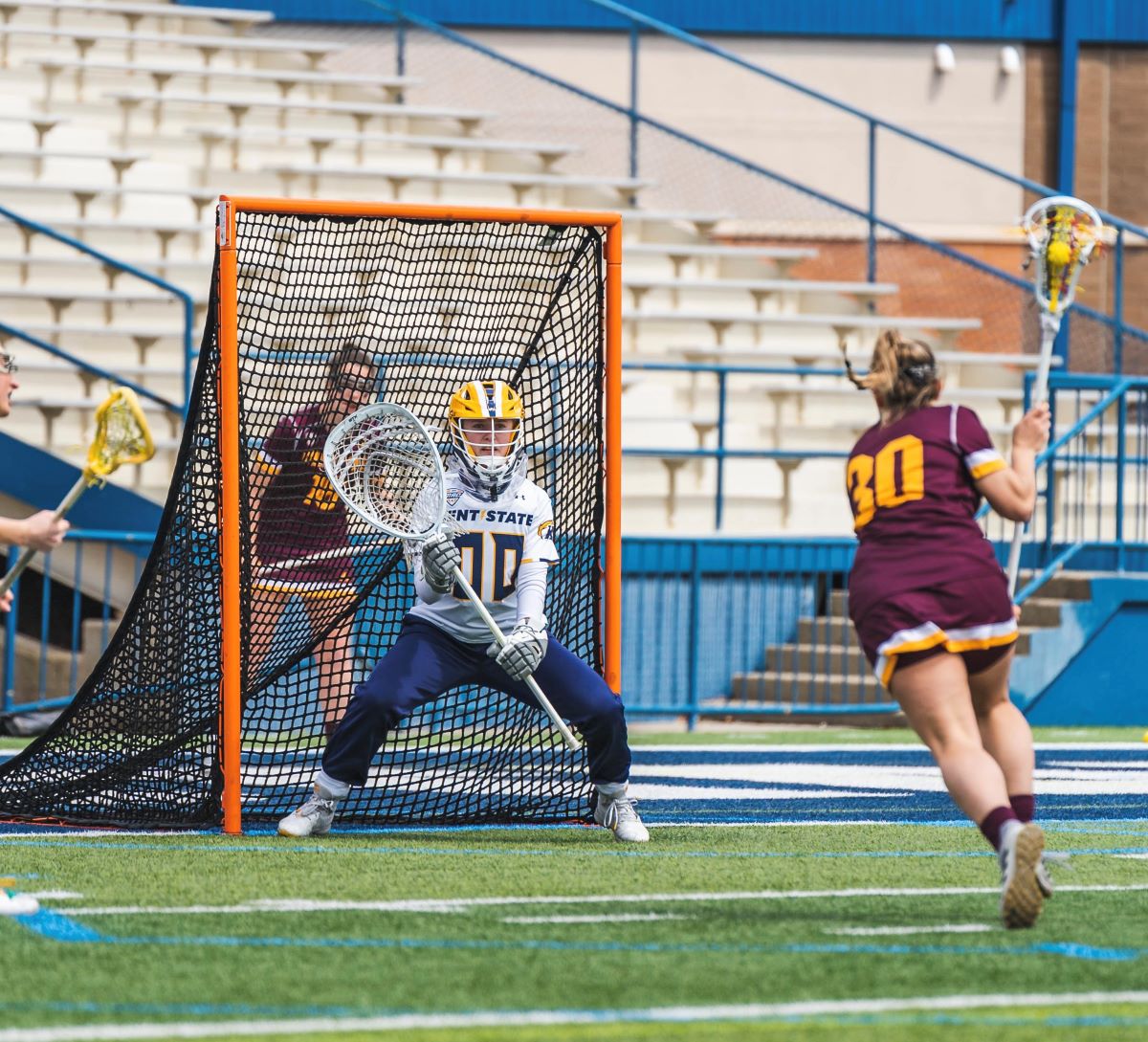 In the spring, when lacrosse season is in full swing, the girls’ schedules get a little more intense. Allison explained that, essentially,   there are two seasons - the fall and spring. While “fall ball” allows them to have an identical practice schedule as the spring,   less traveling is required because it is not the main season. As a result, the spring season requires more planning for schoolwork.   Taylor says that she tries to avoid having work while traveling for an away game, but that rarely happens. So, she makes a to-do list   of assignments to complete on the bus. Kenzie says there is a lot of self-discipline required to get your assignments done on the   bus because while traveling offers a change of scenery, it can also pose distractions. However, their coaches emphasize the team’s role   as students and implement study hours.

Allison, Kenzie, and Taylor described the study hours as a designated time when the team quiets down and focuses on schoolwork.     Allison says that the coaches set them up for success with the group study hours because they are required even when the team is   not traveling for games. “They have made a strong emphasis that you are a student as well as an athlete,” Allison said. Coach Tierney     emphasizes the importance of academics in her program: “If you are taking care of all the other things, the wins will come.”   Tierney elaborated that taking care of things like schoolwork, each other, and mental health will lead to success on the field.

Through the successes and struggles of being an Honors College student-athlete, Taylor, Kenzie, and Allison have learned a lot. “I think so much can be learned when you are challenging yourself each day and you’re constantly trying to get better,” Taylor said. All three student-athletes explained that time management and discipline have become skills they will carry with them into the future. Allison added that she has learned how to handle criticism, describing it as a learning tool that will set her up for life. Kenzie pointed out that she has learned more about taking care of herself, like drinking plenty of water and eating healthily. Similarly, Taylor has learned about herself, such as what her limits are - which is more than she thought before.

PHOTO CAPTION 1: Honors College student Kenzie Sklar lines up to throw the ball during a home game versus Central Michigan.

PHOTO CAPTION 3: Honors College student Taylor Monturo plays as goalie and lines up to block an eight-meter shot versus an opponent.