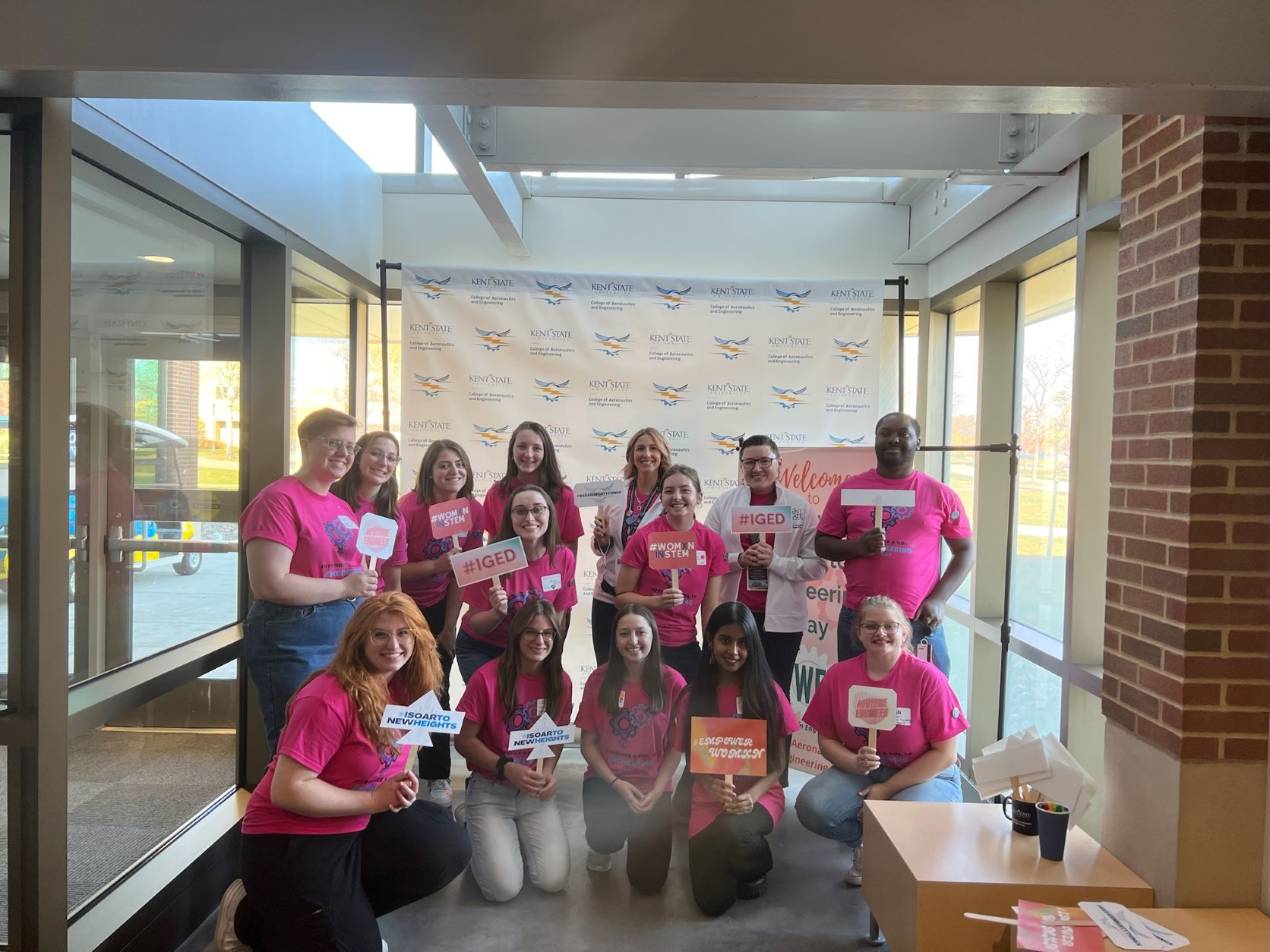 Women in Engineering Club Builds Organization from Ground Up

As an aerospace engineering major, Ruth Miller knew that Kent State didn’t have a women in engineering club on campus, but she didn’t become discouraged, she became determined.

She rolled up her sleeves and got to work with sophomore Autumn Ohl and junior Haley Dees to build a brand-new chapter at Kent State.

The KSU Women in Engineering Club was founded in October 2021. Miller, a sophomore Honors College student from Pittsburgh, is the group's president. Ohl, who is also an aerospace engineering major from Sarver, Pa., is vice president of the club.

“I wanted to be the person to bring the opportunity that I knew other universities had for women in engineering to Kent State,” Miller said.

The group is not affiliated with any external organizations, but members are working toward becoming an official chapter of the Society of Women Engineers, said Dees, the club’s event coordinator, from Lisbon, Ohio.

“We hit the ground running,” said Dees, an Honors College student. “We went from five officers in October 2021 to 26 total members in May to 35 members in October. The growth has been incredible.”

Last weekend, the club and Kent State's College of Aeronautics and Engineering hosted Introduce a Girl to Engineering Day. During the event, 18 girls and other gender minorities in grades 7-12 visited campus for a day of fun STEM and engineering-themed activities. The goal of Introduce a Girl to Engineering Day was to “introduce these youth to the culture of respect and support that Kent State University and the College of Aeronautics and Engineering creates for women pursuing degrees in male-dominated fields, such as engineering.”

The students came from a variety of area schools, including Twinsburg, Stow-Munroe Falls and Freeport Area School District in Pennsylvania. The event was an opportunity to let today's students know that engineering is accessible.

“I was happy to see the next generation of women in STEM on our campus,” Miller said. “It was inspiring to see girls interested in STEM.”

Dees said the parents commented on how much they enjoyed the event as well. 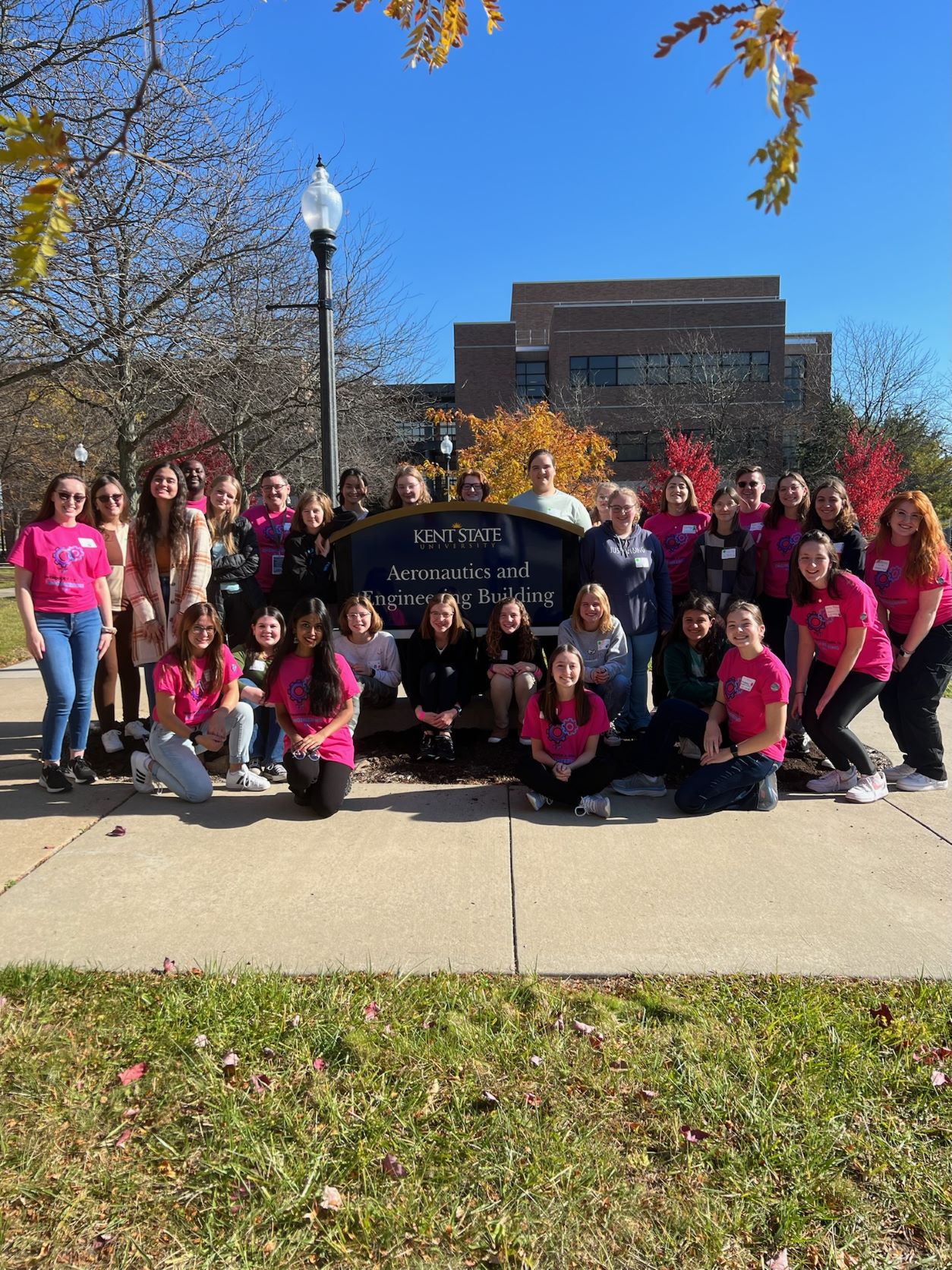 Since its inception, the KSU Women in Engineering Club has been quite busy.

In March, the club hosted the first Womxn in STEM Collaborative Meeting, which brought together groups that focus on women and gender minorities in STEM for an evening at the Women’s Center. The groups learned about each other and their upcoming events and had the opportunity to mingle.

The club has also hosted guest speakers from the College of Aeronautics and Engineering, Career Exploration and Development, and Tesla.

“We have not officially begun planning for spring, but we plan to bring in more guest speakers to talk about career options in the engineering field, résumé building and other professional development related topics,” Dees said.

For questions about the KSU Women in Engineering Club, contact Miller at rmill179@kent.edu.

If you are interested in becoming a member of the group, fill out the informational form and join the club's GroupMe at https://docs.google.com/forms/d/e/1FAIpQLSeFWjrIEqNrKg6Qxyf0bpGg6Nm5x9mqllT-tZ23dPTFmcjqIg/viewform?usp=sf_link.