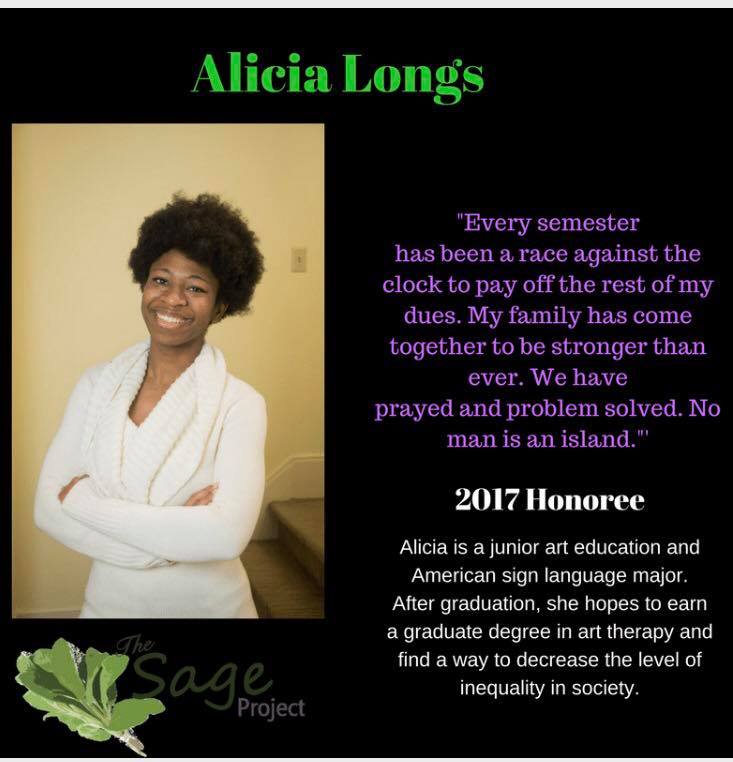 Alicia Longs is a quiet storm. She is creative and kind, but don’t let that calm exterior fool you -- she is a force of nature. She enjoys living her life “out loud”. Although talented in many things, Alicia knew from a young age that she wanted to be an artist. She tells the story of a “cell project” she had to do for a 6th grade science class, and instead of going the easy route, Alicia had her cell diagram broken down in a drawing as Santa’s workshop -- trifold display and all.  She loves working with her hands, evident by her Art Major with minor in American Sign Language.

She credits her parents as being a strong influence in her life, “helping to mold her into who she is…even if they don’t always agree”. Family has played an important role in providing support and encouragement for Alicia. She describes her younger sister as an important influence, not because they are alike but because they are different and balance each other. Alicia’s sister is calm, logical, and a problem solver providing balance for a more emotional Alicia.

Alicia has overcome many obstacles in her life, and she works hard because there is no other option. When faced with financial difficulties, transportation issues, and balancing work and school, she has not only found a way to make it work, but has maintained a great GPA and is committed to remaining positive and enthusiastic about her learning. That is just what she does and who she is; failure is not an option for Alicia, and she fully believes her grandmother was the one who gave her that strength.

Alicia describes herself as an activist who is concerned about rights and recognizing the impact of intersectional identities, an ideology reflected in her favorite quote by Desmond Tutu: “If you are neutral in situations of injustice, you have chosen the side of the oppressor.” Her professor Dr. Hoeptner Poling shares that Alicia “calls out discrimination and strives to understand people of different backgrounds, abilities, and nationalities.” So much of who she is as a person and her selection of her program is based on her deep desire to help people, to “build bridges and include people that society has pushed away”.

When asked what advice she would give to others, she shared “Remember to say Thank You. Treat everyone with respect. Everyone deserves to be treated kindly. Be a good listener. Everyone in this life has something to teach.”