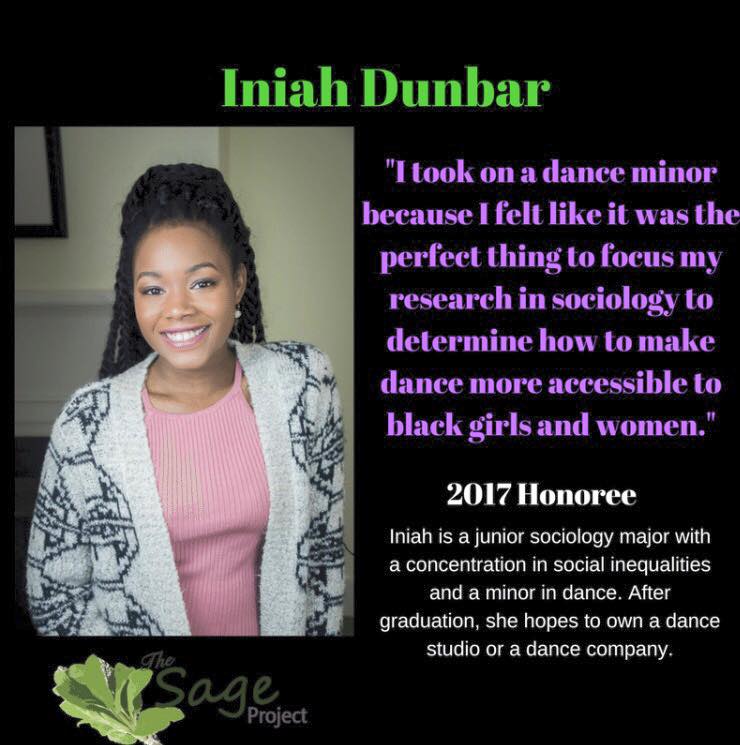 When Iniah entered college for her freshmen year, she was just another face in the crowd trying to figure out the path she wanted to take.  Because she was the first person in her family to attend college, she did not know what to expect.  She was ready for the journey, but nervous for the challenges college would inevitably present.  Throughout all of those challenges, however, Iniah knew she was destined to rise above.

Destiny met reality freshmen year when Iniah attended her first Renaissance Ball.  She was a part of the pageant portion of the night, and she was excited to represent herself in front of her peers.  When it came time to answer her question, she took a deep breath and responded with eloquence and honesty.  Iniah expected the same results as the other contestants: applause and support.  But she did not receive the same treatment—no one clapped, no one cheered, and no one supported her.  In that moment, Iniah learned that the only way for her to be successful and fulfilled in her life would be to stay true to herself and not let the opinions of others distract her from her goals. That very belief helped her conquer other tough situations that came her way.

That same freshmen year, Iniah also learned that she would not be allowed to pursue her dream of being a dance major due to her lack of technical training.  Iniah was already aware that being a black woman in the field of dance would present its own set of struggles, but she was not expecting this hurdle.  Dance was her dream, and Iniah was at a crossroad on how to turn that dream into a reality.  That is when Iniah turned to inspiration from her role model Misty Copeland.  She sought out the same courage Misty displayed by overcoming inequalities to become the first African-American principle ballet dancer and transformed how dance could be represented in her own career.  Iniah decided to declare her major in Sociology with a concentration in Social Inequalities and a Dance minor.  She knew that making this decision would lead her to be able to change someone’s life one day.  Iniah was aware that with the skills she would learn she would be able to help people with the same dream of dance as her.

From that moment on, Iniah hit her stride.  She has taken her passion and turned it into opportunity.  Iniah has started her own organizations here at Kent State, she has held a position on the executive board of Black United Students, she has mentored for Upward Bound and Kupita/Transiciónes, as well as performed in multiple dance showcases.  But reaching these successes has not been a solo adventure.  Iniah has received help along the way from mentor Dana Lawless-Andric.  When asked, Iniah says that Lawless-Andric has been the pivotal person in her journey at Kent State.  She was the women who took Iniah under her wing, made doors open, and always seemed to have an opportunity waiting for Iniah.  It has been individuals like Lawless-Andric who have continued to keep Iniah pushing and working hard.  Iniah even states that what keeps her motivated is, “knowing if I quit, no one else will do the work. I will not and cannot quit”.

Iniah Dunbar is a person of grit.  She has never given up when a situation seemed overwhelming or impossible, and Iniah contributes these lessons to the Kent State community.  She says that Kent State has shown her the meaning of solidarity, forward thinking, letting your voice be heard, and that someone always has your back.  Iniah says that imperfection is perfection and we are made and created to be the people we should be and see in each other and to let that be your guiding light.