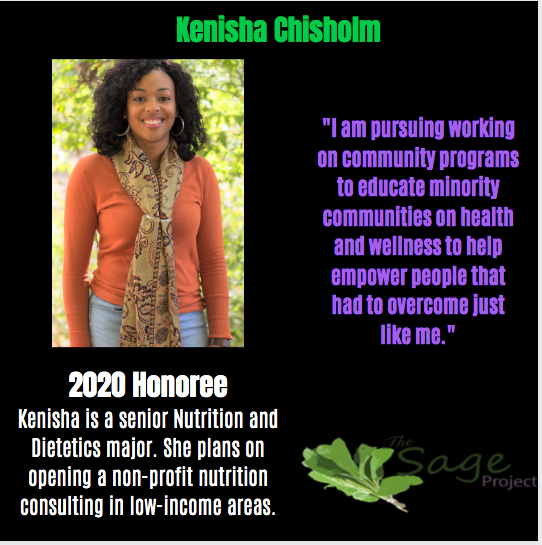 Kenisha Chisholm started adulthood at a young age, helping raise her sibling at the age of 12 while her mom worked to provide for the family. Kenisha wanted more from life, so she attended college to pursue a nursing degree right out of high school. Kenisha became pregnant at the age of 19, dropping out of school to focus on being a new mom. During this time, she also realized that nursing was not what she ultimately wanted to do.

“I’ve been told by many people that I wouldn’t graduate college because I had my daughter at 20 years old,” Kenisha said. “I really want to prove to them that that’s not true, I can do it, and I am doing it.”

This negativity only pushed Kenisha forward. She started taking community college classes where she decided she would pursue a major in business in accounting. But this was not her passion, so she postponed her education. During that time Kenisha focused on her and her daughter’s life and exploring what her passions were. Kenisha had a love of natural ingredients and valued the importance of natural medicine and healthy habits.

When a friend pointed out she could turn that into a career, Kenisha applied to Kent State, where she heard the nutrition program was well recognized.

“I felt like this is where I needed to be. It all made sense, it really started to click,” Kenisha said. “The more and more I learned and the further I got into the program, I really felt passionate about it, it aligns with my personal values.”

It wasn’t until Kenisha’s job shadowing with a naturopathic doctor when she realized how many health issues are influenced by nutrition. Her passion for helping others and educating those who are unaware of the impact of nutrition drives her.

Kenisha wants to give back to inner cities, specifically African-American communities and youth by educating them on health and nutrition. She is fully aware of the lack of nutrition education in schools, especially in diverse areas. First, she plans to go for a Master of Public Health at Kent State and then practice as a registered dietician.

As a nontraditional student, Kenisha took advantage of all of the resources Kent State provided to her. She participated in the Literacy and Independence for Family Education program under the Center for Adult and Veteran Services where she had many opportunities to study and even earn book scholarships. The Women’s Center was also a huge help for Kenisha, like the occasional family dinners for single-parent students where her daughter plays with Kent State student caretakers while she has the opportunity to study.

Kenisha’s upbringing has left her the motivated and inspired woman she is today. Kenisha wants to be able to pass this mindset of success on to her daughter, and knows the best way to do so is by making it happen for herself first.

“You really have to believe in yourself. If you don’t believe you can do it, you won’t. In the past; I didn’t see myself graduating, I couldn’t envision that for myself,” Kenisha said. “I can see it now because I believe it, and I believe it because I pushed myself when I didn’t want to be pushed.”