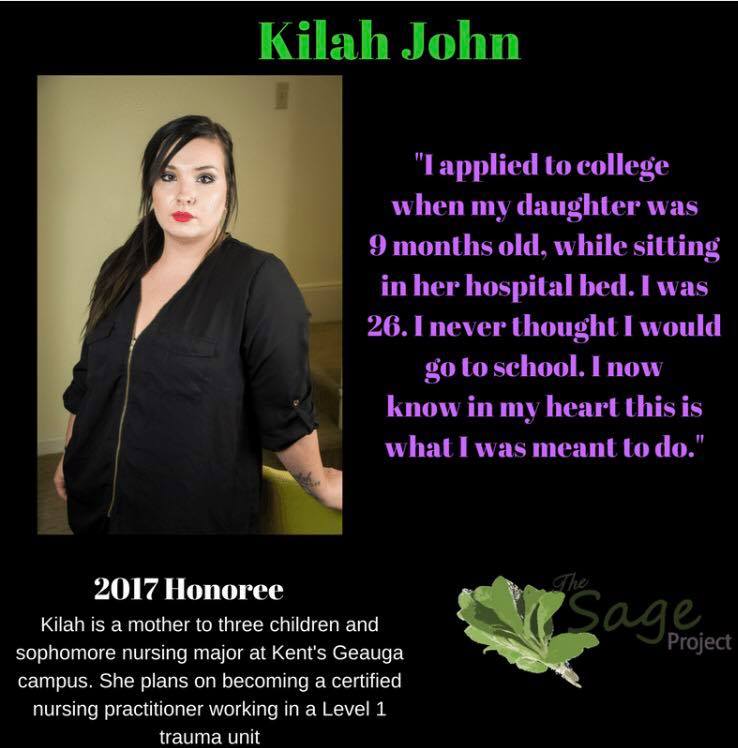 “Happiness is found, even in the darkest of times, if one only remembers to turn on the light.”

--Albus Dumbledore, Harry Potter and the Prisoner of Azkaban

Kilah John has gone through some hard times in her life, and the light switch was not always easy to find. If you had asked John what she would be doing with her life when she was younger, John would not have told you she would be getting her bachelor’s degree in nursing at Kent State. She experienced an inconsistent housing situation through a broken foster care system. Moreover, John says she did not do well in high school, for she did not apply herself. She was under the impression that she was just one of those people who was not good at school.

After high school, John admits she was nowhere near ready for college. She ended up having children – two daughters and one son – and getting married, and she thought she would be a stay at home mom. That started to change when John gave birth to one of her daughters, who was born with severe health issues. John ended up spending a lot of time in the hospital—she practically lived there. Through all that time and exposure, she became fascinated with the medical field. She met nurses who were amazing and, unfortunately, some who were not. After a while, a light turned on and John saw she could become the kind of amazing nurse she had for someone else. From her experience and knowledge of what it is like to need help, John believed she could perform the job with competency and compassion.

In order to pursue a career in nursing, John applied to Kent State University - Geauga: “Signing up was really nerve-wracking. I was so afraid I wouldn’t get accepted in the first place. And then I did.” At Kent State, John started to find her academic groove. The professors at Kent - Geauga have really supported and helped her do that. They offer extra lectures, let her know when certifications are being offered, and really strive to have students connect and apply their knowledge to real life situations. In addition, John works hard and advocates for herself. When she gets questions wrong and does not understand why, she talks to her professors to figure out what she can work on to improve: “You can’t sit back and expect things to change. You have to be your own voice.” John flipped on the switch and is now excelling at Kent. Right now she’s the top of her class – a position she aims to maintain.

In the future, John confidently claims that she will be saving lives. After earning her bachelor’s degree, she hopes to work at University Hospitals in Cleveland for a few years in order to give back to and be a light for the hospital and community that has supported her family.  John also has graduate school in her sights, and she is aiming to become a certified nurse practitioner in critical care. Through her own aspirations, John “wants to show [her children] that no matter what circumstance you come from or what circumstance you’re in, you can persevere and get through anything. And I’m motivated to prove to myself that I can.”