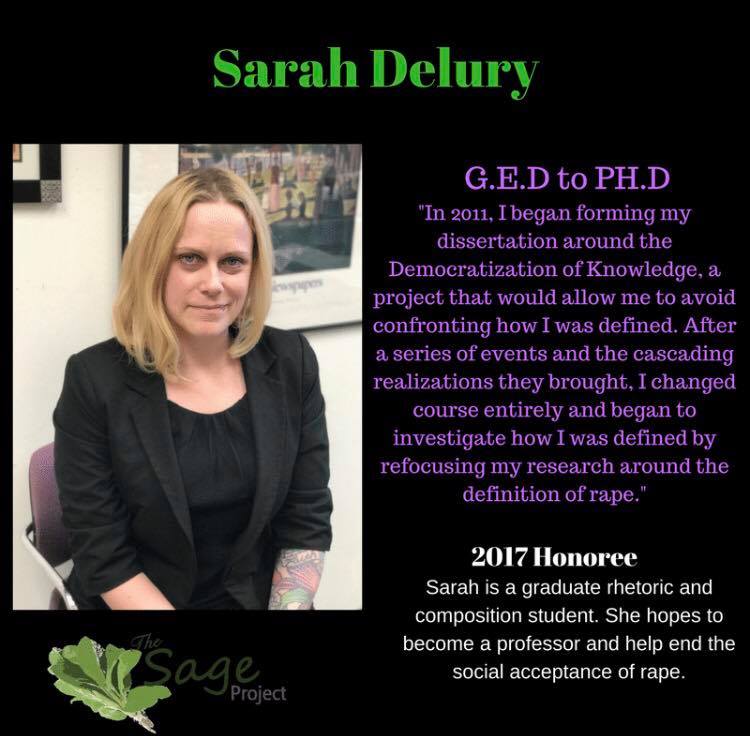 For a long time, Sarah DeLury believed rape defined her, but in pursuing a doctoral degree in Literacy, Rhetoric, and Social Practice and creating a dissertation on the Rhetoric of Rape, she discovered how to truly define herself. After finding a community and joining the “rhythmic cacophony” of a choir of voices, she found she no longer had to scream as loudly to be heard. She finally understood where she was going, why she was going there, and what she needed to do to arrive at her destination.

DeLury did not always have such a clear life direction, though; in fact, after attending twenty two different schools throughout her childhood, she dropped out of high school during tenth grade. She did not have a proclivity for school or a passion for learning until the age of 23, when she “looked in her bushel of thoughts and it was empty,” so she obtained her G.E.D. and started college.

About her educational transformation, DeLury said the following: “I never could have imagined that through seeking knowledge, I would find myself piece by piece; that through gaining an education, I would find a career as an educator.” And while DeLury does currently teach classes at Kent State as part of her doctoral program, her goals of attaining a full-time position as a professor remains. She wants to be in the classroom interacting with students and inspiring a love for education in others—not working in a research facility. She hopes to use her experience as a survivor of rape to advocate, educate, and empathize with others.

Sarah DeLury’s advice for others going through trying times is to “confront limitations, in knowing, doing, feeling, believing… confront that which is the most uncomfortable, the most loathsome, and eventually, limitations will diminish while you grow past them.” She has conquered her own adversity and turned it into something which motivates her to succeed; “Fear accompanies me wherever I go…eventually, this omnipresent shadow pisses me off enough that I have to confront it somehow. It motivates me, silently in some ways, a cacophony in others, to continue on, if for nothing else, then to find enough momentary light to diminish the shadows.”

DeLury could not have become the confident, well-spoken, humorous and eloquent woman she is without the support of people like Mary Hovanec (Professor, Cuyahoga Community College), her friends, Dr. Colleen Thorndike (University of Mississippi), Chelsea Swick-Higgins (Kent State University), Angeline James (Cuyahoga County Public Library), her student, Carolina Echevarria (Kent State), and her Grandmother, Geraldine Abeel. These people have been particularly influential and helpful for DeLury, as she felt she had little to no support as a child; she aimed to be the support she never had growing up, and after having such amazing role models later in life, she is surely going to succeed in doing so.