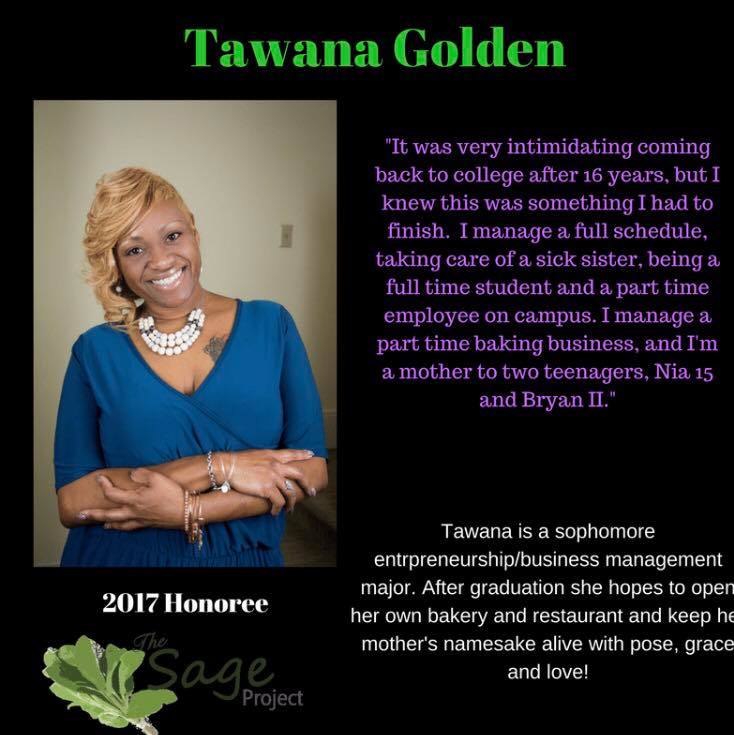 Tawana Golden, who describes herself as shy and cautious, has commanded her life with perseverance, determination, and tenacity.  As a non-traditional student, Tawana took a leap of faith and returned to school to better herself for her children, her mother, and more importantly herself.  She has faced down adversity and has come back ten times stronger, and she has credited her success to her family and above all her faith.

After being let go from her long-term job, Tawana was at a crossroad in her life.  She was raising two teenage children, taking care of an ailing sister, and struggling to pay the bills.  Instead of crumbling under the pressure, Tawana decided the best decision for her family would be to return to school.  She knew that starting her journey as a full-time student would not be easy, but chasing her dreams in order to successfully support her family would outweigh any hardships.

On her return to college, her confidence started to build.  She found her perfect major with Integrated Studies, blending Conflict Management, Entrepreneurship, and Hospitality together to create the seamless skills to start her own business—which she did.  Tawana opened her part-time baking business ‘One of Pearl’z Girlz’ which pushed her even more to get through school. Tawana was on the path of well-earned success, but that did not take away the difficulties of being away from her children and working her other part-time job in the Office of Student Financial Aid.  The one motivating factor getting her through everything was the notion that she could succeed in her goals by showing love and never giving up.

Tawana’s favorite phrase to describe herself is, “I refuse to give up”.  When times became hard, Tawana refused to give up.  She has pushed through.  Coming back to school, she said, “Showed a lot about me. It showed the courage and tenacity I had because I was intimidated and nervous at first”.  She can only hope that by her doing this she can inspire her children and other students to do the same.  She has the following advice for other students: “you can always reach your goals no matter the circumstances”, something that has allowed Tawana to get to this point in her life.

The journey has not been easy, but it has been a journey of perseverance. Tawana has not been able to do it on her own.  One person who has helped her navigate the journey is Sandra Anderson, the director of the LIFE program at Kent State.   Anderson is Tawana’s Academic Advisor, but she has played more of a role than her title states.  She has been the one opening doors and directing Tawana to new opportunities.  Tawana even says that without Anderson, she would have never heard of her major and the opportunities combining three concentration fields would do for her.  However, Tawana also says that it is Kent State University as a whole that has given her ample support through her time here.  She says that the support and diversity Kent State offers—especially to single parents—is endless and topnotch.  Without that extra help from the university, Tawana says she would not know where she would be now.

Tawana Golden might have started her journey here at Kent State shy, timid, and cautious, but she is leaving bold, strong, and courageous.  There is nothing that will stop Tawana.  She will refuse to give up, and one day you will see her on the Food Network with her brand plastered everywhere.  Hers might have been an untraditional journey, but it is a journey not worth changing.