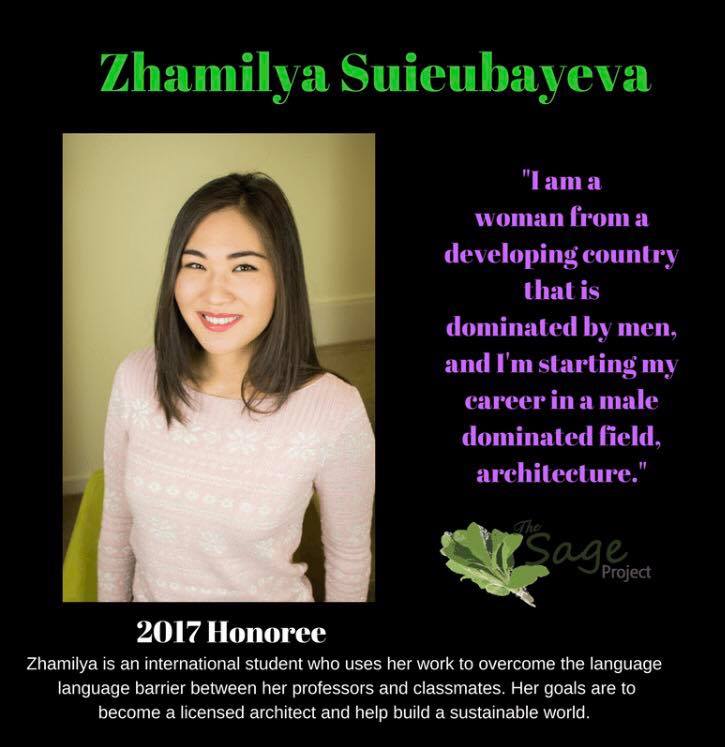 The American Dream is the pinnacle of the dreamers, believers, and founders who created the principles of the United States, a nation founded on the ideals of opportunities, acceptance, and being equal.  Scholars and individuals alike have said that the toughest obstacle to overcome is leaving a place one called home to travel through uncharted waters to become someone in a new place.  At 18 years, old Zhamilya Suieubayeva did just that.  She has defied all obstacles in order to become successful in her field, her life, and in the classroom.

Motivation never runs short for Zhamilya Suieubayeva.  She has found a passion that drives her to work hard, but it is her story that drives her even more. Zhamilya is a woman from a developing country dominated by men.  She is also an architecture student, a male-dominated field.  Zhamilya does not view these as obstacles, however; she views these as “motivators”,  motivators that she has learned to overcome with patience and persistence.  She says that each gender has strengths and weaknesses, but those should never stop a person from succeeding.        When Zhamilya started her time here at Kent State, she said the hardest difficulty to overcome was the language barrier.  She could not fully convey her thoughts and ideas which made her ability to communicate with her classmates and instructors challenging.  To some, this would be the moment that would make them question if the right decision was made, if being successful could ever happen, but for Zhamilya it gave her a new goal.  She learned that language is not one sided, but shown in various ways, and her way just needed to be discovered.  That is when Zhamilya started putting her heart, passion, and ability into her work.  She continued to grow and was able to start ‘speaking’ through her designs and drawings.  This allowed people to get to know her, know her style, and know her ability.  She began to be able to make friends and connections through her projects and designs, making her decision to come to the United State for school worth it.

It is the significant moments in life that shape the person you will become.  For Zhamilya, that was moving to the US.  She says that making this immense change and decision “changed her way of thinking”.  Where she is from, it is instilled at a young age that the most important thing for a woman to be is a mother and wife: to stay home, take care of the family and let the man provide.  However, coming to the US and studying at Kent State, Zhamilya said she has learned that as a woman it is okay to want a career, to have goals, and also still want a family.  She said that in the US you can do it all and you are not shamed for wanting more.  Zhamilya also keeps pushing past the obstacles to make her mother proud.  She said that her mom always tells her, “Don’t tell me you can’t do something, because you can do anything”. These words have resonated with Zhamilya and given her the patience and work ethic to be top in her program and represent her college as a USG senator.

Overcoming different matters is never easy, but doing it with a cultural and language barrier is even more difficult.  That is why Zhamilya Suieubayeva is well-suited for this honor.  When looking back, Zhamilya says the process has not been easy, but chasing that ever so sought after American Dream has been well worth it.  Zhamilya also wishes for other students in her situation to “not spend time complaining of what you cannot do, but spend your time overcoming the obstacle. Going forward, keep working, and stop thinking of what you do not have. That is when you will start to see success”.  Zhamilya Suieubayeva is a woman on the move and a woman bound to change the world around her.