The Associated Collegiate Press “promotes the standards and ethics of good journalism” and recognizes these media practices at its yearly conference. Kent State Student Media made an impact at the 2021 conference, winning three awards: two first place and one honorable mention.

Preston Randall, senior visual communication design major, received first place in the “Design of the Year/Illustration” category with his piece “Until We Can Handshake Again.”

“I produced (this piece) for The Burr Magazine in the Spring of 2021 for an article that explored the difficulties caused by the pandemic and faced by journalists in the performance of their work,” Randall said. “I decided to illustrate this by depicting an erupting volcano with a reporter attempting to perform an interview in the midst of the eruption’s chaotic power.” 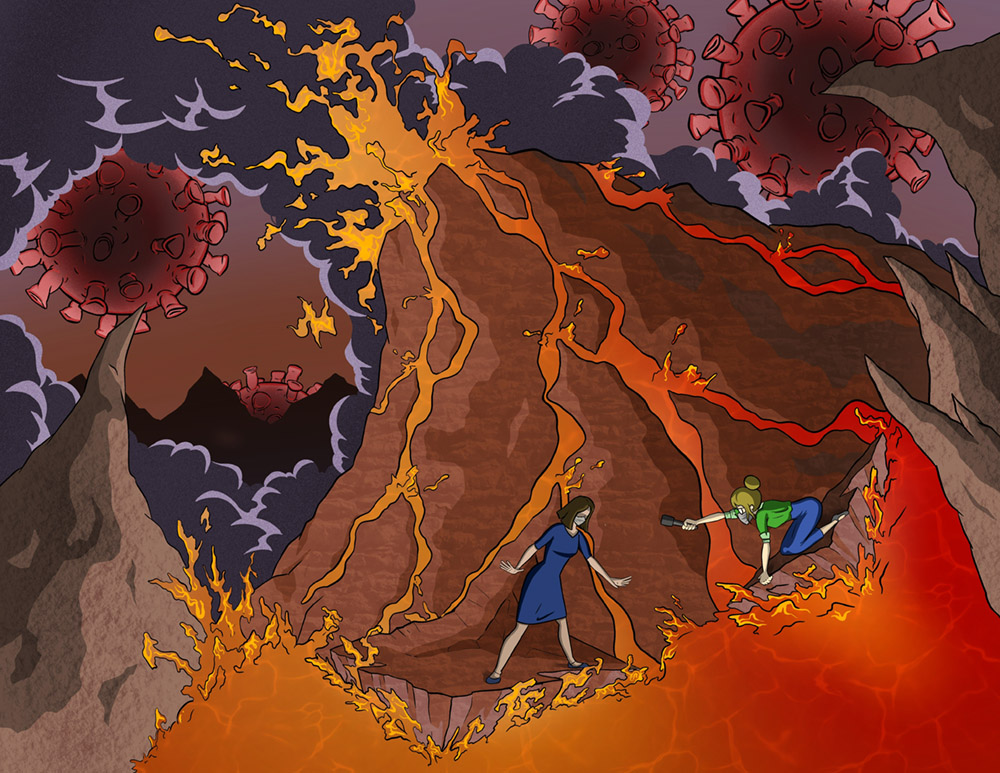 In reflection of his accomplishment, Randall recognized some challenges he faced when creating his winning piece.

“The magma and the people were definitely the areas I remember working on the most. It was difficult for me at the time to get the popping and viscous look of the magma right and the shape of the splashes took some trial and error,” Randall said.

“I completed this package for my advanced broadcast reporting class my junior year. I fine-tuned it a little bit this semester before sending it in,” DaPra said. “It was a really cool story because Carrie Esser (makeup guru) is a local sensation who is really making a brand for herself.”

DaPra is now a news reporter at WTOV9 in the Ohio Valley.

"I stayed local to really hone-in on my skills and learn all parts of a newsroom,” DaPra said.

She remains thankful for the student media program at Kent State for preparing her for her career.

“We are very fortunate at Kent State to have such a tight run news station andteachers who truly care about our journalism students,” DaPra said. “Without those two things, I feel like I wouldn’t know what I want to do in my journalism career. They are hands on and individually help you with anything you need.”

Graduate student Lyndsey Brennan was also recognized at the ACP conference in the category “Online: News or Features,” receiving honorable mention for her piece “2021 COVID-19 Coverage.”

Kevin Dilley, Director of Student Media at Kent State, is proud of his students’ accomplishments, but stays committed to keeping creativity at the core of what all Student Media workers do, regardless of whether or not they win awards.

“We encourage students to create content in the way they think is the best. We don’t worry about awards at that point. However, we enter the best student work in as many contests as possible because it’s good for the students and Student Media,” Dilley said. “The students get to list awards won on their resumes, and for incoming students to Student Media, they can see the national awards and know right away that the expectations are set high for professional quality work in Student Media.”