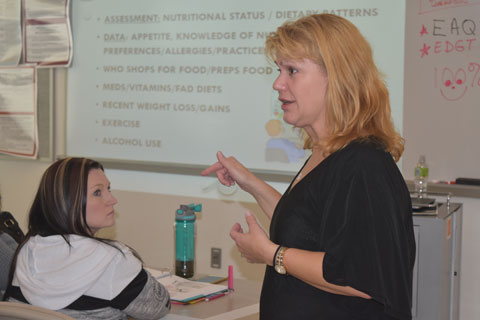 Three recipients will be awarded this year on Friday, October 21, 2016.

Monday, November 14, 2022 - 2:01pm
Shellie Warino of the Salem Campus was named to the Joint Review Committee on Education in Radiologic Technology (JRCERT) for a three-year term beginning in 2023.

Tuesday, October 11, 2022 - 4:15pm
Greetings! Since early August, I’ve been filling the role as interim dean and chief administrative officer for the Kent State Columbiana County Campuses and learning to navigate between the two campuses, as well as with my home campus in Tuscarawas County. I’ve been welcomed in s...

Tuesday, September 13, 2022 - 9:18am
Faculty and students from the associate degree in nursing program at Kent State East Liverpool volunteered during the recent Canfield Fair by conducting free blood pressure screenings at a booth sponsored by the Ohio Nurses Association, District Three, in the fair’s Medical Build...

Tuesday, August 30, 2022 - 10:49am
Kent State at Salem held its summer nursing convocation and pinning ceremony during which students received their nursing pins and recited the nursing pledge. All are receiving degrees this year through the Bachelor of Science in Nursing (BSN) program on the Salem Campus.

Monday, July 25, 2022 - 3:53pm
Kent State University at East Liverpool held its annual nursing pinning ceremony May 15, during which 36 students were recognized for receiving degrees through the associate degree in nursing (ADN) program.

Tuesday, June 14, 2022 - 11:42am
Dr. David Dees, dean of Kent State University at East Liverpool, announced those students named to the Spring 2022 President’s or Dean’s lists. To qualify for the President’s List, students must have a 4.0 grade point average and must have completed 15 or more credit hours during...

Monday, June 13, 2022 - 4:48pm
Dr. David Dees, dean of Kent State University at Salem, announced those students named to the Spring 2022 President’s and Dean’s lists. To qualify for the President’s List, students must have a 4.0 grade point average and must have completed 15 hours during the semester. To quali...