Kendra Snatchko is about to graduate from Kent State University and her eyes are focused on a bright future. Her vision of the future, however, started forming when she was only 12 years old.

That’s when she set her sights on someday working in the fashion world.

Snatchko will graduate in May with a degree in fashion merchandising and a minor in fashion media from Kent State. She began her collegiate pursuit on the East Liverpool Campus during the fall 2014 semester and transferred to Kent in the spring of 2016.

She recently spent three months in New York City, as part of her program requirements, and is much closer to reaching those goals she set so long ago. 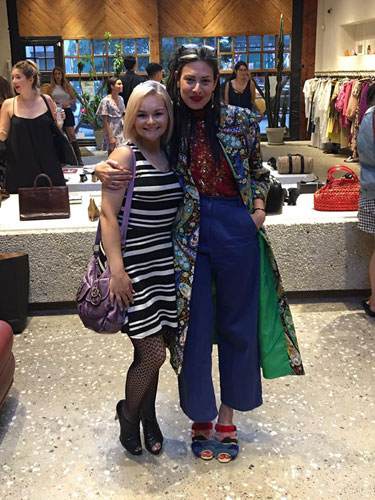 “It sounds like one of those corny inspirational stories, but what encouraged me to pursue a career in fashion was a dramatic weight loss event when I was in middle school,” she shared.

“I grew up on a racehorse farm and was raised a total tomboy. I was always on the ‘chunky’ side and when I was 11 years old, we found out I was diabetic. Once I was put on the correct medications, I dropped roughly 30 pounds in one summer. That, in my opinion, was a checkpoint for an 11-year-old.”

During that same summer, Snatchko said that she cut 15 inches of her hair and began embracing the changes that were happening to her. Like a lot of preteens, she spent time watching television and the show “What Not to Wear” became one of her favorites.

“Once this big change happened to me and I started watching this show, I learned how to dress my new body and what it meant to have self-esteem,” Snatchko said. “Once I learned how to achieve those things, I wanted everyone else to feel as great as I did. And, now I’m doing it. I decided on pursuing a career in fashion at the age of 12.”

Snatchko was required to complete an internship for her program and she knew she was headed for New York City. “I’d dreamed of NYC since my shining realization when I was 12, so I knew I would go,” she said.

At Work in the City

While in New York, Snatchko interned for Rachel Lynch, a fashion blogger in Soho (Southern Manhattan), who maintains the blog, “I Hate Blonde,” that she launched in 2009.

“Working with Rachel, I had the opportunity to see the inside-looking-out aspect of the blogger lifestyle,” Snatchko explained. “Bloggers typically make a career by doing freelance brand representation. Rachel collaborates with fashion brands that may be off the radar from what the typical person would consider ‘in style’ or fashionable, or brands that just want more exposure online. When those brands get exposure through channels like bloggers, they become more recognized to their targeted audience.”

Through her internship, she learned Lynch’s photography methods, editing style and how Lynch grew her audience as an “influencer.” She also managed Lynch’s brand collaboration list and helped gather background information on brands.

While in New York City, Snatchko also took two classes at the Kent State NYC Studio. The first, “Fashion in the Media,” taught the history of media in the fashion industry and how the needs for different mediums have changed through the years. At the end of that class, the students produced an online magazine, for which Snatchko wrote the featured article and was named executive editor in the masthead.

The second class, “NYC Study Tour,” was required for the NYC study abroad group. The class met at two locations every week and toured various fashion-related companies, including Cotton Inc., the Met and Mood Fabrics (the main fabric store featured on “Project Runway”).

“Some of the businesses were casual, some were strictly business,” she noted, “but the tours opened doors to the cool spots in New York City for fashion-focused people. Some of my greatest experiences happened in the streets of New York. There are no rules there. It’s something you can only understand with your own eyes and an open mind.”

To prepare for her stint in New York City, Snatchko took a one week “test trip” over last year’s spring break. Growing up in New Cumberland, W.Va., she was well aware of the differences between the two towns, but she had yet to experience it.

“It helped me learn my surroundings and get a feel for the vibe of the city,” she said. “I believe ‘awed’ would be the best term to describe my reaction. It was everything I’d expected. You might think noise and tall buildings, and way too many people, would be boring, but it helps put things into perspective regarding your place in life.” 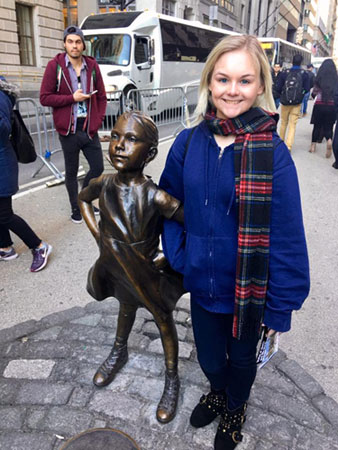 During the three months Snatchko spent away for her internship, she lived with her oldest brother in northern Manhattan (Washington Heights).

“Washington Heights is what we would probably consider the area where you’d want to raise a family and own a dog. It has a neighborhood vibe and a lot of parks, which I enjoyed.”

Snatchko explained that her brother graduated from NYU in 1998, when she was 3 years old, and; therefore, was well prepared to be her guide and help her learn her way through the city.

“He cleared out a corner of his living room and let me set up a mini bedroom, for which I will be forever thankful, because rent in NYC would have prevented me from being able to be there.”

Now that she’s had an up-close look at the fashion scene in New York City, Snatchko can certainly picture herself fulfilling her dream and exploring all options.

“My passions lie in the umbrella topic of brand management,” she explained. “I love things such as media (specifically photography) and customer experience management. One thing driving the industry right now is that people want to spend their money on experiences, so the demand for jobs in that one sector is definitely thriving.

Not long after finishing her internship, Snatchko started her own photography blog on Instagram (@thevelvetblade) and launched a website (thevelvetblade.myportfolio.com).

Looking back, Snatchko admitted that – like many other young adults – she wanted “terribly to get away from the Ohio Valley after graduating high school” in 2014. During her senior year at Oak Glen High School, however, her mother suffered a brain aneurysm and Snatchko decided to stay home and enroll at Kent State’s East Liverpool Campus.

She completed all but one of her core classes at Kent East Liverpool, but, to study fashion, she had to continue classes at the Kent Campus. By that time, her mother had recovered enough that Snatchko felt comfortable leaving home. 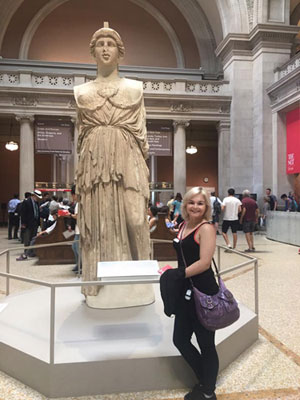 “Kent State East Liverpool gives local high school grads the opportunity to figure themselves out, at a pace that is appropriate,” she shared. “I think it’s wise to spend your first year contemplating a major, while still getting core classes. Kent State allows you to test yourself – if you choose to do so.

“There were moments when I questioned myself,” she continued, “but that was because, thankfully, my professors asked more from me. Kent can be a home away from home if you choose to make it that way. It’s the right place to be to find out who you should be. But, it’s your job to make it happen.

“My advice to incoming freshmen or current underclassmen would be this: when it comes to choosing a career, do not just pick something you’re passionate about. You should pick something you could never NOT see yourself doing, and do it.”

And, speaking of jobs, Snatchko is already looking to the future and planning a career following graduation in May.

“(Eventually), I would like to see myself comfortably seated in a corporate position, preferably in the branding department of a company I can stand behind,” she said. “The dream company would be something concerning the accessories or undergarment market. Ironically, I wouldn’t mind staying local to be closer to my family.”

On her last night in New York City, Snatchko was reminded of how her dream of working in the fashion world began when she was a pre-teen, watching television and learning how to put together stylish outfits. On the eve of her return trip home, Snatchko got to meet Stacy London, the host of “What Not to Wear.”

“She (London) was co-hosting an event four blocks from where I worked in Soho and I got to meet her! That was a dream I set for myself at age 12,” Snatchko said. “It took a full decade to get there, but, if you want something bad enough, the universe throws you a bone eventually.”

Photo A:
Kendra Snatchko (left) with Stacy London from TLC’s “What Not to Wear”