From Ashtabula to the New Titletown, Alumna Cara Hudak '16 is in her Field of Dreams 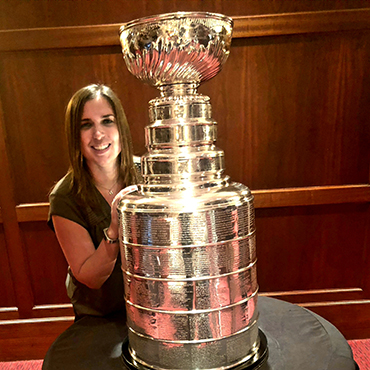 With three major sports championships in the past two calendar years, one could easily argue that our nation’s capital is becoming the country’s new “title town.”  The NHL’s Washington Capitals (2018 Stanley Cup), the WNBA’s Washington Mystics (2019 Finals) and, most recently, Major League Baseball’s Washington Nationals (2019 World Series) have all recently hoisted world championship trophies, and Kent State University at Ashtabula graduate Cara Hudak ’16 has had one of the best seats in the house to enjoy those title runs.

Hudak, a Cuyahoga Falls native and Hospitality Management program alumna, is in her second year as the Suites Sales Manager for Aramark at Capitol One Arena in Washington, D.C., home of the Capitals and the NBA’s Washington Wizards, and has been on the Washington sports scene for almost four years after starting her career with the hometown teams in Northeast Ohio.

While she has seemingly found the industry that’s right for her in a field she loves, Hudak initially came to this career path almost by accident.

“I was originally studying another major at an out-of-state school and came home after my first year looking for a summer job,” she said.  “I found an entry level position with Delaware North Sportservice at Progressive Field that summer and it was the management team there that steered me toward hospitality management.”

“I attribute most of my growth to my studies at Kent State Ashtabula. Not only did obtaining a degree prove my determination to advance my career, I was also able to study and develop skills from amazing professors that I still utilize every day." - Cara Hudak '16

She made the decision to relocate back to Northeast Ohio to pursue hospitality management as both an academic program and potential career.  Her search led her to Kent State, where several family members had attended, and its acclaimed hospitality management program.  The accessibility, affordability and accommodating nature of the campus made Kent State Ashtabula an ideal choice to continue her education while also working to further her career in the industry. 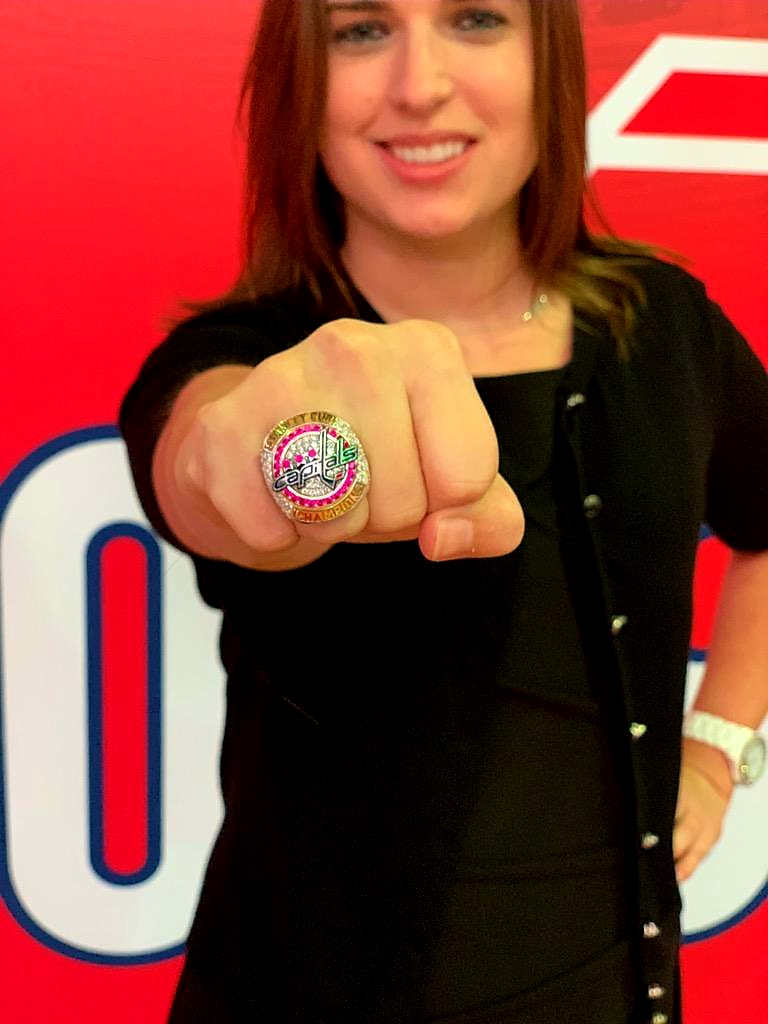 “I was very fortunate to move up rather quickly with Delaware North, and then Aramark at FirstEnergy Stadium and Quicken Loans Arena (now Rocket Mortgage FieldHouse), even while I was still in school working on my degree,” Hudak said. “Everyone at Kent State Ashtabula was so incredibly helpful; I don’t know how I would have graduated without the amazing support of the faculty. I was working long hours and often traveled to other properties in the country for support during big events.  All of my professors were extremely accommodating and excited about what I was doing.”

She continues, “I attribute most of my growth to my studies at Kent State Ashtabula. Not only did obtaining a degree prove my determination to advance my career, I was also able to study and develop skills from amazing professors that I still utilize every day: market research, menu planning, resume writing, interview techniques, critical thinking, ethical issues, and so much more.”

Hudak started as a suite runner that first summer during Cleveland Indians’ games before being promoted the following season to a suite supervisor position.  She then joined the suites teams for Cleveland Browns and Cleveland Cavaliers games, as well as concerts and other arena events, working year-round and rotating between all three properties in Downtown Cleveland.  She was also able to complete an internship with Delaware North to fulfill her practicum requirement.

“Cara was such a good, conscientious student who worked hard to accelerate her career by taking advantages of all the resources and connections available to her,” said Scot Tribuzi, Ph.D., a senior lecturer in the hospitality management program. “She was able to share the real life experiences from her work in the field in the classroom and put herself in position to receive an outstanding job opportunity before she graduated.”

After graduating with her bachelor’s degree in 2016, Hudak went to work for Marriott for two years, expanding her knowledge and adding to her skill set in the areas of hosting and catering.  But, she knew that wasn’t where her true passions lied.

“Marriott was truly a great place to learn and train, but I knew my heart wasn’t set in that area,” Hudak recalls. “I knew I wanted to be back in the sports world soon.”

She then took her first management position with Levy Restaurants, the firm that handles culinary and banquet services at Nationals Park.  Holding the title of Senior Banquet Manager at age 23 seemed like a daunting task, but she was up to the challenge and ultimately was recruited across town by a former employer, Aramark, which had recently won a decade-plus contract for operation rights at Capitol One Arena and placed her in her current role ahead of the Capitals’ history-making Stanley Cup run.  She returned to Levy this past October to put her championship experience to use and provide assistance during the Fall Classic and the Nationals' improbable World Series victory.

“Cara was such a good, conscientious student who worked hard to accelerate her career by taking advantages of all the resources and connections available to her. She was able to share the real life experiences from her work in the field in the classroom and put herself in position to receive an outstanding job opportunity before she graduated.” - Scot Tribuzi, Ph.D., a senior lecturer 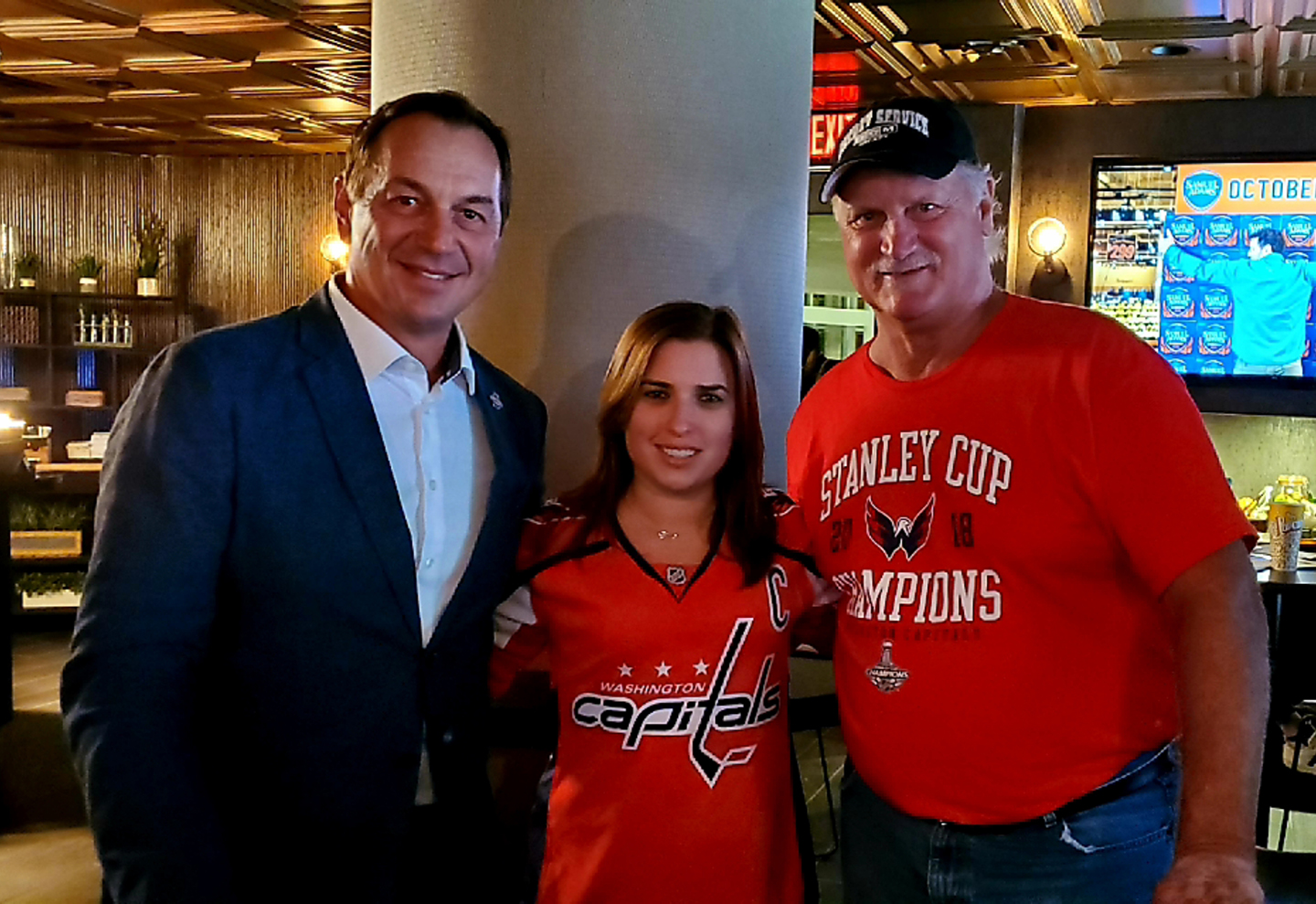 “I’ve had the honor of working some of the biggest events in the country and with some of the most interesting and influential people,” she says about her career to date. “I have seen College Game Day, Stanley Cup Finals, World Series, March Madness, All-Star games and multiple playoff games. I’ve been a part of dozens of concerts and events that I never would have had the opportunity to attend otherwise. It’s an amazing experience and I couldn’t imagine ever giving it up.”

“And there are so many companies like mine, eager to hire students in this field and have them grow with the company,” she added. “Explore it, give it a try! Many students enter Hospitality Management to be a wedding planner or restaurant manager; I feel this niche of the industry needs more attention. There are multiple companies like mine with hundreds of different divisions and thousands of different positions. It is a great industry to get in early, find your best fit, and work your way up.”

After a couple years, Hudak is settling in and looking to make the D.C. area her permanent home.  While she loves her current role, she is cognizant of other opportunities that could lie ahead of her.

“I would like to expand my sales role here and take on a director level and hopefully oversee multiple properties,” she said. “Aramark has some wonderful opportunities at the corporate level that would also allow me to use more of my creative side and implement trainings and procedures at other properties. I have a few paths I could explore from here, but I am excited to see where this could lead in the next few years!”