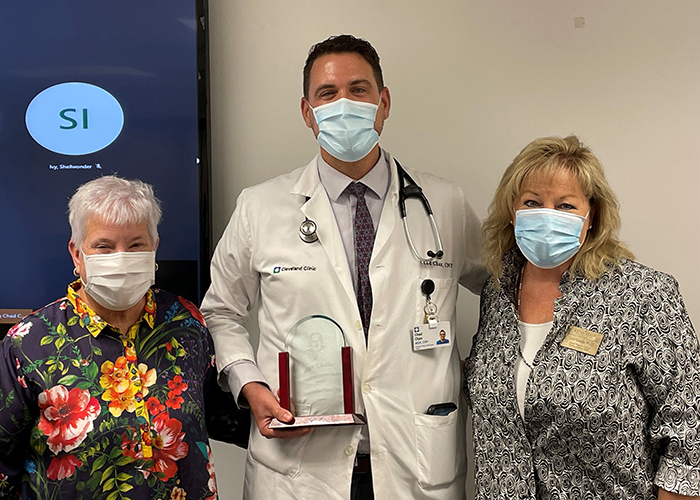 ““I’m so proud of Chad. He’s really grown as a person and a nurse,” said Stocker. “It was very clear when we presented the award to him on the unit he works on at Cleveland Clinic, that he is respected by the physicians for his knowledge and skills and also admired by his co-workers as a caring nurse and colleague.”

After admittedly struggling with his studies at first, Hollis-Chan became a dedicated student who ultimately went on to earn a bachelor’s degree in nursing from Cleveland State University in 2009 before returning to the Kent State system to earn his master’s degree in 2012.

“I had a rocky start, but I knew if I was going to make something of myself, I needed to make some changes,” he said.  “It took a lot of work, but once I was on that path to becoming a nurse, the rest was easy.”

“Even though, throughout my college experiences, the nursing classes at Kent State Ashtabula were by far the toughest,” he joked.  “They provided a great foundation to build my career upon.”

Hollis-Chan began his professional career as a staff nurse right after graduating from Kent State Ashtabula and has been at Cleveland Clinic since 2006.  He first started in vascular surgery before moving to internal medicine in 2016.  When he went to graduate school after graduating with honors from CSU, Hollis-Chan began working as a clinical instructor for the Kent State Ashtabula ADN program, calling it “an amazing experience to be able to work with students back where it all started for me.” He also served as a part-time instructor for the CSU School of Nursing.

Hollis-Chan lives in Cleveland with his husband and daughter.

About The Award
The Roger T. Beitler Distinguished Former Student Award is named for Roger T. Beitler, the first director of the Ashtabula Academic Center from 1958-1963, who laid the firm foundation upon which the Kent State University at Ashtabula Campus has continued to build. To honor his memory and dedication to faculty and students, the Ashtabula Campus Faculty Council established the Roger T. Beitler Distinguished Former Student Award. It has been given annually since 1980 to former students who have made notable contributions in their respective vocations.