Kent State University at Ashtabula Dean and Chief Administrative Officer Susan J. Stocker, Ph.D., was presented with the Marta K. Stone Excellence in Leadership Award from LEADERship Ashtabula County at the organization’s annual meeting Wednesday, Aug. 1. The Leadership in Excellence award recognizes community leaders who demonstrate a unique ability to guide and inspire others, which in turn contributes to the growth of the Community.

“The term leader isn’t really a title, it’s really just a name,” said Laura E. Jones, LEADERship Ashtabula County executive director, who presented the award. “A leader is someone who exemplifies every characteristic:  ethics, values, they stand behind what they are going to do. They really listen and set an example to everyone in front of them. Susan Stocker is just that. How she is viewed and seen as a mentor to so many people in this community conveys leadership.  The goals set by her are met, are achieved and are exceeded.”

“People take on leadership roles for many different reasons - some do it to pad resumes, to network or to follow their own agenda,” Stocker said. “My reason for serving in leadership roles in the community is simply to make a difference.” 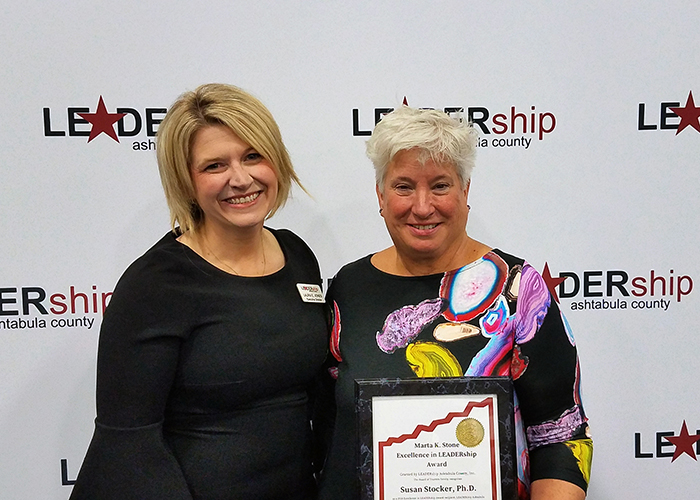 Appointed to her current position in 2001, Stocker is the longest tenured dean in the Kent State system. Locally she is the only woman to have served as President of Growth Partnership for Ashtabula County and is a past chairperson of the Ashtabula County Medical Center Board of Trustees.

Stocker was the driving force behind the capital campaign that raised over $6 million locally to help finance the Robert S. Morrison Health and Science Building (now Robert S. Morrison Hall), which opened its doors in 2009.  In addition to that state-of-the-art facility, Stocker has also overseen a number of capital improvement projects in recent years including the opening of a new bookstore and business services building; an updated Commons and new student lounge, Academic Affairs and Student Services offices and A-wing classrooms in Main Hall; and most recently the resurfacing of all parking areas and new grand entrance into the heart of campus, complete in the summer of 2016.

“Her vision to grow the campus and her ability to rally the community and embark upon projects are incredible and are all things guided by her values and leadership,” said Jones.

She served as president of the Ohio Nurses Association from 1997-2001 and has filled interim roles within the Kent State system as dean and chief administrative officer of the Geauga campus and Regional Academic Center, dean of the Regional College and the College of Nursing.

Acknowledged as the Kent State Ashtabula 50 Years of Nursing Excellence Distinguished Alumni Award honoree in recognition of her contributions to the field of nursing and nursing education, Stocker is the recipient of numerous honors: she was inducted into the Madison High School Alumni Hall of Fame in 2007, was honored as the Roger T. Beitler Distinguished Former Student award for the Ashtabula Campus of Kent State, received the President's Award from Growth Partnership for Ashtabula County, and was the first faculty member on the Ashtabula campus to receive the prestigious Kent State University Alumni Association Distinguished Teaching Award.

“I have learned leadership is something we practice. Sometimes we get it right, sometimes we don’t – it’s so complex,” said Stocker. “It takes a collective vision. Leaders must be authentic and value-based, and never forfeit integrity. Being a leader takes courage. Leadership matters.

“I have learned leadership is something we practice. Sometimes we get it right, sometimes we don’t – it’s so complex,” said Stocker. “It takes a collective vision. Leaders must be authentic and value-based, and never forfeit integrity. Being a leader takes courage. Leadership matters.

“Thank you to my family, my coworkers at Kent State Ashtabula, the Ashtabula Area College Committee, our community for their continued support and LEADERship Ashtabula for this wonderful honor.”