A team of Kent State Ashtabula Respiratory Therapy Technology students recently put their knowledge to the test and had an impressive showing in the "Sputum Bowl" team quiz competition at the Ohio Society for Respiratory Care annual conference.  The team of second-year RTT students Dawn Fishel (captain), Makenna Hudson and Lyndsey Wheeler reached the semifinals and ultimately finished third in the state-wide event in Columbus on July 27. 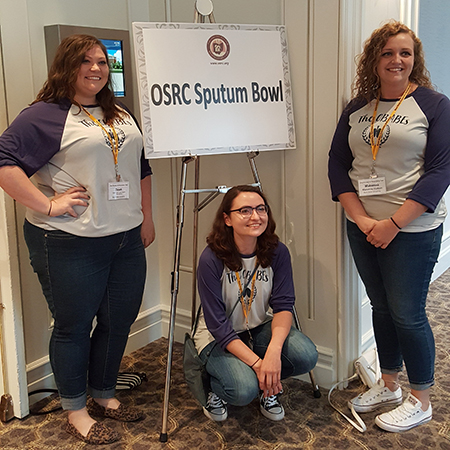 A Sputum Bowl team consists of three people sitting at a table, with another team of three seated nearby at their own table. Both teams listen closely when the question reader verbally calls out a question concerning some aspect of respiratory care. The team that buzzes in first has 10 seconds to answer correctly and score a point. At the end of 10 minutes, the team with the most points wins.  The Sputum Bowl has been part of the American Association for Respiratory Care's national conference every year since the late 1970's, with the winners at state-wide conferences advancing to the national stage.

This was the group's first time appearing in the tournament.  The "CBABEs" (Chronic Bronchitis, Bronchiectasis, Asthma, Cystic Fibrosis, Emphysema) advanced through the preliminary rounds to reach the championship levels before falling in the semifinals. There they dropped a competitive match to Youngstown State University, the team that represented Ohio at the national conference student-sponsored tournament last year.  In that round, teams assemble a pool of potential "lifelines" or a "phone a friend" bank to assist with tough questions. The Kent State Ashtabula group was comprised of instructors, clinical partners and program alumni.

"They had a lot of fun and they really learned a lot from this competition," said Respiratory Therapy Director of Clinical Education Amy Rodenhausen, the club advisor. "They represented the school and program really well and really made a lasting impression on the judges."