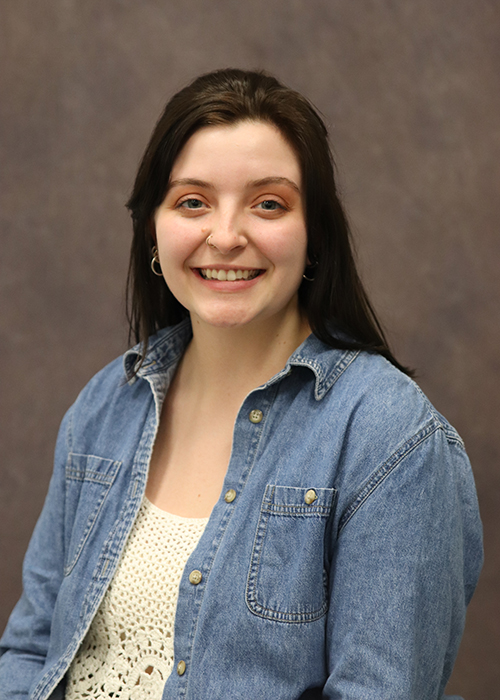 Kent State University at Ashtabula senior Jesseca Housel was recently honored as the 2021 Outstanding Sociology and Criminology & Justice Studies Senior Award recipient.  A third-year student, Housel’s nomination was selected from hundreds of students in the Department of Sociology throughout the Kent State system. She was presented the award virtually during a recent departmental awards banquet.

“It’s such a nice honor and very rewarding; it makes me feel good about the effort that I’ve put into my education,” she said.  “Part of the award is intelligence related, but I could not have achieved such academic success without the time, effort and continuous support and mentoring of my professors.”

Housel was nominated by three faculty members – senior lecturer Marna Drum, lecturer Richard Dana and instructor Jake Jones. Housel mentioned the influence all three have had in her academic career, along with Associate Professor Jessica Leveto, Ph.D. (Sociology) and David Perusek, Ph.D. (Anthropology). In her nomination, Drum was effusive with her praise.

“There are some students you know are special, right from the start.  Jesseca is one of them,” Drum said in her nomination letter.  “Her enthusiasm for knowledge is infectious. Her work ethic can’t be beat. She provides great attention to detail and is dedicated to learning in general. I would say that Jesseca is a natural leader. Her fellow classmates rely on her for everything from moral support to helping them with their homework and assignments.”

The Jefferson, Ohio, native and 2018 Jefferson Area High School graduate started her college career while still in high school as part of the College Credit Plus program.  And, despite her young age, she made an impression on her faculty immediately.

“I’ve known Jesseca since she began her college career,” Drum said.  “Jesseca has been an excellent student and a pleasure to have in the classroom. I do not come across students like her too often, so when it happens, I really get excited. I would say she is in the top 1% of the students I have had.”

As class valedictorian, Housel had several scholarship opportunities from schools across the country, and while in high school originally had her sights set beyond the borders of her home community.  But, once on campus, she knew she had could play a huge part in the lives of others. She had found her place, her passion and her purpose.

“My biggest focus in high school was on graduating, and I really thought I would be the valedictorian that went off to Harvard, Ohio State or a big school like that and studied prosthetic engineering or something crazy like that,” said Housel.  “But my interest waned from those really big ideas, and I thought at first maybe I’d stay for a year or two and then go on. But when I got here, I wanted to stay. Nothing could get me to move from here. The small classes made for most engaging conversations. There were opportunities for community involvement with things that really excited me and that I wanted to focus more on.  I have had professors who have been so helpful, who have engaged with me, challenged me to think, and inspired me to do more.

“I’m very happy life took me here, and I recommend Kent State Ashtabula to just about anyone with whom I talk.”

“The opportunities that have come from being involved with Rising Scholars are incredible,” Housel said.” It took pressure off my shoulders with the tuition scholarship and a job that was flexible, but more importantly, I was able to work with students in my area of concentration and be someone they can look up to and talk to about their progress. It’s been so fun and rewarding with them. They’ve become such a big part of my life.  It’s going to be sad to not talk with them nearly every day, but it was very interesting being there from the beginning and growing with the program.  I can’t wait to hear from mentors in the future, how they will grow with the students from year-to-year, and seeing the students grow so much.”

“Jesseca is exceptional in every way because she puts her heart and 100% into everything she does,” said Huya.  “She lives at such a high level of excellence that everyone who has the privilege of knowing her is elevated.  The Rising Scholars program has soared because of her leadership, determination, and commitment. Jesseca truly is exceptional.  I am so blessed to have had the pleasure of working with her.”

In addition to Rising Scholars, Housel has been involved with both the Justice Club and Sociology Club; works as a peer coach and tutor in the Kent State Ashtabula Writing Center; serves meals at the Ashtabula Dream Center; has participated in fundraising efforts on behalf of the American Cancer Society, Homesafe, Inc., and other area nonprofit agencies and scholarships; has been a dedicated 4-H camp counselor and volunteer; and also volunteers time to work with the Ohio Teen Institute (OTI) in an effort to return the program to Ashtabula County.

Once she graduates this summer, Housel plans to both attend graduate school to earn a master’s degree in social work and jump into her chosen career field, which centers around work with juveniles.  Housel will no doubt continue on her very successful and impactful path, with the Outstanding Senior Award just the most recent step.

“I can go on about Jesseca, but I think you are getting the picture,” Drum concluded in her nomination.  “She is an awesome student, a great community steward and just an all-around nice person who is extremely deserving of this award.”